Donghia Lecture at the Museum of Contemporary Art 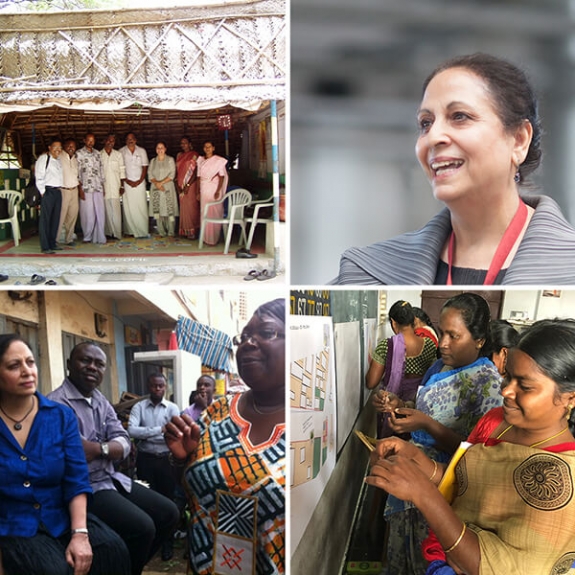 DR. GEETA MEHTA is an adjunct professor of architecture and urban design at Columbia University. She has worked on urban design projects in India, China, Austria, France, Ukraine, Colombia, Brazil, Jamaica, Ghana, Kenya, and the U.S. Geeta was recognized as one of the 21 Leaders of the 21st Century by Women’s eNews in 2015, and by HSBC Bank as the Social Entrepreneur of the year in 2017. She also serves on the New York City Mayor’s Waterfront Advisory Board.

Geeta is the founder and president of Asia Initiatives, a non-profit organization with a mission to help under-served communities through design and through empowering women. She is the innovator of Social Capital Credits (SoCCs), a virtual currency for social good that is being used in India, Ghana, Kenya and USA to incentivize participation in community improvement projects. In 2018, Asia Initiatives won the Happy City Competition to implement SoCCs in the capital city of Amravati in Andhra Pradesh, India. Asia Initiatives also received the Regional MIT Inclusive Innovation Award in 2019 for SoCCs.

Geeta is also the co-founder of “URBZ: User Generated Cities,” that works with underserved communities to help them transform their own neighborhoods through advocacy and by improving public spaces and homes

* Women in Amaravati incentivized through Social Capital Credits SoCCs) to design and become custodians for the public spaces in their village, photographed by Geeta Mehta

* A SoCCratic Dialogue with Abenaa Boateng and her Bantama Market community underway in Kumasi, Ghana photographed by Joe Addo