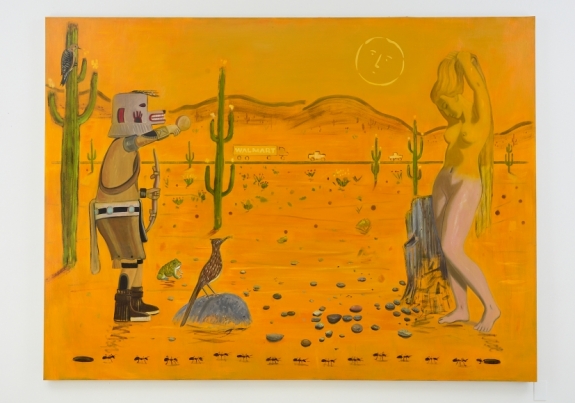 Raul Guerrero (b. 1945) grew up in National City, California. Located twelve miles north of Tijuana, Mexico, he was informed by an early experience of cultural and ethnic plurality. Ranging from Mexican indigenous crafts to tourist kitsch to the emerging local sub-cultures of Southern California, Guerrero’s identification with diverse forms of expression continue to inform his artistic production.

Guerrero has had solo exhibitions at the San Francisco Art Institute (1976), the Long Beach Museum of Art (1977), and the Athenaeum Music and Arts Library (2007 & 2013). His 1985 Oaxaca paintings were the subject of an exhibition guest-curated by Allan Ruppersberg at the CUE Art Foundation, New York in 2010. His 1989 retrospective exhibition was presented at the Museum of Contemporary Art, San Diego. Guerrero has been the recipient of an NEA Photography Fellowship (1979), and the San Diego Art Prize (2006). He lives and works in San Diego, California.