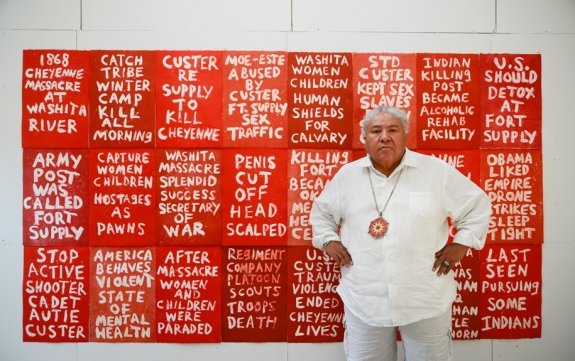 Edgar Heap of Birds, Cheyenne-Arapaho artist, educator, advocate for indigenous communities and distinguished alumnus of Temple University’s Tyler School of Art is a multi-media artist whose works range from drawings and paintings to monumental outdoor sculpture. Best known for his use of the written language, his pieces often incorporate short, sharp, painted messages. He “wields words like weapons,” wrote Art in America in a 2017 cover story about his life and his work. “The pithy phrases he scrawls on paintings and monoprints are searing indictments, calling out state violence against indigenous people.”

He was named a USA Ford Fellow in 2012. Currently professor emeritus in the Department of Native American Studies at the University of Oklahoma, Heap of Birds also has taught as a visiting professor at Yale University, the Rhode Island School of Design and the Michaelis School of Fine Art in South Africa. Before attending the Tyler School of Art, he earned a BFA degree from the University of Kansas in 1976 and attended the Royal College of Art in London.