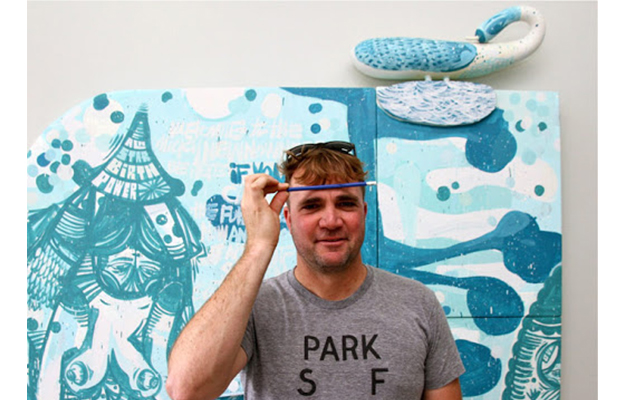 Thomas Campbell is a self-taught painter, sculpture, photographer, and filmmaker. He splits his time between his painting/sculpture/stuff making studio in Bonny Doon, California and traversing the globe making films. An artist who perpetually introduces his audience to new stages of his of his own artistic evolution, Campbell blends together scribbles, scriptures, slogans, and anecdotes to assemble multilayered, interconnected works that draw from a symbolic system of meaning and associations. Known as one of the artists of Beautiful Losers—a bi-costal collective inspired by various aspects of street art culture associated with graffiti, skateboarding, punk, and hip-hop—Campbell’s defiantly animated assemblages pay homage to the roguishly creative spirit of urban signage. His movement-oriented paintings are as layered with meaning as they are with paint. The works, typically composed of several panels, are free-flowing with wide expressionist swipes of color, bold graphics, and intricate renderings of characters and text. His photographs mimic the intensity of the paintings, yet in a more abstract fashion. Campbell has mounted solo exhibitions in New York, Paris, Tokyo, Denmark, the Netherlands, San Francisco, Los Angeles, and Morocco. In 1999, he completed his first feature length surfing film, The Seedling, and in 2004 released his second, Sprout, and has just completed his third, The Present, in the Spring of 2009. Campbell is also creative director for a small, independent record label, Galaxia, based in Santa Cruz, CA, which has released records by contemporary artists Tommy Guerrero, Bonnie “Prince” Billy, Peggy Honeywell, and The Black Heart Procession.