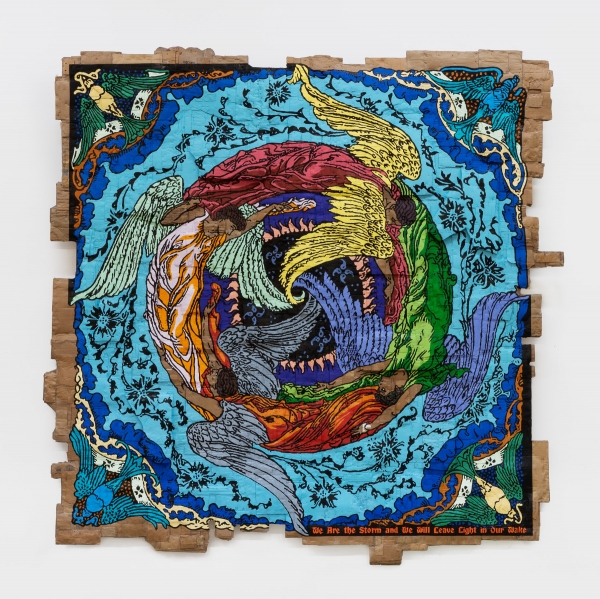 Since about 2000, Los Angeles based artist Andrea Bowers (b. 1964, Ohio) has been recording and amplifying the work of activists present and past. Her multi-media practice includes drawing, video, sculpture, and installation work that foregrounds the experience of the people who dedicate their time and energy to the struggle for gender, racial, environmental, labor, and immigration justice and those who are directly affected by systemic inequality. Over time, her different bodies of work have become a document of the changing language, prerogatives, and dynamics of social justice movements.

Known for her large drawings re-interpreting historical political graphics on found cardboard and her intimate pencil and colored pencil drawings of protestors, Bowers has made labor-intensive techniques and formal qualities of scale, color, and design central in her otherwise conceptual content-driven work. Her 2012 exhibition at Vielmetter Los Angeles, Help the Work Along, featured the first series of her monumental works on cardboard. These three large drawings, each 13 feet tall, reinterpreted political graphics from the early 1900s that include representations of powerful women. The material choices for the cardboard works were inspired by an essay written by Gregory Sholette in which he stated: “Meanwhile, Zuccotti Park and other OWS [Occupy Wall Street] encampments revealed a mix of high-tech digital media and handmade signs, a mix of the archaic and the new as if beneath the Internet there is cardboard.” Bowers has since expanded her use of cardboard to include large LED signs that display contemporary political slogans and widened the scope of the graphics she uses in her drawings on cardboard, beginning to mash up, edit, and otherwise re-configure images from the past to address the situation of our present and illustrate that these political struggles are ongoing.

Bowers’ practice seeks to present an alternate political history and locate the role of art in documenting and reconsidering the historical record. Alongside her object-based practice exists a second, but not secondary practice of building relationships with and supporting activists and activist groups. This aspect of Bower’s work centers on a politics of radical patience. This epistemological shift in her approach emerged when she was working with environmental activist Tim DeChristopher in 2009 – 2010 on a body of work documenting his environmental activism and the ensuing courtcase, The United States vs. Tim DeChristopher, which is also the title of a video the artist made with DeChristopher to document the parcels of land he bid on around the Arches and Canyonlands National Parks in Utah as part of an action to disrupt the sale of these lands to oil speculation. Many of Bowers’ projects include video works that center the voices of activists or offer the viewer an encounter with them or their form of resistance that encourages a similar type of patience and active attention.