Alumni Around the World 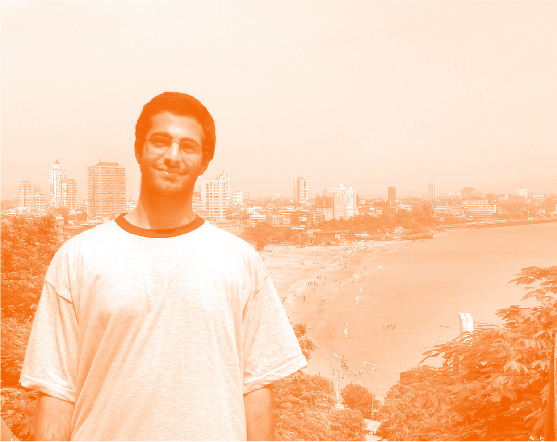 I started working at the age of 18 as an intern at a small boutique studio in Mumbai. While studying digital media, I interned in the summers and learned a lot about the entertainment industry in the U.S. After graduating, I did freelance motion graphic work in Los Angeles for a year.

Moving back to India was a difficult transition. The working conditions are quite different. When a film is close to delivery, I never go to work and return home on the same day. Facilities have showers and rooms for sleeping, and everyone works and lives in the office during these crunch times.

I always wanted to venture out on my own, and decided it would be ideal to do this while I was still young and living at home, not having to pay rent. I was lucky to meet an investor who wanted to start a partnership. We got office space, and everything looked like it was going to go through. He set up the infrastructure while I contacted people I knew in the industry, both in the U.S. and India.

Although this partnership didn’t work out, what really paid off was talking to my contacts and spreading the word. I got my first break through fellow alumnus Ben Go (‘00) of Brand New School. After that it’s been one project after another. CG Lab Pvt Ltd. (www.thecglab.com) has completed more than 350 projects in four years for clients from the U.S. Canada, U.K., France, Peru, and India. We have never advertised our service but depended on word of mouth. Our work focuses on postproduction and 3-D modeling.

Looking back, I realize that I built very strong foundation skills while I was at Otis, which were invaluable when I joined the profession. For me, another big advantage of Otis is the contacts I made. When I approach new clients to introduce our services, I mention the Otis alumni who work in their studio, establishing an immediate connection and comfort level. 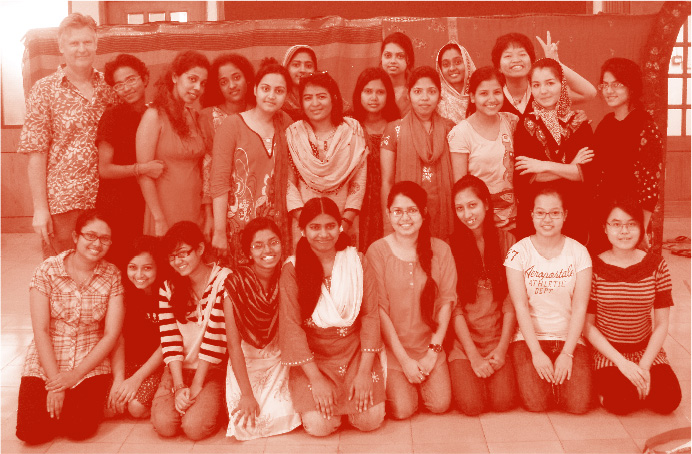 Otis. You introduced the first art class to a new university in Bangladesh. How did this come about?
Zokosky. My wife and I learned about the Asian University for Women from a friend who teaches there. She raved about the university, and mentioned the desire to introduce art into the curriculum. It’s privately funded, independent, and provides a free or subsidized liberal arts education to deserving women from the region. It’s located in the port city of Chittagong, Bangladesh. The students come from 12 countries including Afghanistan, Pakistan, Bangladesh, Nepal, Sri Lanka, Cambodia, Vietnam . . . it’s a broad cross section of the South Asian developing world. The more we looked into it, the more convinced we were that we wanted to go there and teach. The university opened in 2008 and they had not yet offered art classes. I teach drawing and painting, and my wife, Karole Foreman, is an actress and an acting teacher. We put together a proposal, and the university invited us to come teach summer courses. Karole taught introduction to acting, and I did a Foundation drawing class.

O. What were your impressions of Bangladesh?
Z. It’s an amazing country with remarkable people, huge challenges, lots of poverty, and an enormous population. It’s visually stunning and a little surreal.

O. What were the challenges?
Z. Since the students come from so many different countries, there had to be a common language. English proficiency is incredibly advantageous, so all classes are taught in English but the various accents were a real challenge at first. I learned that there are not any art supply stores in Chittagong, so I contacted some American manufactures, California retailers, individuals, and colleges for donations. They very generously gave lots of supplies, which we brought with us. In Bangladesh, the per capita income is $923 a year, so there’s a lot of poverty. The infrastructure isn’t what westerners are used to. There are daily blackouts and frequent hartals, which are widespread general strikes used as a political tool. The weather is a challenge too; we were there for the monsoon season and it was quite hot and humid. Bangladesh is about 95 percent Muslim and the university population is largely Islamic.

O. Was that an issue?
Z. Not really, the students dress fairly conservatively by Western standards and they were really eager to learn to draw. I was worried, being a male teacher, that I could unintentionally violate some social norms. The students quickly put me at ease about that; they were as adventurous and open-minded as students here. For life drawing, I had the models wear modest bathing suits.

O. What are the students like?
Z. It’s an all-female university, but there is profound geographic, social, and economic diversity. The students are all very smart, dedicated, and curious. Their attitude toward education is inspiring. They recognize the life-changing value of an education and they want to make it count. I interviewed dozens, and none mentioned money as a goal. Some of them come from small rural villages where women face great disadvantages, and they intend to return and improve conditions at home. Their sense of social responsibility was impressive. Their artistic growth was significant, and they saw the value in creative thinking for artists and in other spheres of life.

O. Has Bangladesh influenced your painting?
Z. I’m still processing it; that part takes time for me. One project that we’re involved in is a documentary film about the experience. So many people were very interested in what we were doing, and many donated money, books, and supplies. It’s a fascinating part of the world, and there’s lots of interest in the condition of women in the Islamic world. In our film we want to examine the experiences of of U.S. and Bangladeshi students. In hours of interviews and documentation of daily life, we collected remarkable content.

O. Will you be editing the film yourself?
Z. I’m applying for grants so that we can hire a talented editor. We’re looking for someone who is interested in this sort of issue.

O. Did you get involved in other projects there?
Z. I met local artists and lectured at an art gallery in Chittagong about the art scene in America and my own work. I mounted a show of student drawings. Karole adapted and produced the Greek classic “Medea,” and I got involved in theater sets and designed the poster. I also illustrated a book, which was just translated into Bengali, about how to raise healthy babies. I’m glad I have a broad art education and technical skills, because you never know what you might be called upon to do. Bangladeshi Women Making it Count