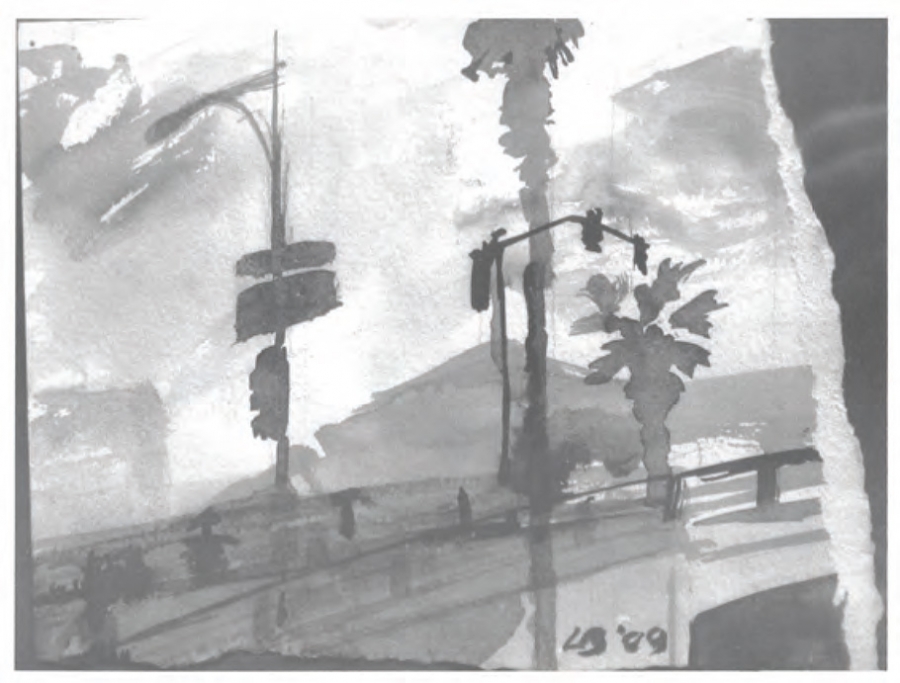 These are a few excerpts from Otis faculty, lecturers, and alumni that have written on and about Los Angeles. You can read more in OMAG #15.

Memory and Daily Life in the Invisible City

I must begin by mentioning the debt of gratitude I owe the Parisian poet Mohammed Dib, who consistently made me aware that L.A. was indeed the Invisible City, borrowing from me, as it were, the title for my literary magazine, Invisible City, which I edited with John McBride from 1971–82. During his stay in L.A., Dib would often smile capriciously and ask, as the afternoon began to cool, if it weren’t time to set off in my Datsun sedan and visit our invisible city, so that we might add to our “petites histoires.”

Poetry, for me, then, issues from the invisible city, the big nowhere that is L.A. Ours is a city of “theatrical impermanence,” as Christopher Isherwood called it, the home of tautological architecture where hot dog and hamburger and donut stands take on the shape of hot dogs and hamburgers and donuts, where at any given time only a little more than onethird of the population has lived there for more than five years. L.A. is blessed, in Tennessee Williams’ words, with “wonderful rocking horse weather, and a curious light so mesmerizing that, as Orson Welles once noted, ‘You sit down, you’re twenty-five, and when you get up, you’re sixty-two.‘” It functions, according to thepoet Thomas McGrath, as the “Asia Minor of the intellect,” a place where, in the immortal words of the legendary producer Irving Thalberg (namesake for the Academy’s Oscar for “life-time achievement”), the writer is no less than “a necessary evil.” L.A. is also a place that has afforded writers and artists, to borrow a phrase from long-time resident Igor Stravinsky, “splendid isolation.” Memory in so willfully forgetful a place is critical, defining an almost palpable dimension of daily life, which is all the more vivid in contrast to the perpetual elsewhere that best describes one’s writing practice there.

Time and place operate curiously in the daily and often dull ineptitude of a grammar that might describe such as fictive utility as L.A.

Time and place operate curiously in the daily and often dull ineptitude of a grammar that might describe such as fictive utility as L.A. Time, for instance, may function as a property of light, a perpetual present or “timelessness” in close relationship to the peculiarly isolate and meditative light that is the single most distinguishing characteristic of our city. “Lots and lots of light–and no shadows,” notes artist Robert Irwin, “Really peculiar, almost dreamlike.”

I am suggesting that a preoccupation with our daily bread is a poet’s attempt to ground his or her work if not exactly in some form of realism, at least in a realistic attitude or position within this wacky environment. Lacking the public occasion and certainly the public form for serious literature—museums and other educational and public institutions in our city are hardly more than specimen boxes in today’s cultural marketplace—some poets instinctively employ the daily to create a context for their work, social, dramatic or otherwise. In a city where the image is considered truthful, and entrepreneurs the likes of (fill in the name of whatever current pop culture boss) are discussed in university and college classrooms as creative geniuses, a poet may look to his or her own isolated daily life to fashion a background against which language may be given room for serious play.

Editor's Note: This piece is excerpted from a longer essay that first appeared in Seeing Los Angeles: A Different Look at a Different City, edited by Guy Bennett and Beatric Mousli; Otis Books/Seismicity Editions, 2007

And then it was autumn again, and Saturdays they would wake early when the first clean light came up over the oak and fir at the top of the ridge and eased its way down across their glass house and overgrown slope, down to the pitched yards and shingled cottages along the street below their street, down across timber and brush and fallen limbs, across the boulevard all the way to the patient lake, where it would linger on the water, and ancient and forgiving light by noon.

These were cold mornings suddenly and so they dressed quickly in fraying clothes. One made coffee, the other swip jam across toast. They traded sections of the paper. One started in on the crossword, the other scanned the financial pages. Then they headed out to the garage and pulled on work gloves and selected rakes and clippers, and there was little conversation except to agree the movie they had watched the night before was not sitting well with them. A simple story snapped when stretched into an epic. Actually one man fell asleep before the film ended, and the other man had to wake him only to guide him to the bedroom and back to sleep again.

Rain all week had left the air crisp but also made the ground behind their house muddy and not entirely suitable for the chore at hand, yet each man took a flank of hill as if it were his side of the bed and began pulling out the dead sage and trimming back the excess tea bush and clearing out the persistent sumac. There was nothing to be done about the thicket of rosemary, they’d long since given up. There was enough of a drop-down to the backyard of the property below theirs so that even at the edge of their land, they enjoyed an unobstructed view of the Silver Lake Reservoir. 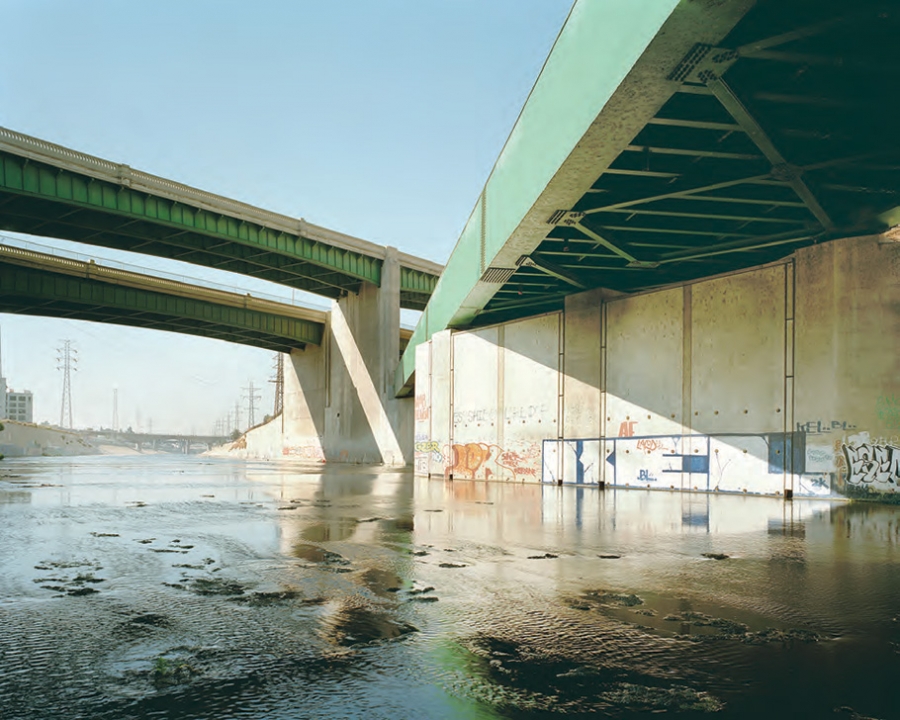 From Confrontation to Cooperation

In the late 1930s, in response to a pair of deadly floods, the L.A. County Board of Supervisors called in the U.S. Army Corps of Engineers to control the unruly L.A. River. The mission was to get the water to the ocean as fast as possible. The idea that it might make sense, in a city that gets less than 15 inches of rain a year on average, to conserve some of
those hundreds of millions of gallons of freshwater seems to have never occurred to the Army Corps.

It took many years, thousands of workers, and some 3 million barrels of concrete to bring the river to heel. By some measures, the project was a triumph: floodwaters have not topped the river levees since. But it was also an ecological holocaust.

Within a very few years, important native species were largely gone. Yellow-billed cuckoos and least bell's vireo no longer sang in the watershed. Red-legged frogs, which hibernated by burrowing into the river bottom’s mud, couldn‘t penetrate the concrete. For half a century after the work was finished, the river was little more than a concrete scar, separated from the city by chain-link fences topped with razor wire and signs warning visitors to keep out or face fines and/or jail.

In 1986, Roger Wong, Pat Patterson and I borrowed some wire cutters, snipped the fence that separated the river from the city, and declared the river open. We asked the river if we could speak for it in the human realm. We didn't hear it say no, and Friends of the L.A. River was born. FoLAR began life as a performance piece in a basement theater on Skid Row as a "40-year artwork to bring the river back to life." I donned a white suit and painted myself green as if i were the ghost of William Mulholland.

In the mid-1980s, a lawsuit by Heal the Bay forced L.A. to build a water reclamation plant that would ultimately send millions of gallons a year of reclaimed water through the Glendale Narrows. For the first time since the last Ice Age, the river was year-round. Willows and sycamore trees began to reappear.

In preparation for a predicted El Niño, the County and the Army Corps decided to bulldoze everything growing in the river's natural bottom. Standing in front of the machines, I nearly got myself killed. But the action got FoLAR its first meeting with the head of the L.A. County Department of Public Works. Every time he said the words "flood control channel," I interrupted him and said "river." I had planted the linguistic seeds. Today nearly everybody calls it a river.

Every one of these victories was the result of patience, willpower, and perseverance. Yet none of them opened up the channel itself. In 2010 it was still a crime to stick your toe in the river. Then, this fall, after seven years of work and almost $10 million, the Army Corps released a study with a range of alternatives for the river's future.

It was a stunning development. FoLAR could now work hand in hand with the Army Corps to restore miles of habitat, eliminate miles of concrete, restore wetlands, and reconnect the main stem of the river to the mountains.

As I look back on a lifetime of poetry and politics, on 27 years of working on the river, I see a journey from confrontation to cooperation. It has created a wider and deeper community not just of humans but of flying, swimming, and four-legged creatures as well.

A longer version of this Op Ed piece appeared in the Los Angeles Times, October 27, 2013.