Alum AUSTYN DE LUGO ’17 was awarded a teaching fellowship at the Armory Arts Center in Pasadena.

Alum SHIRIN BOLOURCHI ’17 and grad ALEX KAY (Meshki Collactive) showed their work in Art Bazaar, on August 19 and 20, 2017 in the OR gallery in MFA Fine Arts in Culver City.

Alums LISA OXLEY ‘12 and ANDREW CURREY ’14 showed their work in Plus One at the Museum Of Broken Relationships in Hollywood CA on august 19, 2017.

Alums ANA RODRIGUEZ ‘09 and BRIAN RICCI ’12 showed their work in Velocity at Launch LA in Chinatown on August 5, 2017.

Alum WAKANA KIMURA ’11 is showing her work in Journeys: LA Communities Through the Eyes of Artists at Union Station Los Angeles. She led a TOUR on Saturday, August 19th 2017. KIMURA's new Mural in collaboration with calligrapher Kuniharu Yoshida is ready to view at the Wolf & Crane Bar in Downtown Little Tokyo.

Alum RAUL BALTAZAR ’13 will participate in the PST LA/LA, chapter of A Universal History of Infamy, to be installed at Charles White Elementary School.

Alums YRNEH BROWN ’17 and AUSTYN DE LUGO ‘17 completed a July residency at the Fundacion Sebastian in Mexico City and mounted their exhibition “Hidden Roots and Symbols.” and “A Veces Se Me Olvida Que Soy Un Monstruo” at the end of July 2017. 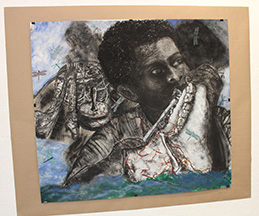 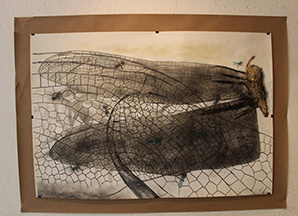 SHIVA ALIABADI ’14 is in a group show in the Bruno David Gallery in Clayton, MO called LA Painting: Formalism to Street Art curated by Andi Campognone from Sept. 2 to Oct. 7th, 2017.

The exhibition XYZ at Durden and Ray is from Aug. 5, to Aug. 26, 2017 is Curated by alum ED GOMEZ ‘03 and Brian Thomas Jones and includes artist ED GOMEZ.

GPP Alum MARIO MESQUITA ’14 will be working over the summer in Santa Monica on a publicly engaging project, and Michelada Think Tank has been active and invited to Art Center in Boston.

Alum KARMA HENRY ‘10 will be part of the Summer Showcase at the Museum of the Plains Indian in Browning, Montana. The show runs from August 4 to October 6, 2017. She will also be part of GBNA group show at Truchee Meadows Community College from July 1 to September 6, 2017. In August 2017 she will be part of the 96th Santa Fe Indian Market August 19-20, 2017.

Alum LAWRENCE GIPE's ’86 painting “Panel No. 4 from Futurama (Apotheosis)” is currently in the "Art of Our Time" exhibition of the permanent collection of The John and Mable Ringling Museum of Art, Sarasota, FL. GIPE's reviews have been recently published in WhiteHot Magazine of Contemporary Art and Squarecylinder.com.

Alum MICHELLE ANDRADE (MFA ’07) has work included in the 32nd Biennial of Graphic Arts at the International Centre of Graphic Arts in Ljubljana, Slovenia, from June 16 until October 29, 2017.

Alum DONNA PAYTON ’80 has curated a group exhibition Animal Architects that has travelled to different venues in NJ and is now at Monmouth Museum, Lincroft, NJ from May 21 to Sept. 3, 2017.

Alum LORENZO HURTADO SEGOVIA ’07 will be showing his new sculptures at CB1 Gallery in Vida Pasión y Muerte from September 9 to October 21, 2017 as part of Pacific Standard Time LA/LA.

Alum LUIS G. HERNANDEZ ’03 is in: Down and to the Left; Reflections on Mexico in the NAFTA Era at the Armory Center for the Arts, Pasadena from May 07 to September 17, 2017

Alum RANDI GANULIN ’96 is one of eight artists commissioned by the Seattle Office of Arts and Culture to create a piece for the 2017 Seattle Center Sculpture Walk! ‘Indra's Net,’ will be installed in time for Bumbershoot Arts Festival at Seattle Center, Labor Day weekend, and will be up for 5 months.

MFA Professor TODD GRAY was in My Life in the Bush with MJ & Iggy curated by Emily Kuhlmann at MoAD in San Francisco from April 26 to August 27, 2017.