Alum TODD RICHMOND ‘16 is showing his exhibition "Dark Forrest" at TOPAZ ARTS Gallery in NY from March 4 to April 1, 2017. http://www.topazarts.org/2017/02/topaz-arts-presents-dark-forest/

GFA Professor JUDIE BAMBER has a one-person exhibition The Old Maid And The Dead Man at GFA Assistant Chair ANNETTA KAPON’S Proxy Paris Gallery at the Galerie Ygrec in Paris from March 16 to April 23, 2017.

Alum MATTHEW CARTER ’10 is in a three-person exhibition Glitter Bold at Jai and Jai gallery in Los Angeles from March 4 to April 1, 2017.

Alum RACHEL WOLFE ’15 had a work (Teknovisuell Experience from Virtual Material) permanently installed in the admissions office at Otis.

Grads AUSTYN DE LUGO and ROBERT BEGLEY were selected to take a workshop at Anderson Ranch Art Center in summer 2017. 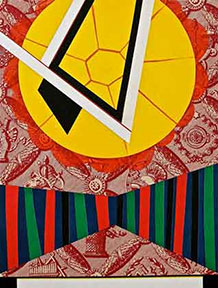 Grad IRENE FLATLEY had her MFA exhibition shutter drunk at the Bolsky Gallery from February 14 -18, 2017.

Grad EMILY THORPE had her MFA exhibition Literally at the Bolsky Gallery from February 20 - 25, 2017.

Alum CHRIS OATEY ‘06 was in a two-person show at David B. Smith Gallery in Denver CO from Jan. 20-Feb 18, 2017. http://davidbsmithgallery.com/exhibit/show/chris-oatey-dylan-gebbia-richards-2017

Alum SUSAN HOROWITZ ’00 is in a two-person exhibition TEL AVIV: THE WHITE CITY AND BEYOND at AJRCA- Academy of Jewish Religion in Los Angeles from February 12 to May 28, 2017.

GFA professor JUDIE BAMBER took part in the group exhibition Not I, We at Gavlak Gallery on January 28, to April 1, 2017.

Grad LUCAS MCDANIEL had his MFA exhibition An Illustrated Book about Birds at the Bolsky Gallery from February 2-11 2017.

Alum SUSAN HOROWITZ ’00 has a new project at someshulmanarchitecture.com.

Grad JOSELYN CASAS won the Board of Governors Award for excellence for a second year MFA student.

Alum TAMI DEMAREE ‘03 showed her work in the group exhibition Twilight and Lowlifes at Meliksetian Briggs Gallery from January 24 to February 18, 2017.

GFA Professor KATHRIN BURMESTER had a one-person exhibition Since I'm Being Honest With You at MiM Gallery in Los Angeles from January 14–February 11, 2017

Alum ED GOMEZ ’03 participated in the exhibition THE COLLECTIVISTS (with Darden and Ray) at the Brand Library & Art Center from January 21 to March 11, 2017. Organized by independent curator Cara Tome.

Alum SHIVA ALIABADI ’14 was recently honored with a one year residency and staff artist position at Vermont Studio Center for 2017. She is also in a group show at Red Mill Gallery, in Johnson, Vermont, called live/work from Jan. 26th through Feb. 28th, 2017.

Alum JEISUNG OH ’16 was awarded an artist’s residency in the south of France called “ Les ateliers des Arcs” from April to July 2017.

For the months of January and February 2017 Proxy Gallery hosted INTERIORS, the work of JENNY ZIOMEK. January 10 to February 28, 2017.

Alum JANET DANDRIDGE ’16 was awarded the 2017 Otis-Cergy Residency exchange and will spend three months in Paris from February to April 2017.

Alum ZEAL HARRIS ’07 has work in “60 Americans II” curated by Terrence Sanders at the new Makeshift Museum in downtown Los Angeles. This group exhibit will continue touring on to New York in the Spring of 2017.