Just outside the entrance of the Millard Sheets Library at Otis College of Art and Design is what looks to be a little bookcase garden—triangular structures with brightly colored shelves housing a variety of plastic containers and terra cotta pots. 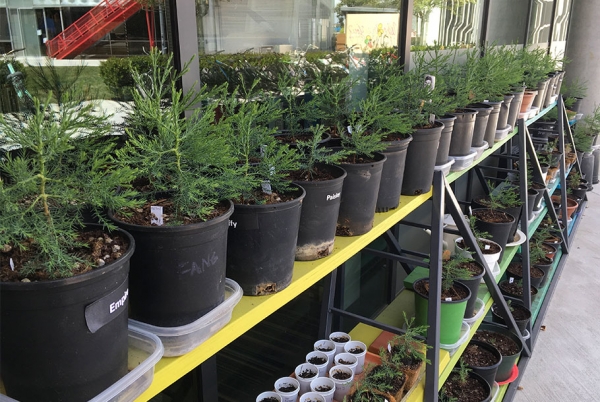 On any given day you might see Shelley Forbes, Otis College alum and the library’s circulation manager, tending to the “garden,” but she’ll be the first to tell you these pots hold something much more grand than your typical houseplants: each one is a giant sequoia at the very beginning of what will hopefully be a three thousand year lifespan. They’re part of Forbes’ Find Your 100 project, which she aptly named 100 Giants. With the help of the re-wilding nonprofit WildPlaces, these 100-plus seedlings will be taken to the Trail of 100 Giants in California’s Giant Sequoia National Monument and planted. There they’ll be an important environmental addition to the state, (because of their longevity and massive size, giant sequoias transform more carbon dioxide than any other tree on earth), as well as an awe-inspiring reminder of the change that can take place when one person puts an idea into action.

When Forbes first heard about the Find Your 100 campaign celebrating Otis College’s centennial, she says her response was instantaneous: “I immediately said, My 100 is a hundred giant sequoia trees.” Her affinity for the giant redwoods started in childhood when her family would visit the Belknap Campground in the southern Sierras. “There was one tree in particular that, even as a small child, I said, That’s my tree. Now I’m 57 and it doesn’t look any different. They’re just steady. In fact, I think this tree is probably the only steady thing in my life,” she says with a laugh. 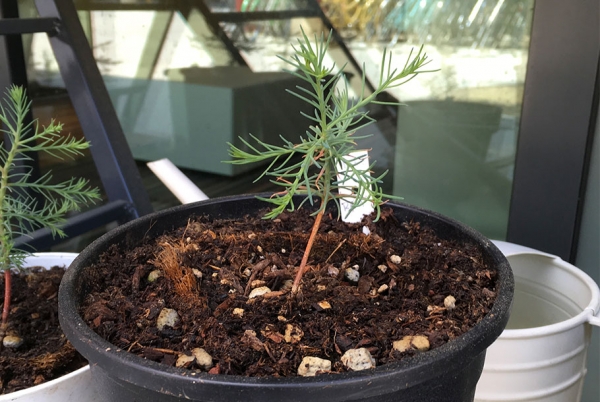 Getting others on board with her idea to raise a hundred Sequoia seedlings wasn’t difficult; she went office to office recruiting participants, handing over kits containing seeds, soil, and instructions on how to plant them. Of the approximately 75 “growers,” most were staff members, a few were faculty, and professor JoAnn Staten even recruited the students in her Amazon rainforest class to participate. The result is 133 seedlings in various stages of growth, and since sequoia seeds can take anywhere from two weeks to a year to germinate, Forbes thinks that number will likely grow. And the response has reverberated far beyond those who actually got their hands dirty; it’s a project that’s brought the whole campus together. “I had one woman say that when she’s having a terrible day she comes and looks at the trees and it perks her up,” Forbes says. “I’ve been out there watering and have had students tell me how important seeing this has been to them—what it represents is basically bringing life into the world.” 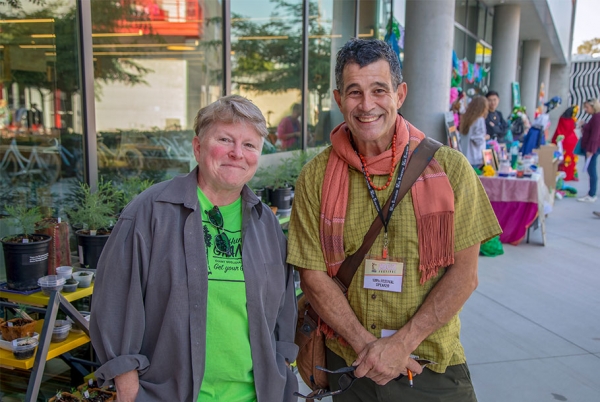 Shelley Forbes with WildPlaces founder Mehmet McMillan at the 100% Festival.

People who want to get involved with sequoia reforestation can contact WildPlaces directly, or find Forbes on campus, she’s happy to share her knowledge. “Oh, joy cannot even begin to explain how this has made me feel,” says Forbes, a sculptor and a painter who admits she’s not typically a collaborative person. But this has been a communal effort. One she hopes will inspire others to turn their passion into action. “Take a good look around and see who you think might actually help you make the dream happen. If it’s a big project like this you definitely need a village,” she says. “But ultimately just don’t be afraid of your own ideas.”