This year’s report details the impact of COVID-19 on the creative sectors of California.

This morning via a virtual event (which can be rewatched by pressing play above), Otis College of Art and Design released its findings for the 2021 Otis College Report on the Creative Economy, featuring remarks from Otis College President Charles Hirschhorn and Karen Bass, U.S. Representative of California’s 37thCongressional District. The Report this year provided insight into the major disruptions that have occurred throughout the creative economy of California and the United States due to the COVID-19 pandemic, as well as pathways to recovery for the hard-hit creative sectors that make up well over 10 percent of California’s overall economy measured by GDP.

“Last year’s events had some of the most disruptive impacts on the Creative Economy in recent memory. This year’s Otis College Report on the Creative Economy should prove to be a critical resource on how we can recover. In its pages you will find evidence of the growing importance and strength of the creative industries, along with stories of how the COVID-19 pandemic has interrupted that progress. The world looks to the creative sectors for uplift and inspiration this year and it’s important that the recovery keep these sectors front and center. As policymakers look for ways to revive the economy, we hope the Otis College Report will provide a key resource,” said Charles Hirschhorn, President of Otis College of Art and Design. 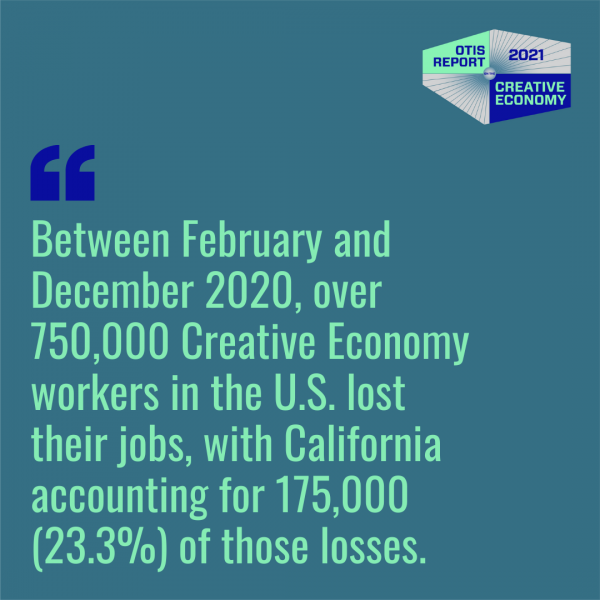 The 2021 Otis College Report on the Creative Economy continues Otis College’s partnership with Beacon Economics to produce the report, detailing findings and data on the five creative industries of Architecture and Related Services, Creative Goods and Products, Entertainment & Digital Media, Fashion, and Fine Arts and Performing Arts throughout the state of California.

Additionally, this year’s release event included a special presentation from Julie Baker, Executive Director of Californians for the Arts, who released two surveys about the pandemic’s impact on arts workers and arts organizations throughout the state. These surveys detailed the ways individuals in the arts and arts organizations have been directly affected by shutdowns and extended closures, alongside policy suggestions geared towards the recovery of the arts sector. Respondents to the survey provided data on topics such as income loss, employment security, and the effectiveness of government financial assistance for both organizations and individuals. 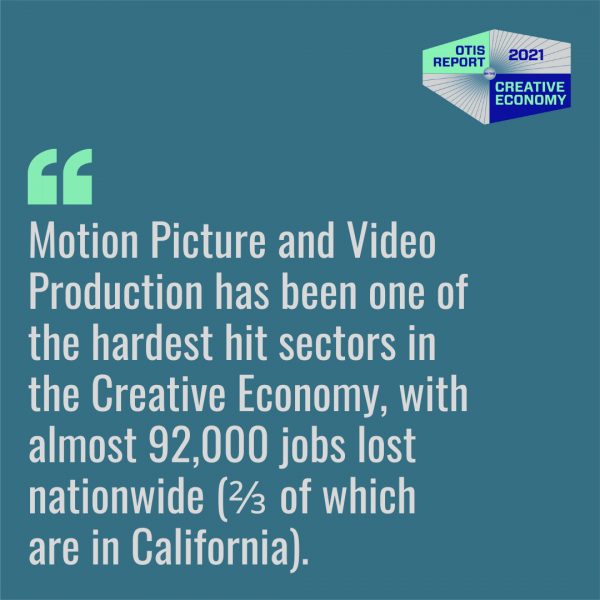 “There is no art without artists,” said Julie Baker, Executive Director of Californians for the Arts. “Advocacy organizations like ours use this report to build the case to policymakers that arts are good for business and a high-return investment worth making. Now the evidence, particularly in our own COVID-19 impact surveys, show that the arts worker, with an emphasis on performing arts, are among our most vulnerable workforce. They are suffering from a combination of fragile economic foundations, devastating and immediate loss of income, and a lack of safety net infrastructure to support them while the live events industries remain closed and without a road map to even know when they will reopen. Our survey provides insight to how workers are barely hanging on and are contemplating leaving the industry and the state.”

The 2021 release event also included a panel discussion on the topic, The Recovery of the Creative Economy: From the Nation to the Neighborhood, which explored the impacts of the COVID-19 pandemic on the arts and culture industry, discussing pathways to recovery both locally and nationally. Moderated by design and architecture journalist Frances Anderton, participants included Ben Allen, California State Senator, 26th District; Julie Baker of Californians for the Arts; Jason Foster, President and COO, Destination Crenshaw; and Gustavo Herrera, Executive Director, Arts for L.A. 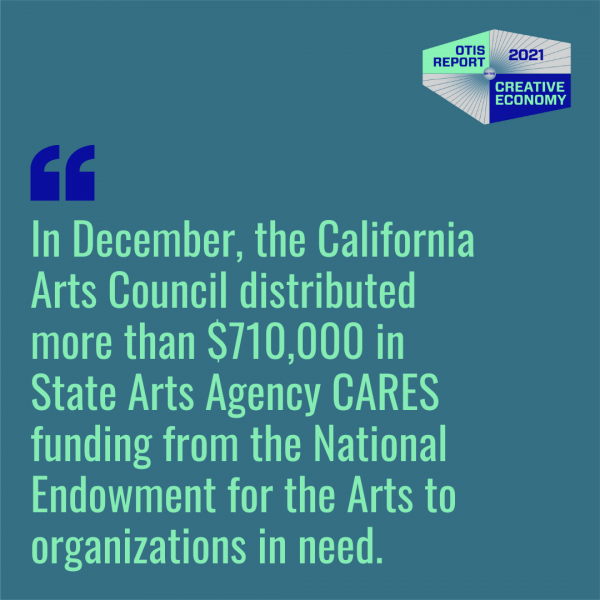 The Report, now in its fourteenth year, has become highly recognized throughout the state of California and throughout the world as a key indicator of creative economic activity for the world’s fifth largest economy. The Otis College Report is downloaded annually by people from over 35 countries as a model for documenting the creative sectors.

Significant findings in the 2021 Otis College Report on the Creative Economy include:

Significant findings in the Californians for the Arts COVID-19 Economic Impact Survey include:

The 2021 Otis College Report on the Creative Economy is available to download as a PDF from a dedicated, interactive website, which also allows for a greater investigation into the report findings at https://www.otis.edu/2021-otis-report. The Californians for the Arts COVID-19 Economic Impact Survey is available for download at www.californiansforthearts.org.

Support for the 2021 Otis Report on the Creative Economy has been provided by the City of Los Angeles Department of Cultural Affairs; The Ralph M. Parsons Foundation, Sony Pictures Entertainment, and Marsh.