Architecture and Landscape Lessons Learned from the Woolsey Fire 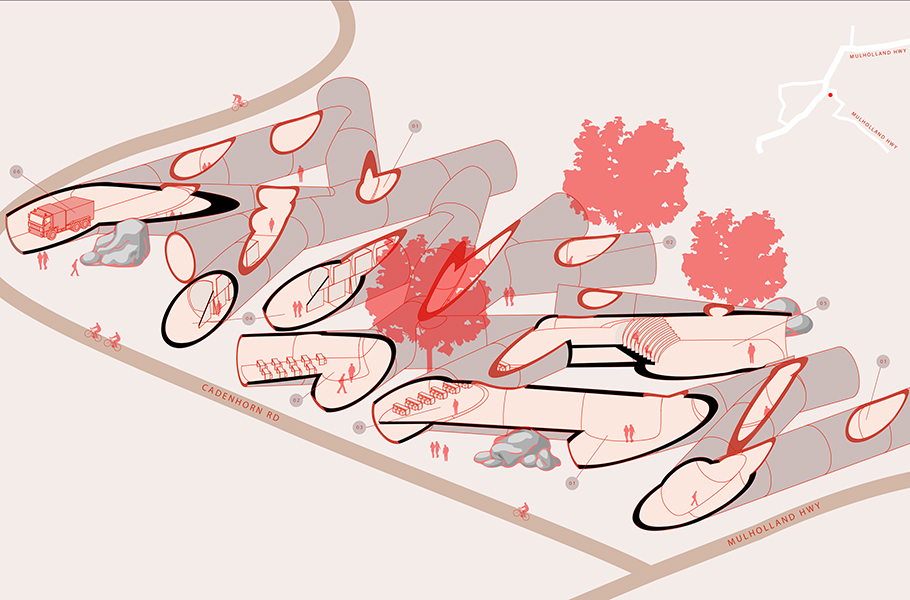 The work of A/L/I Studio 6 students can be applied to the recent Saddleridge fire and other area hot zones.
Lisa Butterworth

Life often imitates art, but it was an unfortunate turn of events when life imitated Greg Kochanowski’s field of research. Kochanowski, an Otis College Architecture/Landscapes/Interiors instructor, and Architecture Studio Director at Rios Clementi Hale Studios, had been researching fires, rain, and debris flow in relation to arid climates and architecture for about five years. At the 2018 ASLA (American Society of Landscape Architects) Conference in Philadelphia, he led a session called “Fires, Floods, and Slides: The Other Impacts of Climate Change.”

Several weeks later, Kochanowski and his family lost their home, which had been nestled in the Santa Monica Mountains, in the Woolsey fire. “It’s just kind of weird, living the research,” he says. “I have to say, although it was horrible, there is good that’s coming out of it.”

One of the upsides, he says, is the incredible sense of support he’s experienced: “It’s been a rallying of community.” Another is the way that personally experiencing the tragic intersection of architecture, landscape, and climate change has shed light on his own research. “A lot of the work was fairly abstract. As much as you’re digging into a subject matter, it’s still relatively removed,” he says. “So when [something like this] happens, it becomes much more real, and much more visceral. You have a completely different perspective—and other issues come to light—than you ever had before. I found that to be a very positive experience.”

Kochanowski’s experience turned into a positive one for his students as well. Every spring he teaches “Studio 6: Architecture and Landscape,” a course typically focused on a city outside of Los Angeles. Past classes have studied and traveled to Boston, Seattle, New York, and Chicago, understanding each location “from an urban planning standpoint, an architecture standpoint, and a cultural standpoint.” But in the wake of the Woolsey fire, Kochanowski says, “it felt almost absurd to go to another city and then pretend like all the stuff that was happening back in L.A. hadn’t happened, or was somehow not relevant to the studio.” Along with A/L/I department chair Linda Pollari, he made the decision to stay local this past spring semester: “There are real lessons to be learned here right now,” he says. 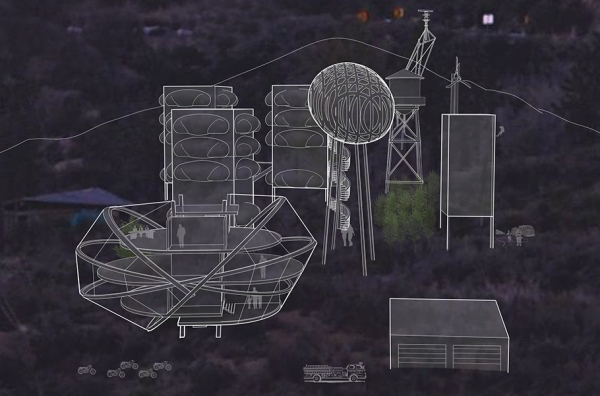 Eleven Studio 6 students were tasked with creating a wildland firefighter training center situated in Cornell, California, just outside Kochanowski’s devastated community. The project was topically relevant, but it was also particularly suited to the studio’s exploration of structure and landscape; a training center needs classrooms, meeting spaces, and overnight residences, as well as an exterior training area where firebreaks and other training exercises can be practiced. “The students had to think through the idea of landscape in relationship to architecture in a much different way,” Kochanowski says. “Landscape was no longer just a green blanket, or a bunch of trees. It was actually a working condition.” Students also had to consider the center’s placement in a Wildlife Urban Interface, its fire zone hazard, and the possible paths of debris or mudflow from post-fire rains. In other words, they had to design with the idea that landscape isn’t static, but rather temporal in nature. “It forced them out of their preconceptions of what architecture would be, meaning it’s not just a nice, pretty object that you look at. It actually has to engage the environment within which it exists,” Kochanowski says. “We also had these other discussions of, ‘What is architecture’s role within an environment?’” 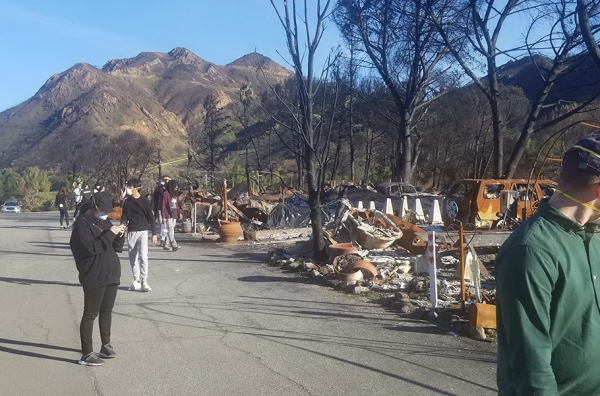 The students got first-hand exposure to this idea with several days of impactful field trips, including a walk through Kochanowski’s community, a tour of the famed La Casa de Maria retreat center in Santa Barbara—in the process of rebuilding after mud and debris flow following 2017’s Thomas fire caused severe damage—and a visit to a Cal Fire wildland firefighting training center in Camarillo. Paired with Kochanowski’s personal experience, and his openness about his community’s rebuilding process, the studio surpassed its curriculum and became what students told Kochanowski was a “rewarding and meaningful” experience. “I think it helped for them to have a real-life example in the room, that I would share with them what I had gone through, and what my community had gone through,” he says. “It helped them more fully understand the problem that I was also describing to them in relatively abstract terms at the same time. They were able to get a more holistic vision of it.”

The studio’s focus was indicative of the A/L/I program’s growing pillar of social responsibility. “More and more, it is a huge issue, and we’re moving toward that,” says Pollari. “And I try to move my faculty toward that.” 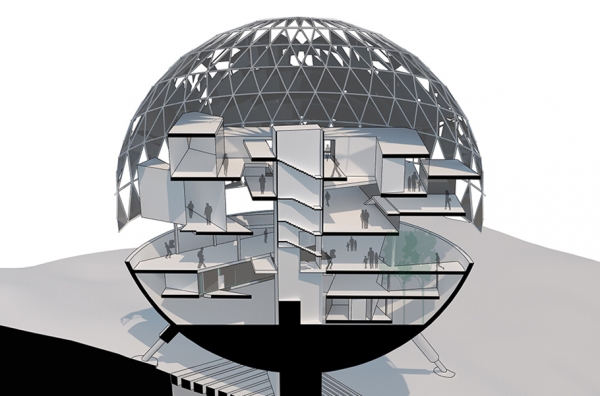 Kochanowski, who’s been teaching at Otis College for over 15 years, agrees that social and environmental stewardship—always important at the school—have become even more of a priority. “It’s what defines our time in a lot of ways, and it feels almost like, if you’re not engaging it, you’re being irresponsible to a certain extent,” he says. “I feel that definitely within the program, and within the student body, for sure. The student body even demands it in a way, they ask the questions.”

The relevance, urgency, and personal nature of last spring’s Studio 6 helped put that social responsibility into practice, and gave students an idea of the part they can play in shaping a better future, which is particularly prescient given that “fire season” is upon us. “Maybe it even helped them to understand these much broader issues of climate change in a much more personal way. Working through it you start to understand what everybody’s talking about a little bit more, and how we as designers could use our skills to start to shift some of the effects of climate change,” Kochanowski says. “I think that’s where design comes in—to help people imagine a future, or a potential of the world in which we live. For architects and landscape architects and urban designers, I think that’s our role, and hopefully the students understood that, through the studio, that’s what they were doing.”