The Artist That Launched 100 Ships

Hanging on the wall of painter Kim Russo’s art studio, is a cross-stich sampler depicting a large, masted sailing ship, which she found several years ago at a flea market in Pennsylvania while visiting family for the holidays. “I just walked over to it, asked how much it was, and bought it,” says Otis College of Art and Design’s interim Provost (she is also Dean of Graduate Studies). “There was probably less than 90 seconds between when I saw it and when it was in my arm being carried out.”

Don’t Wait for Your Ship to Come In

So what is it about this sampler that she found so compelling? “I love how imperfectly and awkwardly it’s stitched,” she says with a laugh. “And I love what it says because it rings true for me in many areas and ways in my life.” What it says is this: “Don’t wait for your ship to come in—swim out after it.” A sentiment, she realized, that uncannily reflects Otis College’s Find Your 100 campaign. “I was really struck by Find Your 100, which is basically a phrase that’s saying two things to me. One is, What does it take to actually be successful at something as an artist and designer? And secondly, it’s saying, It takes a hundred percent of what you’ve got,” she says. “That’s what this cross stitch is about. A hundred percent is swimming out after it.”

It was that realization that sparked her “Don’t Wait for Your Ship to Come In” project: 100 paintings (the same 11”x14” size of the sampler) depicting 100 ships, being sold for $100 each, with 100 percent of the proceeds going to the Otis College of Art and Design Centennial Scholarship Fund. The paintings, mostly done in Kim’s signature watercolor style, each features a different kind of ship—from sailboats to galleons to tugboats and even pool floats (“The definition of ship is being stretched,” she jokes). And every painting bears the motivational phrase from the cross-stitch sampler. Check out a few examples below. 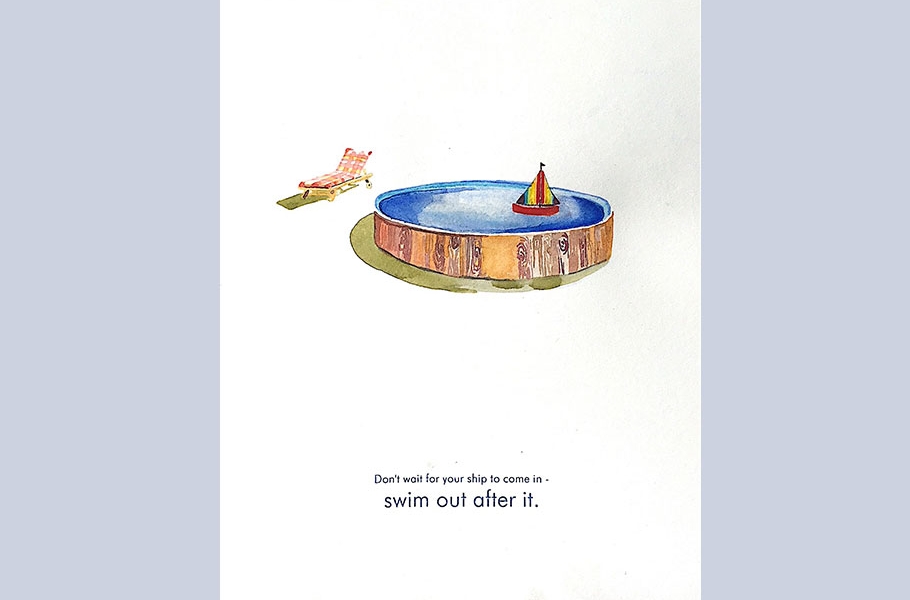 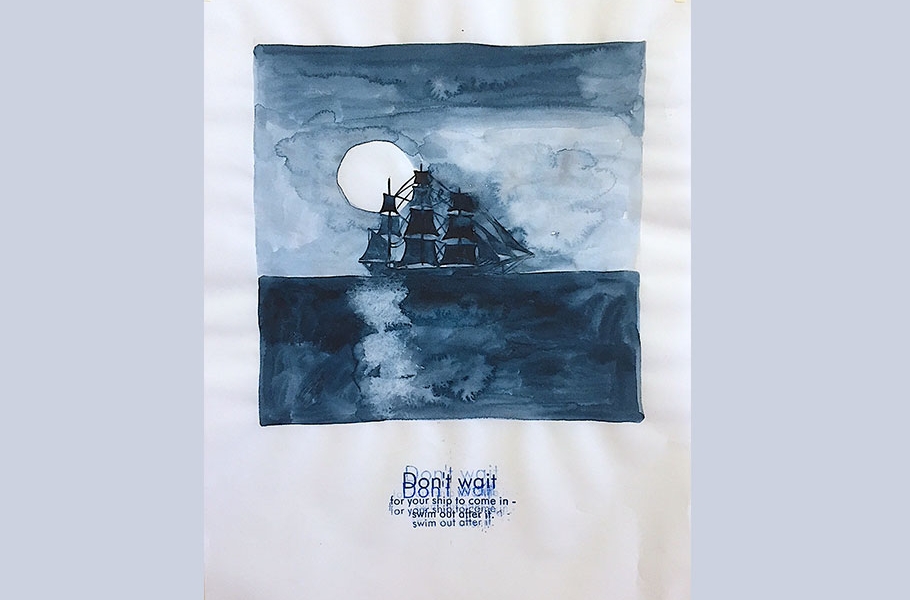 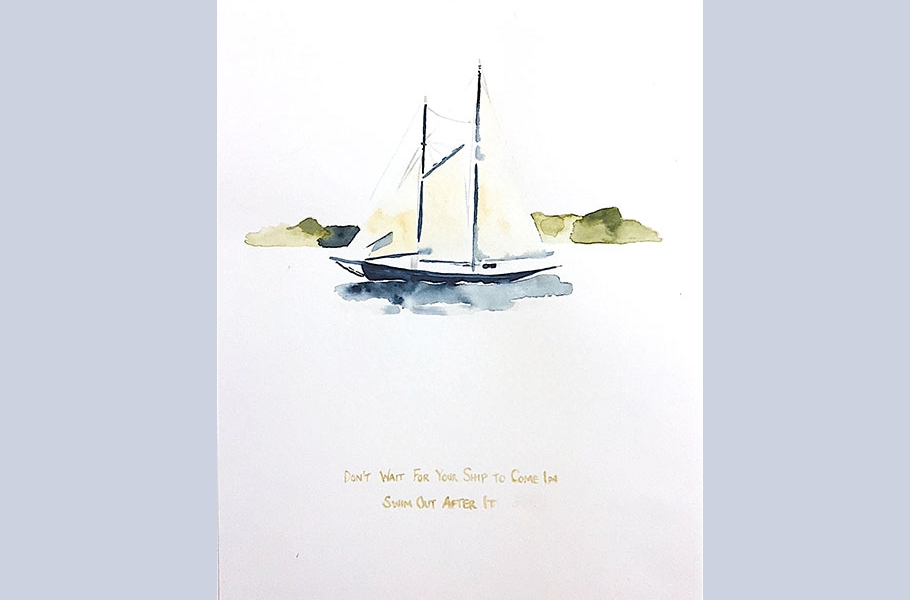 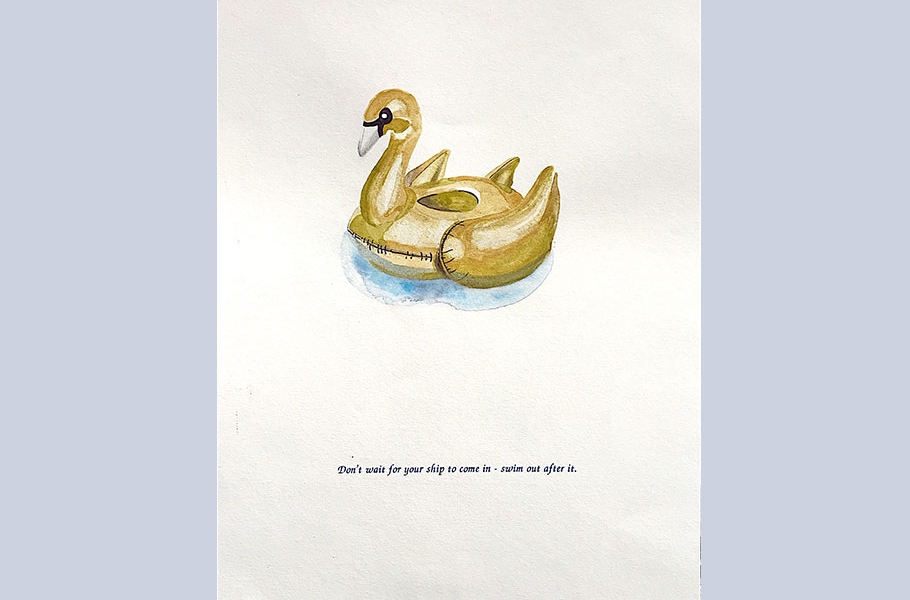 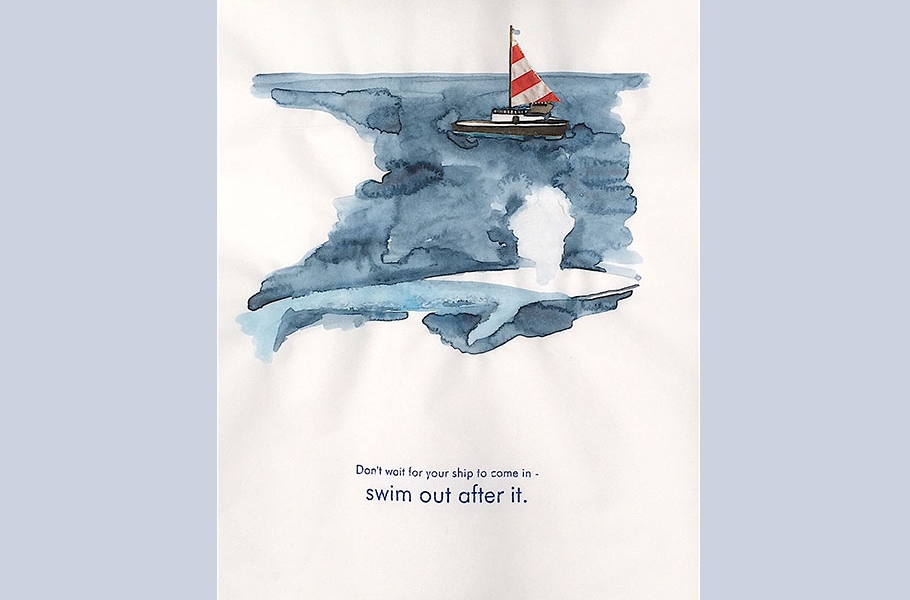 Giving back to the people who are engaging with the work

At the time of our chat, 20 paintings had sold, raising $2,000 for students at Otis. One of Kim’s favorites, a rainbow-sailed toy boat floating in a raised pool, even pulled what she calls “double-duty”: “It was purchased by a friend who works for an LGBTQ support organization in Tacoma, Washington,” she says. “She bought it for that organization’s fundraiser and it went for $300 in their silent auction.”

When we speak, Kim’s just returned from the AICAD (Association of Independent Colleges of Art and Design) conference in Chicago, and is one week into being displaced by the Southern California Woolsey fire, which mandated an evacuation of the Topanga neighborhood where she lives. In other words, she has a lot on her plate. “I have to say that it’s taking 200 percent of me to be doing my current job and trying to get a hundred of these [paintings] created. But I’m committed to doing it.” This, she says, is a project worth the extra work. “I wanted to find a way that I could do a 100 project that was actually giving back to the institution and giving back to the people who are engaging with the work. So I feel humbled and thrilled every single time one sells. It just feels like it’s working to do what I want it to do, which is to be an inspiration and to provide the resources for someone to continue to be inspired to do their work here.”

See all available ships, every purchase supports a student pursuing their 100%. Don’t Wait for Your Ship to Come In is part of 100 Projects, a Find Your 100 Centennial campaign initiative highlighting artists, designers, and other creative persons, with unique perspectives and approaches, who are interested in displaying their 100% commitment. Find out how to submit your work. 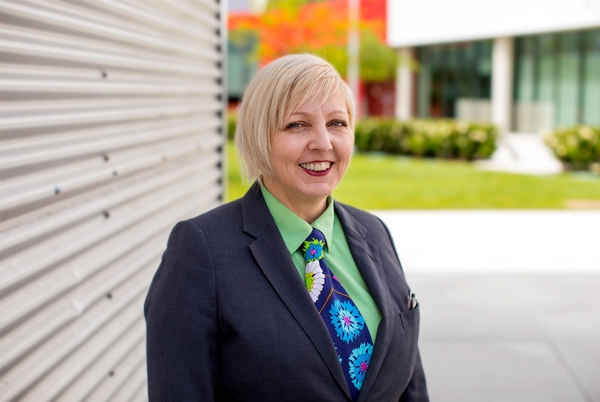 Kim Russo was born in Darby, Pennsylvania, a suburb of Philadelphia. She received her BFA from Tyler School of Art (Temple University) and her MFA from Indiana University, Bloomington, both in painting.  Her work is in the permanent collections of the Hilliard Art Museum, the New Mexico Museum of Art and the Cornell Fine Arts Museum.  She has received residency fellowships from the Frederick P. Lenz Foundation, Caldera, the Atlantic Center for the Arts, and Americans for the Arts. You can view more of her work at kimrusso.net.