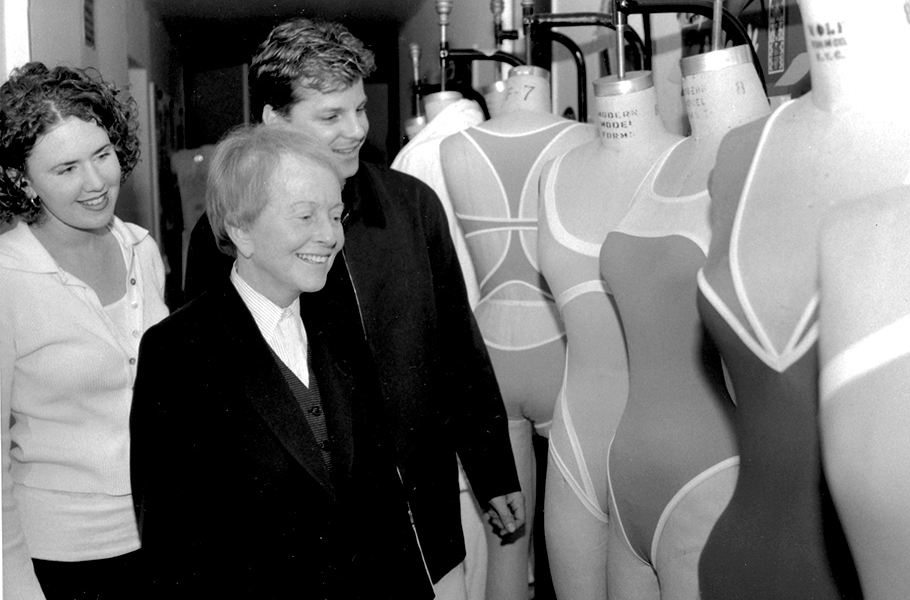 Pieces from the Anne Cole mentorship in 2015 at the Annual Scholarship Benefit and Fashion Show.

Iconic Californian designer Anne Cole, creator of the tankini and devoted fashion mentor at Otis College of Art Design, passed away on January 10, 2017. Cole was an inspiration to many of the fashion students, faculty, and staff that have worked with her since the early 1980s. The mentorship program allows for students to create pieces under the guidance of industry icons, learning different styles and markets, and getting feedback directly from designers. The Anne Cole Collection had several different mentor projects from 1986 through 2015.

Cole was also a mainstay at the Annual Scholarship Benefit and Fashion Show, where the mentor projects are featured each year. She was honored with the Creative Vision Award at the event in 2001 and 1993 for her contributions to fashion design.

"She was the most generous person," said Jill Hilgashi Zeleznik, interim chair of the fashion department at Otis College of Art and Design. "She had a great sense of humor, was always giving of her time, and the students loved her. We're going to miss her tremendously."

Cole's dedication to the students extended into their careers, said Zeleznik. She hired many of them including designer Rod Beattie ('86 Fashion Design) of Bleu/Rod Beattie. Beattie has in turn mentored in the fashion design program over ten times, guiding the next generation of California swimwear designers.

“Anne was the poster child for sophisticated swimwear,” said Rosemary Brantley, the founding chair of the fashion design department at Otis College, to Apparel News. “I remember the first year we worked with her, she wanted all of the suits to be in brown, which was a color nobody made in swimwear.”

In lieu of flowers, it was asked that memorial donations be made to the Otis College Fashion Design Scholarship Fund, please note that your gift is in memory of Anne Cole.