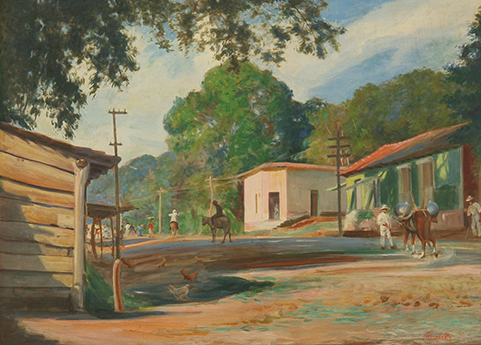 Salvadoran Art, A Chronology of the History of the Visual Arts of El Salvador (1821-2015) by Jorge Palomo (BFA '99 and MFA '01) is an epic achievement. Serving as both an educational tool showcasing the art of El Salvador, as well as a reference for future research, the book which runs over 800 pages is presented in three volumes and is divided into two main parts. Palomo donated one set of the three volumes to Otis College's Millard Sheets Library, where it is available for viewing. (Listen to author Jorge Palomo discuss the project below.)

The first part is a detailed chronology about the visual arts in El Salvador since its Independence to the present, including summaries per decade. The information has been confirmed with over 5,500 primary sources of information (invitations, catalogs, diplomas, press clippings, the Diario Oficial (the official government newspaper), etc.) and secondary sources (books and magazines). The parameters included in the chronology include the type of information that is usually detailed in artists’ resumes, such as dates of birth and death, information about their artistic education, migrations, public and private sector jobs, solo shows, group shows, awards, inclusions in important collections, international auctions; achievements within other artistic braches like architecture, illustration or stage design; and a few important quotes that explain a particular period. Other types of information included are related to the institutions related to the visual arts such as Academies, Ministries, Secretariats, Museums and Galleries, as well as their most important officials, national competitions, national awards, public commissions, buildings of the national heritage and world fairs.

The second part includes approximately 600 photographs of works of art, also in chronological order, from the country’s most important public and private collections (national and foreign museums, governmental entities), monuments, commissions, awards from competitions and auctions, as well as new artworks discovered by the investigation. The books can be downloaded for free from https://www.marte.org.sv/catalogo-interactivo/

Author Jorge Palomo is an independent curator and artist who holds a BFA and MFA in Fine Arts from the Otis College of Art and Design, in addition to a BA in Marketing and Management from the University of Pennsylvania. He has also been a juror for different national and regional art contests and auctions, as well as a docent of Salvadoran, world, modern and contemporary art in different institutions. He was the Programming Director at the Art Museum of El Salvador (MARTE) between 2004 and 2006, and the Trade and Cultural Attaché of El Salvador’s Embassy in Washington, D. C. between 1993 and 1995. Among his most important exhibits he has curated are: ReVisions, Encounters with Salvadoran Art (the semi permanent exhibition of national art at MARTE between 2007 and 2011); Interventions (contemporary art at MARTE between 2004 and 2006); Noé Canjura, Son of Light (MARTE and Forma Museum, 2011); Dialogs between the past and the present, Sculpture for the Bicentennial (National Exposition Hall “Salarrué”, 2011); and the retrospectives of the National Cultural Prizes of 2007 and 2012, Enrique Salaverría and Carlos Cañas respectively (both at the National Exposition Hall “Salarrué””). He has also curated retrospectives for artists such as Valero Lecha, Nicole Schwartz, Titi Escalante, Negra Alvarez, and Licry Bicard.