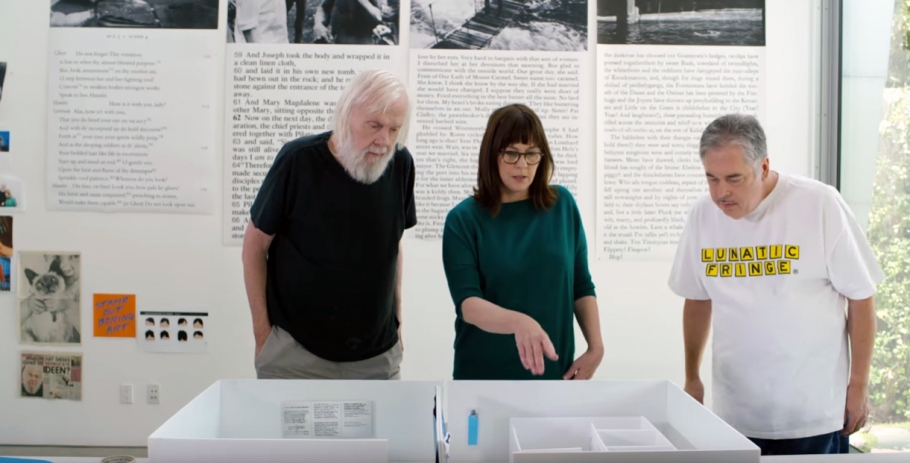 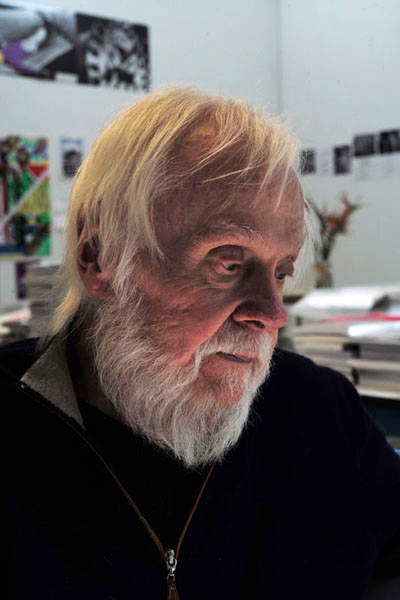 Otis College of Art and Design mourns the death of our fellow artist and dear friend, John Baldessari, who died January 2, 2020 at his home in Venice, CA. He was 88.

One of the most prolific and influential artists in the world, John has had over 300 solo exhibitions, and was included in over 1,000 group exhibitions. In 2014, President Barack Obama awarded John the National Medal of Arts Award. He received the Golden Lion for Lifetime Achievement, awarded by La Biennale di Venezia, in 2008, and became a member of the American Academy of Arts and Letters and the American Academy of Arts and Sciences in 2016. John Baldessari Catalogue Raisonné, Volume Five: 2005-2010 was published by Yale University Press. Volume Six: 2011-2019 is forthcoming this year. He has received honorary degrees from the National University of Ireland, San Diego State University, and the then-named Otis Art Institute of Parsons School of Design.

John had a special affection for Otis College of Art and Design. He studied at Otis (then called Otis Institute) from 1957 to 1959, and was proud that so many of his former students went on to become faculty members and build programs at the school. The very long list of former Baldessari students who taught in Otis’s Fine Arts program includes Mike Kelley, Christopher Williams, Steven Prina, Dana Duff, Dorit Cypis, Cindy Bernard, and founding Chair of Graduate Fine Arts, Roy Dowell. Current faculty members who studied with Baldessari include Judie Bamber, Larry Johnson, Nicolas Kersulis, and Otis alumna Liz Craft (’94).

John was also profoundly thankful for, and endlessly impressed by, the many Otis alumni who worked in his studio over the years, including Rashell George (’05), Fay Ray (’02), Tracey Powell (’02), lo Olivera (’05) and Emmanuelle Castellan Hormaeche (’17). John often told me that he credited his ability to produce at the remarkable pace required of him thanks to alumna Brienne Arrington (’02), who has served as head of production in the Baldessari studio for 17 years. He had great respect and admiration for Amanda McGough (’08), who joined his studio as Production Manager in 2010. Amanda was also Editorial Coordinator for the publication of Baldessari’s collected writing, More Than You Wanted to Know About John Baldessari, which I co-edited with Hans Ulrich Obrist.

Though John and I vowed off curating every year, we co-curated many shows, including 100 Artists See God and, more recently, This Brush for Hire: Norm Laich and Many Other Artists. We appreciated the Otis students and alumni who often helped us with those shows, especially Rhiannon Aarons (’04).

John loved efficiency and hated pretty much any task that took time away from art-making. For that reason, he appreciated that he rarely had to put any effort into finding excellent studio employees. He knew he could call me and ask if any A+ Otis students needed a gig. Though John was a gentle and generous person, working for him in his studio was no joke. He held himself to an unbelievably strict work ethic. If you wanted to stay on, you had to be like him—talented, capable, smart, direct, resourceful, hard-working, witty, and always on time. Because of their excellent education, Otis alums could work quickly to the Baldessari standard. That continually amazed him and filled me with pride.

Like many artists of his generation, John, for much of his life, could not depend on well-funded art galleries, or really anyone, to pay attention and keep a decent archive of his work. So, from the very start, he operated on the principle that an artist must be their own and best historian. “Warts and all,” as John would say. He kept records of his works, his working materials, and his writing in cardboard boxes he’d pick up from the trash at Star Liquor across the street from his longtime Main Street studio in Santa Monica. It was a beautiful, simple system.

Among those records were John’s notes from Herb Jepson’s experimental drawing class that he took at Otis in 1957. Quoting Jepson, 26-year-old Baldessari made a note to himself: “Be alert to new experience—don’t react in a conditioned way. Rocking chair gestures: Pavlov.”

Among the same pages, he wrote, “Look at all ears and eyes. Are they the same?” Fifty years later, that observation became the work Noses & Ears, Etc. John knew the value of a good idea and never wasted one. He loved to sit on the porch of his Santa Monica house, smoke cigars, and observe the world, but I don’t believe he ever had a rocking chair.

Meg Cranston is the chair of the Fine Arts Department at Otis College of Art and Design.