Los Angeles Times: How guerrilla art on the streets of South L.A. confronts scars from the 1992 riots | Otis College of Art and Design
Skip to main content

Los Angeles Times: How guerrilla art on the streets of South L.A. confronts scars from the 1992 riots 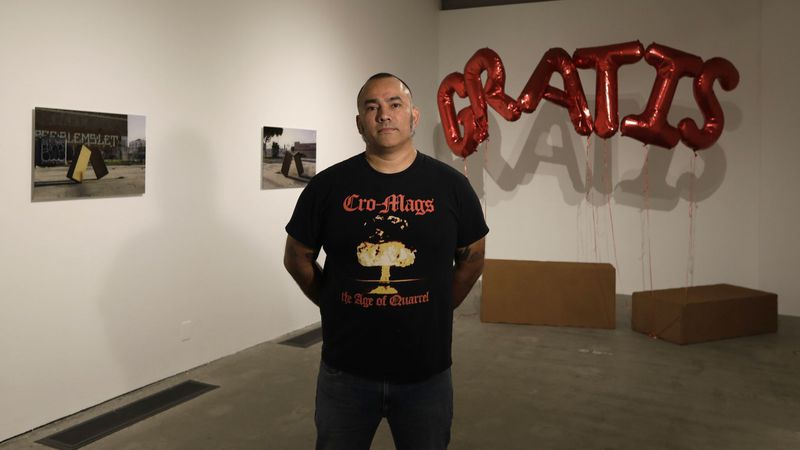 Artist Juan Capistrán was a teenager on an afternoon bus ride from Venice to his home in South Los Angeles when the 1992 riots began. Even though Capistrán noticed passengers were increasingly upset the further east and south his bus traveled, it wasn’t until he was nearly home that he learned a jury had acquitted four police officers in the beating of Rodney King.

Within an hour of arriving home, the house next door was broken into and the liquor store in his neighborhood was burned and looted. During the next week, more than 60 people died and more than 2,000 were injured amid looting and fires. Now 42, Capistrán calls the riots a defining moment in his life, lifting the veil on the pervasive inequality around him and shaping his art.

“I knew where I lived, I knew the history and all the violence around me,” he said. “But it wasn’t until that moment that I realized this is [expletive] up, what’s been happening and what I’ve been living through.”

The aftermath of the riots is the subject of Capistrán’s project “Psychogeography of Rage,” on view at the Los Angeles Municipal Art Gallery. It’s part of an exhibition showcasing winners of the 2019 City of Los Angeles Individual Artist Fellowships, a $10,000 grant awarded by the Department of Cultural Affairs to local mid-career artists. This year the city selected 14 fellows in design and visual arts, literary arts and performing arts.