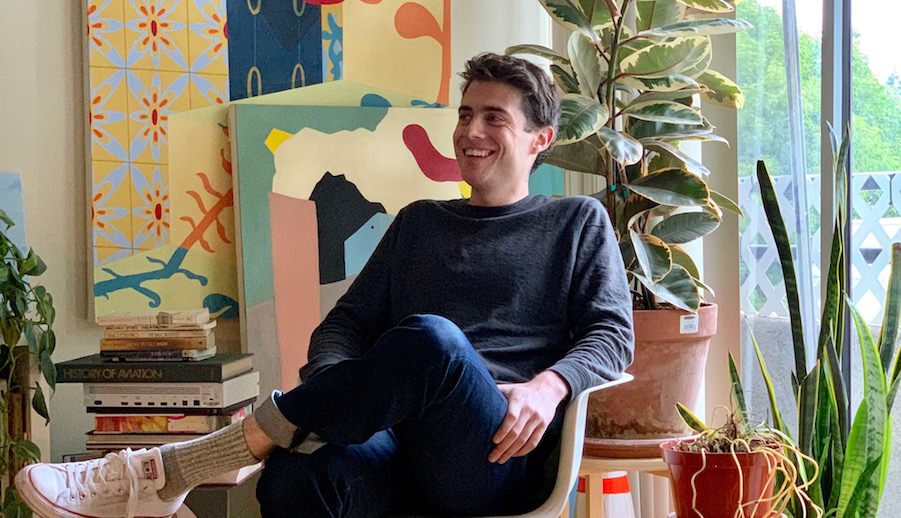 Right up to the moment he clicked “Submit,” Charlie Kendall (Communication Arts ’18) wasn’t sure of his contest entry. He had tinkered with his illustration for months, then started drawing new material at the last minute in the days leading up to his January 1, 2019 deadline. “I tried not to, but I was so unsure of it,” he says now. Then, many weeks passed. So many that when Andrew Heard, Manager of Art for Pabst Blue Ribbon Beer, called him in February, Kendall was confused. “I was like, ‘What the hell are you calling me for?’” 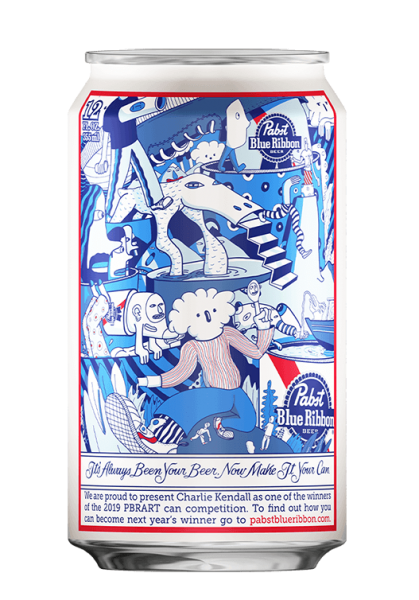 Turns out, Kendall had won the Pabst Blue Ribbon Art Can Contest, beating out thousands of applicants. His winning illustration is now printed on millions of cans of the iconic beer that currently are available in bars, markets, and liquor stores throughout the country (the rollout ends this month).

Kendall’s work features cylindrical shapes and fantastical characters in a dreamscape that bears little resemblance to the beer company’s staid, 100+-year-old blue ribbon logo. This, of course, was by his design, but it wasn’t without some risk. “I had put all the [Pabst] branding off to the side and tucked it into the drawing,” he says. “I didn’t really think about it until submitting [my work], and then I was like, ‘Oh, darn, I don’t know how that’s going to go.’ But I just did it anyway.” It was the first time since the contest’s 2014 inception that Pabst gave the top prize to a submission in which its logo is off-center.

“In retrospect, I realize I didn’t really look at whether there were too many rules,” Kendall says of the Art Can contest. “I set my own parameters, because the overall idea was that it’s not about the beer. It’s really about the culture and the celebration around beer, and what beer is usually paired with. It’s really about the people around you, and the things you’re interacting with.” 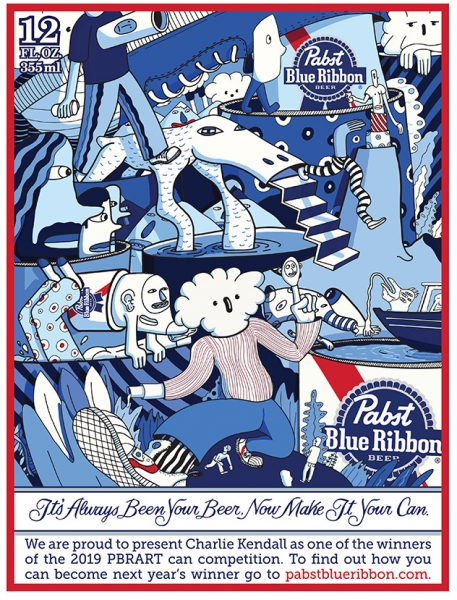 The main connection Kendall made with the Pabst brand was using the logo colors as a jumping off point, even though he tweaked and desaturated them. “I was O.K. if I lost,” he says. “I thought, ‘I might as well just push it and get a drawing that I really want, because if I could do that, then it made the work stronger.” Sticking to one’s guns even through self-doubt is a continual process for any artist, and for Kendall it allowed him to world-build in a way that is more typically his style. “I like to make things a little more poetic and metaphorical [than the Pabst work], and make it a little bit cheeky,” he says. “I was thinking about less conceptual things and more just building a world for this one, or invoking some feeling. I do a lot of writing to inform the pieces I make at home, and this one was really just about the energy.” 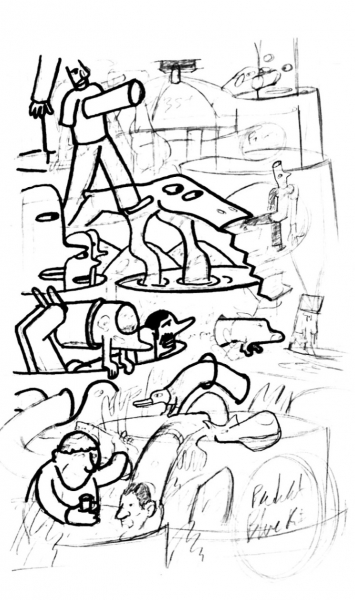 Kendall’s illustration centers around a “cloud koala” character who is drinking beer and celebrating with his friends—“the camaraderie around it,” he says. “The psychedelia of the characters is to really push that world-building aspect and send it to a different place…. I was thinking a lot about the brewing process. At a bar there’s all these taps and tubes and pipes and bottles. It’s a really cylindrical world that I felt I should emulate in some way. It’s not as blatant as putting a beer can [in the illustration], but I felt like it was enough to hint at it.”

Kendall’s surrealism, and trying to figure out what was going on in his illustration, is what PBR Manager of Art Andrew Heard zeroed in on after whittling the contest submissions down to the top 50 contenders. “Charlie’s blazing his own trail, and his art is very unique and very fresh,” Heard has said. “Even if it weren’t on a Pabst Blue Ribbon can, I’d recognize his style.” 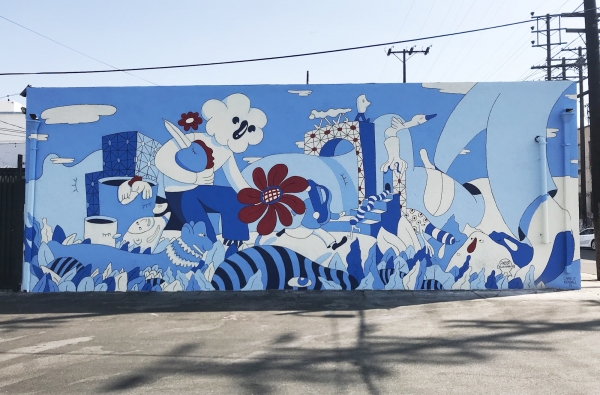 The brand has continued to work with Kendall even after the contest announcement, offering him an opportunity to paint a mural on its Chinatown gallery space and create an animation based on his illustration. “These were opportunities I wouldn’t otherwise get,” Kendall says. “It allowed me to stretch my creative skills and really test them out. Working with an animator and an agency, communicating back and forth, and learning the language of animation was really cool. The mural was another milestone in testing my ability and what I think I’m capable of, versus what I’m actually capable of.”

The experience has been the best confidence booster. “These are really rigorous projects, and they require a lot of attention and focus,” Kendall says. “If this brand can trust me to do these things, that must mean other brands would trust me. Now I have a little more confidence to approach other situations, and other brands, and other companies, and other projects. To keep pushing that forward.”

Also not lost on Kendall is the impact his work has on the public. “I’ve gotten a ton of photos [from people] and people are reacting to [the can] really well,” he says. “That’s always really nice to see, especially because oftentimes you’re working behind a computer all the time, and you’re drawing these things that are not entering the real world. They stay in your sketchbook, or stay in pieces in a drawer. To see [my work] in real life, and see people interact with it is really cool.”

The Pabst Blue Ribbon Can Art contest currently is taking 2020 submissions, which are due January 1. To find out more, click here.

To hear more about Kendall’s time as a student at Otis College, play the video below.

Sketch and portrait courtesy of Charlie Kendall. Can and illustration courtesy of Pabst Blue Ribbon. Video by Fawad Assadullah.