After finishing her degree at Otis, Lilit Pilikian (’09 BFA Product Design) used the tools she learned in college to pursue a career designing for corporations and, eventually, producing her first documentary film, 100 Years from Home, which was directed by her husband, Jared White. Born in Los Angeles, Pilikian traces her family history back to Armenia, and a search of her great-grandparents’ house there, which is documented in the film. Through her journey and in the film, she explores the history of the Armenian Genocide and its present-day effects on her family and community. On the eve of the documentary’s PBS SoCal premiere, Pilikian shares what wasn’t caught on film and how to preserve priceless intergenerational stories. 100 Years from Home aired on Tuesday, September 1 at 8:30 p.m. PTD. (Viewers outside of Southern California can request the documentary to be shown at their local PBS stations). Follow the film on social media to get up-to-date information on future screenings of the film.

Having studied Product Design at Otis College, what was your journey to becoming a filmmaker?

I remember spending my whole life unable to answer the question, “What do you want to do when you grow up?” It wasn’t until I came to visit Otis and saw the Product Design department with my own eyes that I knew it was for me. I’ve always been a creative problem solver, and this allowed me to actualize that. The Product Design department helped me put these ideas into practice and communicate them to an audience in a way that is clear, understandable, and gets people on board. I see that the process is the same no matter if the product is digital, electronic, a toy for kids, an experience, or a film. It’s [having] the tools for a pioneering mindset.

I’m all about looking for new ways to solve a problem. So, when the centennial of the Armenian Genocide was approaching, I felt compelled to do something to get this largely unheard story told. Being married to a filmmaker made this particular idea not as crazy as some of my others. But my husband had primarily worked on scripted projects before embarking on this documentary, so there was a learning curve and we picked up a lot in the process.

The direction of the film changed a few times in the process of making it. We had to be flexible and quick to pivot where the story guided us. We were also very resourceful and scrappy, making things work with a very small team.

My husband and I watched many Oscar-nominated documentaries to get inspiration, and studied the techniques they used. My husband did most of the historical research. My research consisted of looking for my great-grandparents’ house using Google Maps and a century-old blueprint.

Was there anything that you wish you could have captured on film, but were not able to?

I wish we could have better captured the rain on the 100th anniversary of the Armenian Genocide [on April 24, 2015] while we were in Armenia. There is a saying that it always rains in Armenia on Remembrance Day. But it was so sunny that morning, we couldn’t believe it. Then, as soon as the [genocide memorial] was in our sights, it started pouring hard, the chilliest rain I’ve ever felt. After we paid our respects, we were funneled down to the bottom of the hill where I could no longer see because my glasses had fogged up completely. Very difficult to film, even more difficult to fly a drone that day. But my husband miraculously managed to do both those things. Having the drone allowed us to capture the crowd marching up to the genocide memorial, as well as so many beautiful vistas that give a taste of the scale and grandeur of many of the locations we visited.

Were there any logistical challenges in creating this film?

So many logistical challenges, if we knew what it would take to go into this we may never have done this! But that’s the beauty of just taking the project one step, one challenge, at a time.

We first ran a Kickstarter in 2015 to get the seed money for equipment: lights, camera, audio. You can imagine we had to keep things light enough to travel, but we did not want to sacrifice quality either. It was me and my husband carrying heavy equipment upstairs, down tight ladders, across open fields.

Naturally I was hesitant to go into Turkey where the hatred of Armenians is still very common today, and where the genocide is still denied, and where criticism of the government is an imprisonable offense. I was so uneasy after crossing the border, I refused to touch any of the film equipment. All of that ended up on my husband’s shoulders, quite literally. When going through security at the border, the guard there pulled the drone out of my husband’s bag and asked him what it was. My husband said, “It’s a camera.” The guard gave him a funny look, but thankfully accepted the answer. They let my husband through after that.

On the other hand, when going through customs, I was stopped. They asked me about a region the two of us had both recently visited, Artsakh/Nagorno-Karabakh. It’s a contested region that was historically Armenian and later became part of Azerbaijan during the Soviet era. Armenians and Azerbaijan have been fighting over it since the fall of the Soviet Union, and it’s currently controlled by Armenians, but not internationally recognized. Now mind you, my husband had the exact same visa stamp in his passport, but they never even paid him any mind. His last name is White. “OK, next.” After holding me for around a half hour, they finally let me go on through.

For the most part, I was comfortable being shuttled around in my group with our experienced tour guide who spoke the local language. But while we were rogue wandering the streets of Kars [in Turkey], and it started to get dark, I realized I didn’t see many, if any, women out. This only made me that much more uncomfortable. 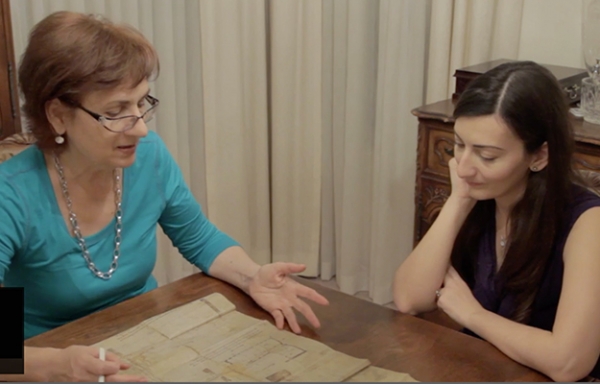 How was the blueprint to your great-grandparents’ house kept safe for so many years?

My great-grandparents fled [Turkey] by joining the Russian military caravan. They moved a lot of people out of Kars when the region came under control of the Ottoman Empire. Later, the family moved to what was left of Armenia with their only remaining son and daughter. Their son married my grandmother, who later ended up bringing the blueprint with her to America. When my grandmother passed, she gave the blueprint to my mother, who later gave it to me. Oh, I’m not telling where the original document is, but glimpses of it are all over the documentary.

Growing up in diverse Los Angeles with a large Armenian population, what was your perception of how the Armenian community interacted with greater Los Angeles or American culture?

There’s a huge community of Armenians here in L.A., especially in Glendale. I’ve always felt like I live a double life. I spent a number of years jumping in and out of Armenian private schools and American public schools. I’ve always felt like a bit of an outsider, like Toula from My Big Fat Greek Wedding. My husband is actually a non-Armenian, but in some ways he has a better understanding of the culture than I do.

In a lot of ways, the Armenians here are very acclimated to L.A. and have an appreciation and love for the American way of life. But in other ways, there seems to be an underlying intergenerational trauma and fear that still lingers. Many Armenians have to have two or even three refrigerators full of food just in case of famine, and a need to keep your family close just in case you will be uprooted.

Armenians have such a rich history of being pioneers or being the center of the ancient world at the heart of the silk road. New materials, innovations, and ideas would pass through there first. But these last 100 years, most effort has gone into preservation, conservation, and this ongoing fight for truth and justice. I hope in the next 100 years Armenians will be able to focus more on building and leading the future.

Do you have advice for other American-born children of immigrants that may want to trace their history?

Start those difficult conversations with your family members and record them. We have so much technology at our fingertips. You could do an audio or video recording with a smartphone or laptop. Have questions ready. Just search for oral history questions online, there are so many great ideas. There’s a resource USC just put together that can easily be adapted to learn more about any immigrant family’s past. In my family, the oral history was passed on in small fragments here and there, until my husband and I sat my parents down in front of a camera and made them start at the beginning.

If someone could take away one thing from watching your film, what would you want that to be?

My story is not all that unique. It’s the story of many Armenian people, but even more than that it is the story of countless immigrant families, forced to leave home in search of a better life.