“The drawing is busy and packed and allows your eye to travel,” says Kendall (’18 BFA Communication Arts, Illustration) of his poster.
Anna Raya

An abridged version of this profile appears in the 2021-2022 Admissions Viewbook. To request a Viewbook, please click here.

Charlie Kendall’s path to Otis College was a little circuitous. “Architecture, programming, and biology were the subjects I was studying before art school,” says the Baltimore, Maryland native. “Funnily enough, I make paintings and drawings thinking about all of those things.”

It’s no surprise, then, that world-building defines a lot of his work, which often features fantastical characters ensconced in dream-like, spectacular surroundings. There’s no way to take in one of Kendall’s illustrations, paintings, or murals in a few seconds. They require close observation on repeat viewings. 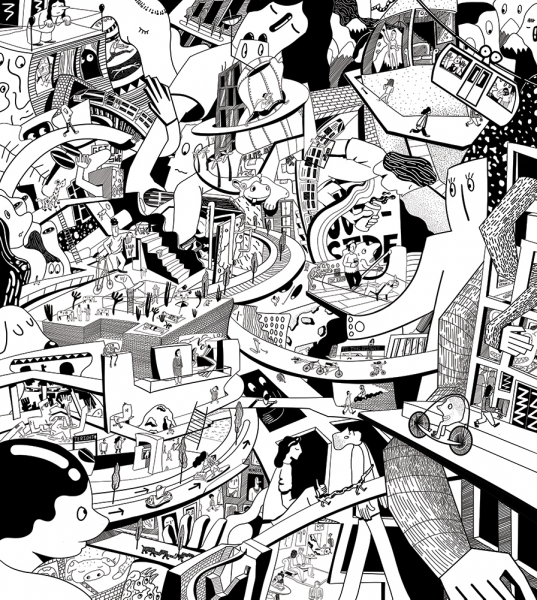 The illustration that was used for this year’s Admissions Viewbook poster, Alternative Transportation, is a prime example of this. For the work—which Kendall created while he was still a student at Otis and was featured as part of the LAX Selfie Wall Project, done in collaboration with the Los Angeles International Airport, including new selfie walls that went up this fall—he was thinking about L.A., city development, and transportation. “The drawing is busy and packed and allows your eye to travel,” he says. “From afar it can look like grain or a texture, until you move closer and it progressively reveals the details of the work. It’s a snapshot of a bustling city. I like that the viewer can sit with it and pick where they want to go within it. Micro or macro.”

Kendall’s detailed, larger-than-life style also can be seen on office walls in Maryland, the entrance to a new coffee shop in Los Angeles, and even a mural on Pabst Blue Ribbon’s Chinatown gallery, 1700Naud (Kendall won the beer maker’s 2019 Art Can Contest). He has created branding, imagery, and even gifs for health products, voting social media campaigns, and wallpaper. Nothing is off limits for the artist, who’s been working as a graphic designer and illustrator in Los Angeles since graduating from Otis in 2018, often collaborating with fellow Otis alumnx. He also shows his more personal work in gallery group shows.

Kendall originally thought he’d major in Product Design before switching to Communication Arts. He found that taking classes in other programs was instrumental in learning the languages of other fields of art and design. “Otis created an environment to meet and cultivate friendships that I still have and cherish,” he says. “The rigorous coursework was one thing, but learning to talk and communicate my ideas has been the most valuable.”

The imagery in Kendall’s work has evolved since Otis, of course, and now he says “motion, time, light, and the built environment are themes I look to when developing work. I used to have specific ideas to make an image, but that wasn’t enough to keep making work. Recently, it’s been more about focusing on ‘the why’ and what the mission is.”

To any prospective student, Kendall advises taking classes in other academic programs at Otis, not only for the access to different making materials, but also for spending time with other students and instructors. “And get your business chops up,” he says. “Art and business work hand in hand.”

Main image, from left: Photo of Kendall by Josh Manalang; Alternative Transportation and Meeting both by Charlie Kendall, provided courtesy of the artist.