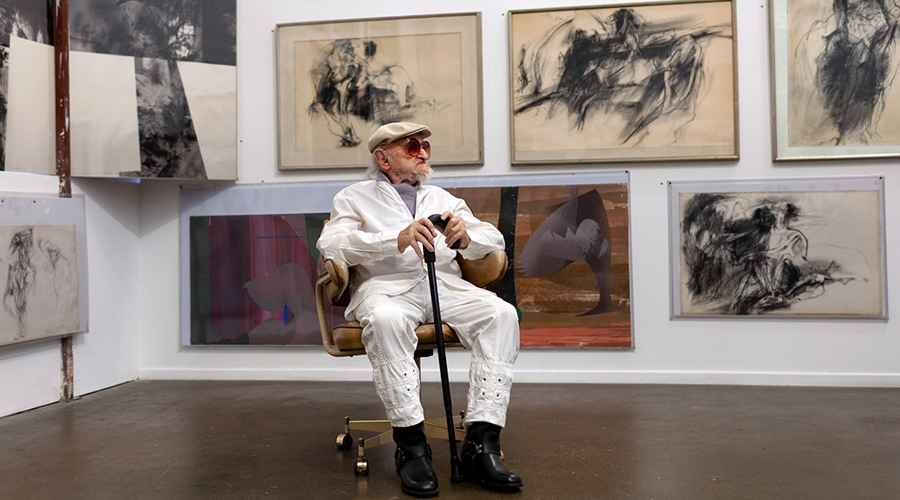 Retro/Introspective by LAST Projects at Tin Flats Gallery has been extended through March 19.
Anna Raya

Imagine riding the Los Angeles Metro to a political rally downtown and spotting a diminutive, eldery man wearing a placard of Pablo Picasso’s Guernica around his neck. You both get off at the same stop, and start walking towards the same rally.

This is how gallery owner and curator Ilona Berger first encountered Ernest Rosenthal (’55 Fine Arts)—Holocaust refugee, World War II veteran, artist, one-time Otis student (in the 1950s, when it was known as the Otis Art Institute), art instructor, poet, and peace activist. It was 2014 and they met at a Palestinian solidarity rally during the Gaza War. He was 95 at the time. “I don’t remember what we talked about, but we exchanged numbers and I traveled back with him on the Metro to Santa Monica and Vermont and he insisted on giving me a ride back to West Hollywood,” Berger says. “I told him that I ran a gallery and he told me he was an artist and had recently published a book of poetry. Not long after, I visited his home, studio, and sprawling hillside garden in Laurel Canyon and Ernest showed me some prints and around his studio.”

Berger says it took a while to understand and appreciate the breadth of Rosenthal’s work, but after years of friendship, and absorbing the paintings and drawings on the walls during several visits to his home, she is hosting Retro/Introspective at her gallery, LAST Projects, that is showing at Tin Flats Gallery in the Frogtown neighborhood of L.A. (the scale of his show was too big for her space). In the show are over seven decades of Rosenthal’s paintings, sculptures, and drawings—250 works in all—that the artist helped oversee during installation with technical help from fellow artist and Otis alumnx Tom Field (’77 MFA Fine Arts) and Beatriz Johnson. After an initial first run, the exhibition has been extended through Saturday, March 19. 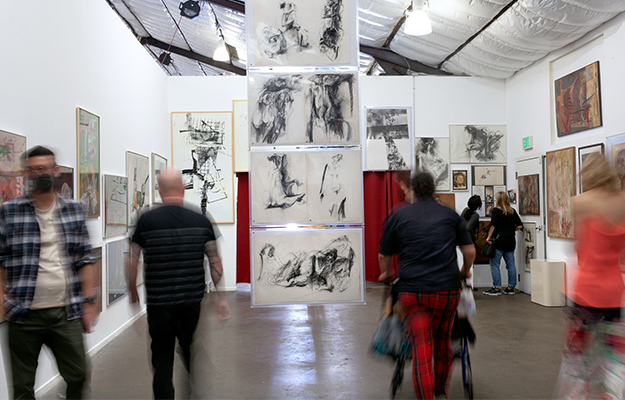 Berger had shown Rosenthal’s work before, in a two-person exhibition in 2020 with another Otis College alumnx, Karim Shuquem (’18 MFA Fine Arts) to mark Rosenthal’s 100th birthday. “The show went really well from our perspective, and the work, mostly figure drawings and his self-titled  ‘seragram’ or screen-printed monoprints, really resonated with our audience and community of artists who bought quite a few of the works,” Berger says. Plans for a salon-style solo show were put on hold due to the COVID-19 pandemic, after which time Rosenthal archived his work and put up a website with Field’s help.

Two years later, Berger and Rosenthal have been able to collaborate on Retro/Introspective, which opened on January 23. “Ernest’s work is a tour de force of 20th century European, Abstract Expressionist experiments in minimalism and space and light, and an intimate autobiographical fusion and remixing of it all in his last prints. It’s absolutely extraordinary,” she says. “So many people have come through the show, from fans of mid-century art and Abstract Expressionism—who recognize Ernest’s influences—to people who don’t have a deep knowledge of art history and yet respond to the beauty and power of the work as well as Ernest’s story. I’ve never sold art to people who walk in off the street until this show. That we have prints and drawings starting at $250 makes the work accessible to people.”

While Rosenthal himself jokes that he “has one foot in the grave and another on a banana peel,” he had the ambition and vigor to direct the installation and design his expansive show himself, choosing the placement of every piece and even designing how a series of prints and drawings hang from Tin Flat’s sky-high ceiling in five columns, a display that Berger describes as “architectural.”

“I hope that through this exhibition Ernest starts getting his due,” she says. “I know that he’s concerned with his archive and legacy, so I hope that he gets a higher-profile gallery show and museum opportunities in his lifetime.” 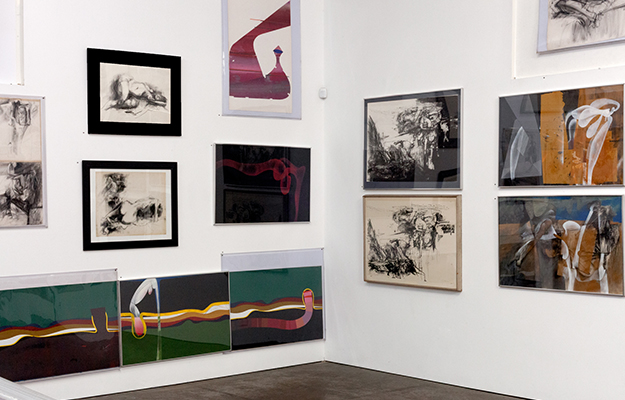 You can visit Retro/Introspective through Saturday, March 19 at Tin Flats Gallery at 1989 Blake Avenue, Los Angeles, CA 90031. More information is at lastprojects.org.

LAST Project’s bio of Ernest Rosenthal’s extraordinary life is below:

“Ernest Rosenthal was born in Vienna, Austria in 1920 into a middle-class, Jewish family, and started drawing and painting as a child. As a teenager, he hitchhiked to Paris and saw Picasso’s Guernica at the 1936 World’s Fair, which was a foundational experience. His life was upended in 1938 when the Nazis occupied Austria. Ernest was expelled from high school with the other Jewish students. After being summoned to meet the Gestapo, the family made a narrow escape to Brussels, Belgium. Ernest studied portrait sculpture at the art academy of Brussels for six months before the family was given refugee status in the United States.

Ernest has been a meticulous archivist of his own work, and kept a photo album with documentation of his 1930s sculptures, but his physical archive starts in 1940, when the family arrived in New York. The pastel and conte portrait drawings on view in this retrospective are from Ernest’s earliest years in Los Angeles from 1940-1943. Ernest was drafted into the army in 1943, and spent the bulk of the war on a U.S. base in Iceland, where he experimented with watercolor landscapes. In the immediate postwar period of 1945 through 1946 he was stationed in France, where he continued to draw and paint portraits while working as a French and German translator for the U.S. Army.

After his army service, Ernest met and married pioneering modern dancer, choreographer, and teacher Meryl Stritman, who danced with Charles Weidman. They met when she posed as an art model for life drawing classes held at Ernest’s sister’s house in Long Island. Selected portraits of Meryl rendered in painting, sculpture, and drawing throughout a period of 70 years are on view at the gallery. The couple moved to Los Angeles and settled in Laurel Canyon, where they bought land and built their house themselves in the late 1940s. Ernest was a protege of Swiss-American Abstract Expressionist artist Hans Burkhardt and was inspired by Burkhardt’s self-built house nearby in Laurel Canyon. In the early 1950s, Ernest studied painting and printmaking at La Esmeralda National School in Mexico City on the G.I. Bill, and his large-scale Abstract Expressionist oil paintings from that period are featured in the exhibition, as well as some etchings. Ernest developed his printmaking craft during this period and completed a series of larger-scale abstract oil paintings, with a color palette of rusts and ochres.

Upon his return to Los Angeles in 1960 Ernest was recruited by June Wayne to become a printmaker at Tamarind, where he made lithographs for Ani Albers, Rufino Tamaya, and Lee Mullican, among other artists, that are in museum collections worldwide. Ernest also exhibited with John Altoon and other seminal artists of the 1950s and 1960s. Ernest worked prolifically in the 1960s and 1970s and produced his central body of figurative drawings, abstract drawings, paintings, and prints.

Ernest was recruited from Tamarind to start the print-making program at Occidental College in the mid-1960s and began an academic career at Occidental, CSUN, and Cal State Dominguez Hills that lasted until his retirement in the 1980s. His expansive terraced garden, with its hundreds of cement-filled hubcap steps, sculptures, and found object assemblages in Laurel Canyon was the site of many art happenings and was a gathering place for his students and cohorts from the Canyon. From the mid-1980s until very recently, it was the locus point of his creative practice, along with his polemical poetry and commited social justice and peace activism.

Ernest designed and curated his own retrospective and we are proud to host this important and overdue solo exhibition. He has selected 250 works from his archive for this exhibition. His book of poetry, Not For Drones, published in 2012, will be available in the gallery.”

All images photographed by Monica Nouwens/Otis College of Art and Design.