Otis College Honors the Legacy of Elaine Goldsmith, Who Was Instrumental in the College’s Expansion and Success | Otis College of Art and Design
Skip to main content

Otis College Honors the Legacy of Elaine Goldsmith, Who Was Instrumental in the College’s Expansion and Success

The College’s stalwart supporter recently passed away after a flourishing and philanthropic life helping the arts. 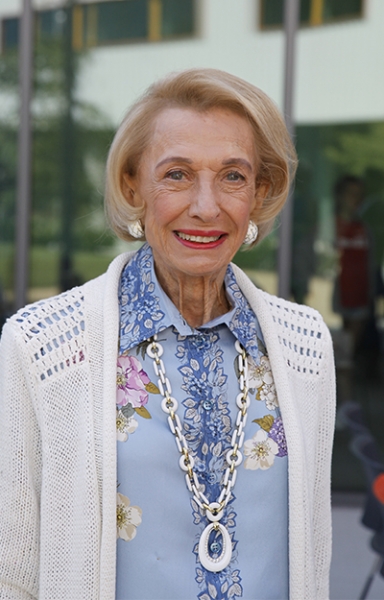 Generous, passionate, intelligent, service-minded, and always stylish, Elaine Maltz Goldsmith chaired the Otis College Board of Trustees from 1983 to 1998 and helped guide every major development of the College over the past four decades. Save the initial bequest by Harrison Gray Otis that provided the foundation for the then-named Otis Art Institute when it was founded in 1918, no other individual has had such an extraordinary and positive influence on the College and the artists and designers it has educated for more than a century.

Herself an accomplished sculptor, Elaine was first appointed to the College’s Board of Governors in 1973. Otis Art Institute of Los Angeles County, as it was then known, faced significant financial difficulties in 1978, when the County discontinued public support as a result of Proposition 13. Elaine went on to recruit other civic and business leaders to the Board and volunteer committees, and personally secured many of the gifts from the donors whose names appear on Otis College studios and classrooms today.

While Board chair in the 1990s, Elaine adroitly helped steward the newly private and independent College’s move from a county-owned space in MacArthur Park to the former IBM Aerospace headquarters building on Lincoln Boulevard in Westchester. She and her husband, Bram Goldsmith—who was Chairman of the Board of City National Bank, and passed away in 2016—were instrumental in purchasing what is now known as the Ahmanson Building for use by the College, and in their honor the new five-acre campus was named The Elaine and Bram Goldsmith Campus. From this relocation and expansion, an art and design college for the 21st century truly emerged and a sense of community was established.

The Ben Maltz Gallery within the Bronya and Andy Galef Fine Arts Center is named after Elaine’s father, Benjamin N. Maltz—the first Chairman of City National Bank—and recognizes the Goldsmith family’s generous support of the 2001 construction of the first purpose-built structure on the College’s new campus. More recently, Elaine’s generosity allowed Otis College to undertake a major, transformative campus expansion that began in 2012, when a new home for the Fashion Design program was contained in a new academic building (now named the Anne Cole Building) that also housed the Millard Sheets Library and the first residential and dining facilities in the College’s history. The dining hall is named Elaine’s in her honor, and the neon sign that greets guests to the dining hall was created from Elaine’s own signature.

A further testament to the Goldsmith family’s generosity and legacy is the Elaine and Bram Goldsmith Endowed Scholarship, which is awarded to BFA and MFA students annually.

The annual Fashion Show and Scholarship Benefit, now entering its 40th year, is another hallmark of Elaine’s impact at the College. As founding chair of the Benefit Committee, she helped create a signature Los Angeles event while raising much needed funding for student scholarships. From the original, scrappy fashion show at the Hard Rock Cafe to nearly three decades in the ballroom of the Beverly Hilton Hotel, and its more recent move to the Goldsmith Campus following a major campus expansion in 2016, the fashion show grew and evolved to engage generations of stalwart supporters and volunteers, high-profile mentors, and the creative talents of each cohort of Fashion Design students and faculty. In 2012, Elaine received the Otis Legacy Award with Rosemary Brantley, the founding chair of the Fashion Design program at Otis College; she also was honored at the 2019 Limitless Benefit Dinner. In 2018, the College named Elaine Chair Emerita of the Board of Trustees.

In addition to her involvement with Otis College, Elaine was active in a wide range of community and charitable organizations, including the United Jewish Fund and Cedars-Sinai Medical Center. She also was a long-term member of the Los Angeles Philharmonic Association and the Music Center’s Blue Ribbon.

“It is hard to think of Otis without Elaine’s physical presence, and her constant dedication and determination,” says Otis College President Charles Hirschhorn. “But in her spirit we will forge on and honor her legacy by continuing to educate a diverse community of students to shape the world.”

You can read the obituary for Elaine Goldsmith here.

Upon the news of Elaine’s death, the following testimonials have poured in:

“I am deeply saddened by the news of Elaine’s passing. For many years she was an inspiration to all those who knew her. I’m especially grateful for the warm friendship we enjoyed during the last years of her life. In our conversations, she always expressed love and support for Otis and its students, and affection for her many friends in the Otis Community. I will miss her greatly.” —Mei-Lee Ney, Chair, Board of Trustees

“Elaine’s love for and belief in Otis was profound and steadfast. Without her decades of unparalleled Board and philanthropic leadership, the vibrant and successful Otis of today would not exist. Elaine’s passionate efforts for the College and its students are inspiring and legendary. Personally, I will always remember and remain grateful for her grace, warmth, and kindness.” —Samuel (Sammy) Hoi, Otis College President, 2000-2014

“Elaine saw Otis through so many transitions, and she was dedicated to keeping the Otis name to honor the legacy of the alumni who came before. She had an instantly recognizable good heart and was enthusiastic about supporting students who would not be able to attend without scholarship. She did everything she possibly could to see that scholarships were available to help them pursue their dreams.” —Rosemary Brantley, Chair Emeritus, Fashion Design program

“Our beloved Elaine Goldsmith—she was kind, generous, and a legend in the Fashion Design program. For decades she impacted many students through her generosity, unrivaled fundraising, and commitment. Her contributions to our department’s visibility and the Fashion Show and Scholarship Benefits are legendary. Elaine made a difference to all of us at Otis College. She will never be forgotten and will live on in our hearts.” —Jill Zeleznik, Chair, Fashion Design program

“Elaine made it no secret that she wanted Otis out of MacArthur Park as soon as possible before someone was seriously injured [due to increasing crime in the area at the time]. In those days, Elaine was a popular figure. Just about everyone knew her. She visited the Ceramics program often and gave us a Cress kiln, which became the ‘beginner’s kiln.’ Elaine attended our senior shows, fashion shows, the Main Gallery, and the Bolsky Gallery shows. She knew us by first name, asking us to show her our new work. She often commented on how well we were progressing. Last fall, Elaine and I visited on the phone. When I mentioned that she saved lives by moving us to Westchester, she agreed and said, ‘And look at what happened. Otis is thriving.’ Elaine attended the opening of the campus expansion—which integrated the Fashion Design students with the entire Otis Community—and commented on the safety of the new on-campus housing, as well as how happy she was to hear we could eat a healthy dinner at Elaine’s for $7.00. When I shared with Elaine my concerns about the COVID-19 pandemic, she replied, ‘These things too shall pass.’ Today, I am sad that wonderful Elaine has passed.” —Joan Takayama-Ogawa, Otis College Faculty

“From the beginning and the very first Otis fashion show—on top of the tables at the Hard Rock Cafe—Elaine Goldsmith was there. At the forefront of every roadblock or issue, she was there. She cared innately about the school and the students. Her generous philanthropic efforts notwithstanding, she really ‘showed up,’ rolled up her sleeves, and pitched in. Nothing was too difficult. I was so fond of her. She will be vastly missed.” —Designer and Fashion Design mentor Bob Mackie

“Elaine Goldsmith’s impact on Otis College was immeasurable. She was larger than life—a lady of drive, style, and class. Elaine, together with Rosemary Brantley, made Otis Fashion a force that was recognized worldwide. An era has ended, but Elaine’s drive, force, and energy have helped lay the foundation for future generations of artists and designers to leave Otis College and have an impact on the world!” —Fashion designer and Fashion Design mentor Rod Beattie (’86 BFA Fashion Design)

“Elaine came to the defense of my work in 1991 when it was under threat of censorship and removal from an exhibition at Otis. I had received the honor of a juried award for painting, which came with an exhibition of the artwork. It was the first time a junior was given the opportunity. The senior class, led by a couple of trouble makers and a teacher who certainly egged them on, protested my work and its queer content and demanded it be removed from the exhibition. I was 22, and it was supposed to be a wonderful moment in my artistic and academic life. It was a nightmare made worse by the homophobia and bigotry on display. I was told that Elaine supported the work, and it basically had come down to her decision overriding those who did not support it. I have always been grateful for her standing up for the work, especially since I was a foreign student and my mother was flying in for the show. She would have been completely crestfallen if I had to explain why it was taken down. I do not know if Elaine knew how much it meant to me that she supported the paintings, the vision, and ideas of artists just starting out, but it made the entire ordeal bearable. Thank you, Elaine Goldsmith. Rest in peace.” —Jason McKechnie (’92 BFA)

Main image: Elaine Goldsmith at the “Topping Out” ceremony, during which the last beam of the new residential building was raised in 2015.