Otis College in the News, from Making Waves to It Gets Better | Otis College of Art and Design
Skip to main content

Otis College in the News, from Making Waves to It Gets Better 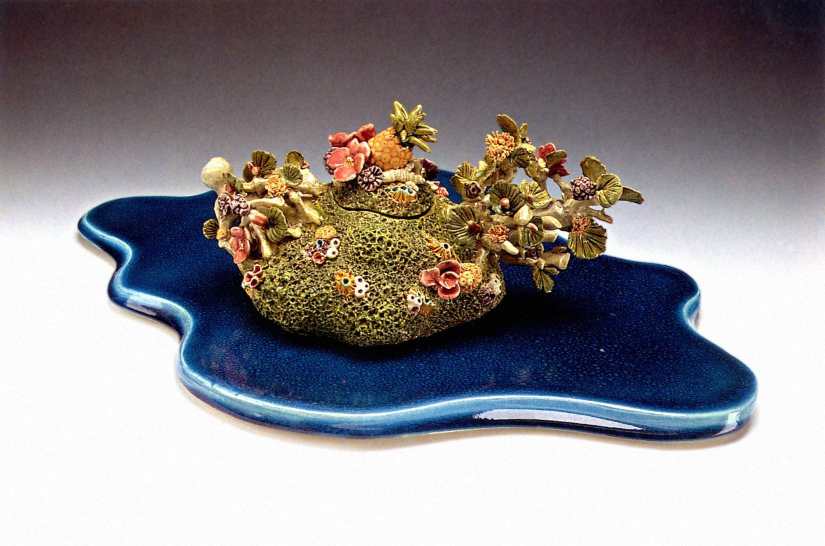 We could all use a little positivity right about now. Here are a handful of the uplifting feats being done by some in the Otis Community.
Anna Raya

The new year and the start of the Spring 2021 semester not only bring exciting opportunities for creativity, but also a chance to kick things off on a positive note with some good news from our community. Even as we were all enjoying a much-needed break over the winter holiday, many instructors, students, and alumnx were getting accolades for recent work and projects. Below is a list of just some of the recent news about the Otis Community, with links to read more.

Extension alumnx and instructor Joan Takayama-Ogawa (work pictured above) is featured in the new Craft in America exhibition, Making Waves: Ocean Ecology & Craft, which opened on Saturday, January 16 and will run through June 19, 2021. The show features work by artists who deal with various ecological and human-created oceanic problems across a spectrum of mediums. Craft in America credits Takayama-Ogawa with inspiring the show’s focus with her body of work of “intricately formed and carved earthenware totems about global warming and the impact on coral.” Craft in America also recently received the inaugural Excellence and Innovation prize of $100,000 by the Decorative Arts Trust. You can read more about the new show here, and view the virtual exhibition at this link. On February 5, 2021 from 11:00 a.m. to 12:00 p.m., Takayama-Ogawa will be delivering a talk on “Sculpting Climate Change,” which will cover her academic background in climate change, starting in 1973 at UCLA in the Geography Department, then in 1986 while attending Otis, and then making waves in clay by 1991.  More info here.

Creative Action instructor Robin Murez was written up in The Argonaut for a flying carousel in Venice’s Centennial Park that she has been working on, carving the animals that will fly around the carousel, which will be propelled by bicycle. Murez even traveled to Oregon to learn carving techniques from master carvers at the Albany Historic Carousel and Museum. When she first started, one animal took her eight months to carve; she now has the process down to eight weeks. In working with the City of Los Angeles Department of Recreation and Parks to expedite permits, Murez is hoping to install the carousel sometime in 2021. You can read more about Murez and her work on the carousel at this link.

Otis alumnx Alison Saar, Eduardo Sarabia, Gajin Fujita, and Kohshin Finley were included in the L.A. Louver’s 45 at 45 exhibition (which runs through January 30), with Fujita and Finley participating in an artist conversation on L.A. Futurism last week on January 13 that you can watch here, and Saar featured in highlighted content. You can view video and slideshow tours of the exhibition, and read more about the 45 artists featured, at this link.

The It Gets Better Project, a nonprofit organization that supports and celebrates lesbian, gay, bisexual, transgender, and queer youth around the globe, recently promoted new work by Otis students that was created for the Comic Heroes Creative Action course, which Candace Lavin helped launch in partnership with the organization in 2018. (Sadly, Lavin passed away last year.) In the course, students publish comic stories about LGBTQ+ characters. The It Gets Better Project’s blog and social media feeds recently shared the most recent student work that was created last fall. You can read the four new comics, as well as the ones created in previous semesters of Comic Heroes, here.

And, finally, the Otis Community is encouraged to check out Black Design in History, a series of BIPOC-centered design history courses that were facilitated by Polymode, the design studio founded by instructor Silas Munro. Classes cover the history of ancient African alphabets, infographics by W.E.B. DuBois, and the rise of hip hop’s graphic language, among other topics. A class on the typography of protest signs during the Civil Rights movement was offered for free in observance of Martin Luther King Jr. day on Monday, January 18. You can read about the course offerings and register to take any or all of them at this link.

This list of positive news is by no means exhaustive, so members of the Otis Community are encouraged to share what you’ve been up to by emailing us at communications@otis.edu.