The MFA Art + Social Practice emphasis at Otis College of Art and Design is hosting a new flag on campus. Part of Pledges of Allegiance, a nationwide public art project by Creative Time, a commisioned flag from photographer and mixed-media artist Vik Muniz is currently on view outside of the Bronya and Andy Galef Center for Fine Arts. Otis College is one of 19 cultural institutions and universities across 16 states to raise the flag.

Muniz’s Diaspora Cloud features a cloud floating against a blue background, evoking a geographically and temporally dispersed public that nevertheless share a similar viewpoint. The flag cleverly cites Clouds, his Creative Time project from 2001. In the public art project, clouds were “drawn” over the Manhattan skyline by a crop-dusting plane re-worked for skywriting. Muniz uses the sky as a metaphor for the ephemerality of connection within a community.

Each flag embodies art’s ability to channel political passion, providing a unifying symbol around which to unite, as well as a call-to-action for institutions nationwide to raise upcoming Pledges of Allegiance flags in solidarity with Creative Time. 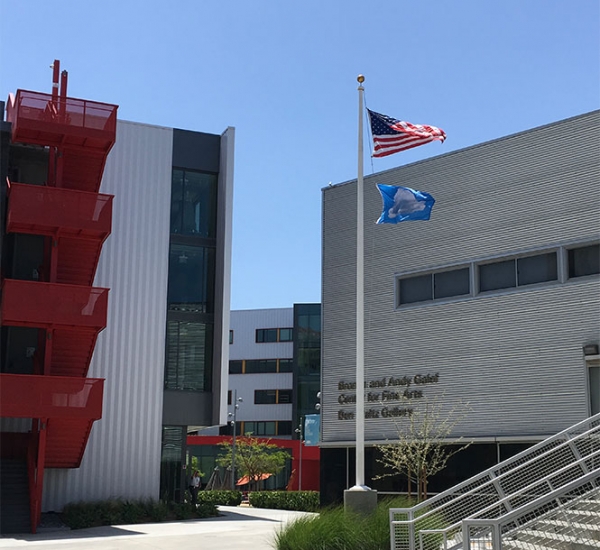 Muniz’s flag will be raised across the following 19 locations:

Pledges of Allegiance aims to inspire a sense of community among cultural institutions, beginning with an urgent articulation of the political demands of the moment. Each flag points to an issue the artist is passionate about or a cause they believe is worth fighting for and speaks to how we might move forward collectively as a country. To inaugurate the project, Creative Time raised Marilyn Minter’s RESIST FLAG on the roof of its headquarters on Flag Day, June 14. Pledges of Allegiance was originally conceived by Alix Browne and developed in collaboration with Cian Browne, Fabienne Stephan, and Opening Ceremony. Learn more.