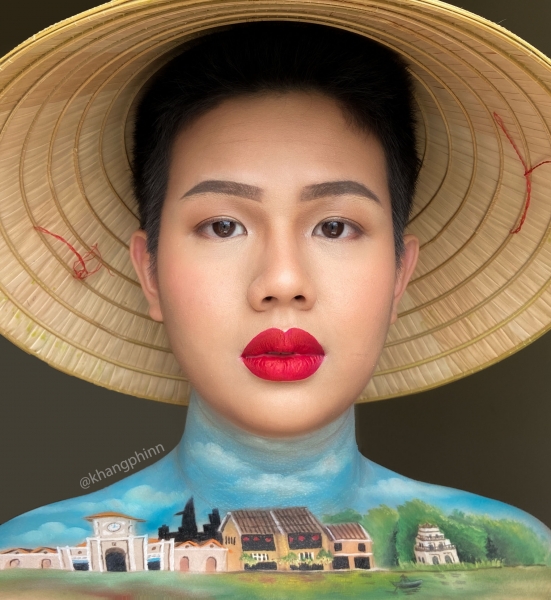 Many at Otis know Khang Nguyen (’21 Communication Arts) through his face- and body-painting art, which he shares on his Instagram account (@khangphinn) and has demonstrated during Halloween and other (pre-pandemic) campus events. His work includes fantastical trompe l’oeils and intricate character studies based on manga, fantasy, horror, and other genres. He transferred to Otis last year from DeAnza College near San Jose after visiting several art and design schools. “I liked Otis the most because it is small yet gave me such a welcoming feeling,” he says.

“Khang has a keen sense of color and composition, which is a key component of the poster,” Fleming says. “We really appreciated his ability to demonstrate his illustration skills and graphic design sensibilities through makeup, face paint, and mixed mediums. His work exhibits an exuberant edge, and a point of view that is in some ways still forming, but in other ways already feels very established.”

When Fleming approached Nguyen about collaborating on the Viewbook poster illustration, he admits he was surprised, but excited. “Since I first saw Daisy’s [2019-2020] poster design I had wished that I could do the same,” he says.

For the Communication Arts senior, making the jump from face-painting art to illustrating a poster that would be viewed by thousands of people presented an invaluable opportunity. His first thoughts were of origami, “because the poster is folded in an interesting form, with quite a complicated grid,” he says. Khang and Fleming worked through several iterations of his poster illustration—which at one point was designed to be arranged into a 3-D structure—presenting sketches to the Admissions team and making tweaks up through this summer. 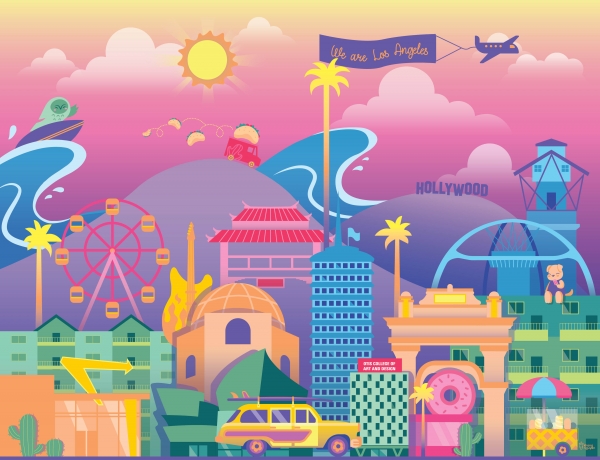 “We love how Khang’s illustration has an element of delight, with the cover being a small vignette of L.A. that unfolds to reveal an entire whimsical landscape,” says Fleming. “Khang’s command of color, soft gradients, and bold contrasts helps define and capture those West Coast sunsets that we all love so much as residents of Los Angeles. We hope that it will give others who aren’t here a glimpse of what they can hope to experience as Angelenos attending Otis College.”

Nguyen credits his parents with fostering his creativity from an early age—Pokemon played a key role—and acknowledges the influence of his native Vietnam on his work. “My culture is a huge and beautiful resource for me to bring to my art,” he says. “People usually only know about the art of Japan or China when talking about Asian art, but they barely know about the artistic beauty of Vietnam.” As for his plans post-Otis, Nguyen wants to incorporate his creative worlds into a business venture: “One of my goals is to establish a design agency with a focus on beauty and avant garde makeup.”

To request an Admissions Viewbook, please visit this link.