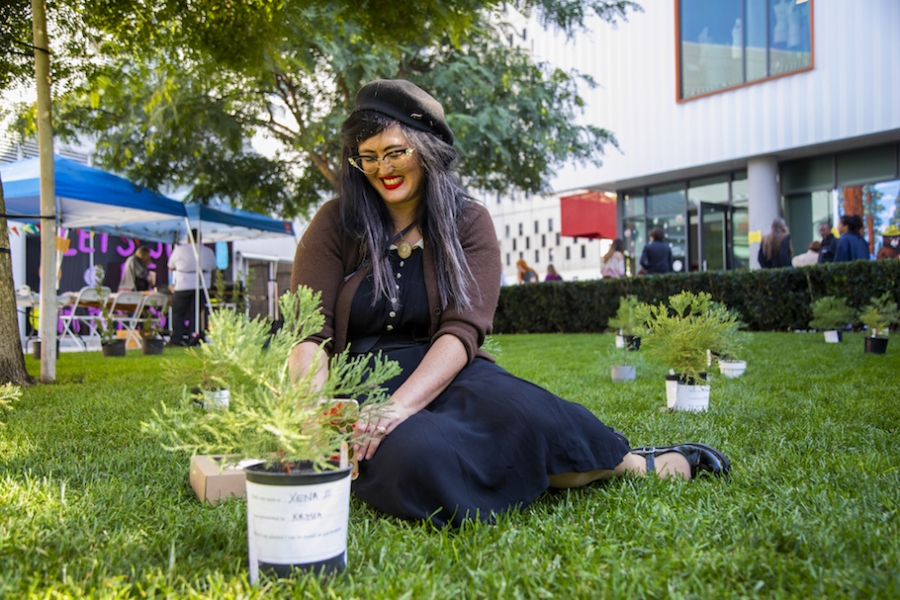 Shelley Forbes' 100 Giants tree-growing project culminates with send-off party for the seedlings and the students, faculty, and staff who helped grow them.
Anna Raya

Spread across The Commons lawn they stood—staffers were proudly taking selfies with them, students were wandering amongst them, saying their names: Charlie Brown, Little Buddy, Paisley. These were the 100 Giants of Otis College, Sequoia tree seedlings that were whisked off this week to their final home in the Trail of 100 Giants in the Giant Sequoia National Monument near the Sequoia and Kings Canyon National Parks in northern California. 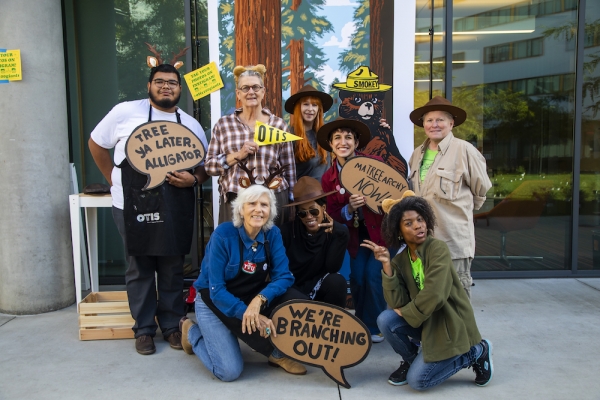 It’s been over a year that Otis faculty, staff, and students have been helping to germinate over 140 seedlings as part of Shelley Forbes’ 100 Giants project, which she conceived during Otis’ Centennial “Find Your 100” campaign. There was palpable excitement at the project’s culmination on November 6, during which the Otis community celebrated the trees with music, food, selfies, a bake sale, a fundraising auction, and print-making activities.

Forbes, circulation manager at the Millard Sheets Library (and also an Otis alum), collaborated with WildPlaces, a re-wilding nonprofit led by founder Mehmet McMillan, who will take the seedlings to their new home this month. “The front of the library will seem very naked now that the trees are gone,” says Forbes of the popular growing spot on campus for the seedlings. “I am, however, very excited that the trees are going home to their native lands.” Previously, Forbes had germinated a group of Sequoia seedlings that were planted in an area she has dubbed “Alley of the Giants.” 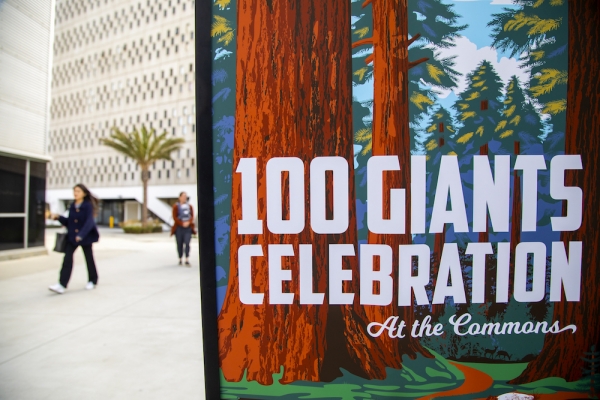 “I was very surprised at the number of people who wanted to participate. It was truly a case of the more the merrier,” Forbes says of the outpouring of community support for her project. “I was also very surprised at how big the seedlings got, and how stout their trunks became… I am grateful the Otis community seems to grasp the importance of reforestation and has joined me in this effort to mitigate climate change. I couldn’t have done it alone. It really does take a village.” 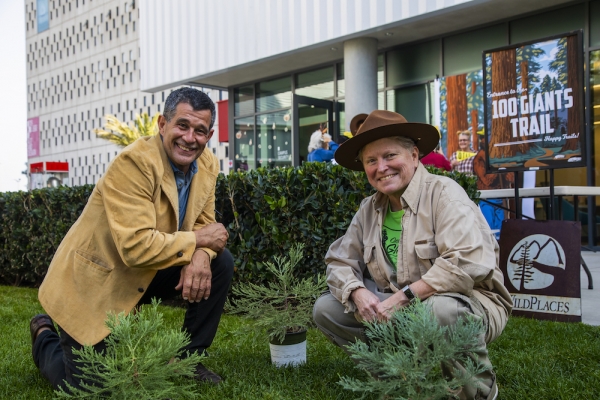 WildPlace’s McMillan saw the upside in collaborating with Forbes and Otis College on the project. “From a scientific point of view, giant Sequoias are one of the best carbon sinks there is. Imagine a tree growing massively over two- or three-thousand years—it’s holding carbon. It’s acknowledged that they are a big climate solution,” he says. “Economically, there’s tourism. From a restoration point of view, that’s what tourism looks like now. The new recreation is about stewardship and personal responsibility. Spiritually, it goes without saying that being in a forest with big trees is going to help your spirit… To come here and see inspired students creating and being creative is really fantastic. We’re not talking just L.A., we’re talking the whole of Southern California. It’s ownership of a great big area, it’s not just your campus anymore.” 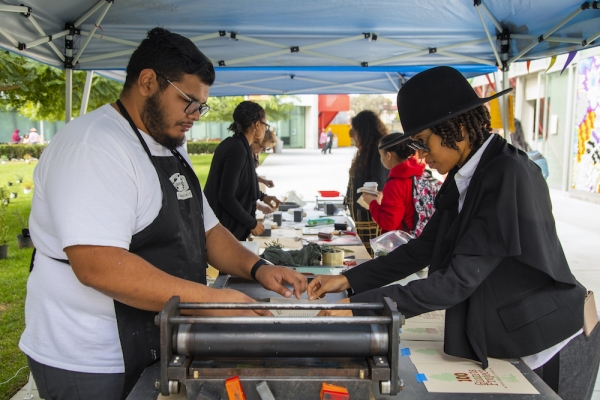 As part of the 100 Giants project, Otis Lab Press manager Leslie Ross-Robertson, who also germinated dozens of seedlings, designed and created a special-edition letterpress print, the proceeds from the sale of which were donated to WildPlaces. Ross-Robertson planned the culmination event, for which she designed and produced new signage, a selfie backdrop with Smokey the Bear, and also arranged to have several print-making stations at the event so that Otis students, faculty, and staff could make such souvenirs as postcards and leaf prints. “I am thrilled about the project, as it symbolizes the strength and longevity of the institution of Otis and benefits the environment along the way,” Ross-Robertson says.

As for whether there will be a 100 Giants sequel, Forbes says it’s a community-wide decision. “As of this moment, there are no plans,” she says. “If we were to do this again, I would like each germinator to have the experience of caring for their own tree from start to finish. It is a very rewarding endeavor.” 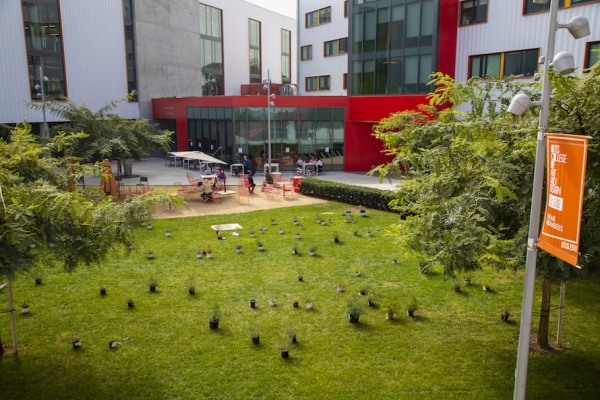 The science will always make a strong case for more projects like 100 Giants. “There is a Swiss study that was just completed that suggests that the planting of a trillion trees could rather quickly correct our climate problems,” Forbes says. “If only half of the trees we’ve grown [at Otis] live to be as old as the General Sherman [Sequoia tree], we will have participated in the removal of approximately 100,722.44 total metric tons of C02 from the atmosphere. I am delighted that our contribution has the potential to live on for thousands of years.”

The 100 Giants project is yet another way Otis College's commitment to the environment and sustainability plays out on a day-to-day basis. Other efforts have included the recent construction of LEED-platinum-certified residence and academic buildings, putting solar panels on the roof of the parking garage, having drought-resistant landscaping, and even increasing the amount of e-books available at the library. There’s an Environmental Steering Committee composed of faculty and staff, as well as a number of courses that have been part of the College’s curriculum that are centered around sustainability, including Urban Farming, Human Ecology, and Ban the Bottle, Abolish the Bag.

All photos by Fawad Assadullah/Otis College of Art and Design.