Sofia Enriquez, Otis College Communication Arts Alum, on Her Journey as an Artist | Otis College of Art and Design
Skip to main content

Sofia Enriquez, Otis College Communication Arts Alum, on Her Journey as an Artist 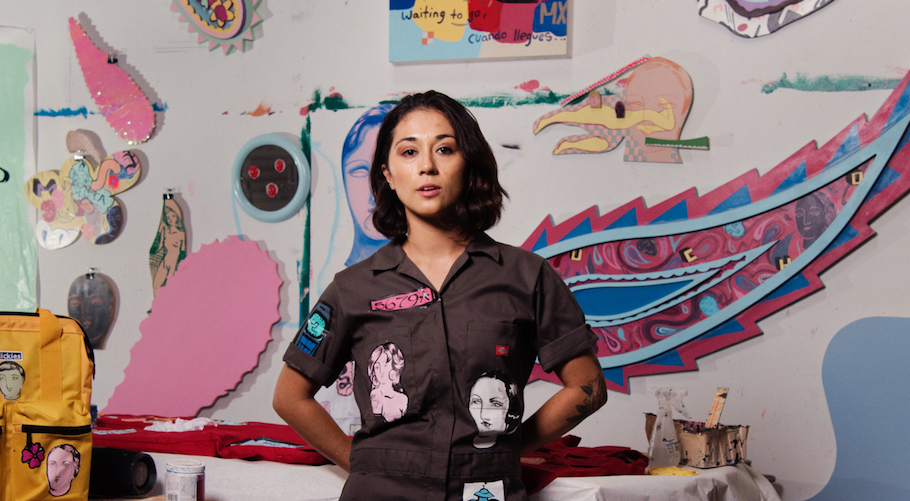 Learning the business side of art has helped propel Enriquez to high-profile projects near (Coachella) and far (Paris, Tokyo).
Lisa Butterworth

The studio where Sofia Enriquez (BFA Communication Arts/Illustration ’14) creates in Cathedral City, California, is filled with art books. There are paint buckets everywhere, wearable pieces of art drape from hangers, and tarp and tape covers the floor. In fact, it’s exactly the way her studio space at Otis College was set up, her first dedicated place for making work. “Otis taught me how I work individually, how I function, what resources I need, how to ask for stuff,” says the artist, who lives in Palm Springs. 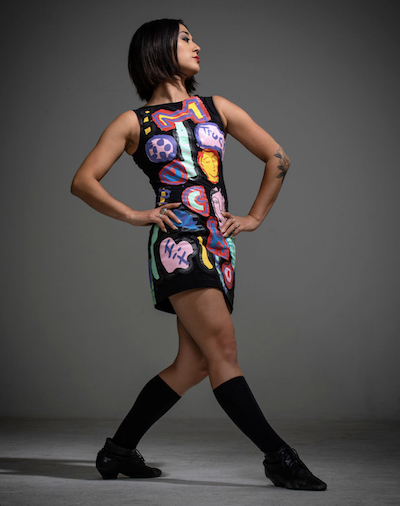 It’s also where she learned the business side of art—the importance of having a resume, a business card, a website. “All of that was very foreign to me, but now it’s making sense because that’s how I’m surviving,” Enriquez says. “I’m basically running a business.” Thriving might seem like a more accurate word choice, given that her business now involves painting murals all over the world (from Paris to Tokyo to Otis College’s own Ahmanson Hall), making gallery work, designing and painting clothing, and even creating large-scale installations, like the one she did at this year’s Coachella Valley Music and Arts Festival.

Enriquez picked up drawing when she was in middle school, “when I was a really awkward kid who wore Slipknot shirts; when I was really trying to figure out where I belonged,” she says. She began to use painting as a way to channel her teenage angst and make sense of feelings she couldn’t articulate. In high school she painted even more, unleashing her creativity on clothing, too. “As a kid, we’d get a lot of donated clothes and none of them were really my size,” Enriquez says. Cutting up, stitching, and eventually painting on an item, she would “turn it into something that didn’t always look good, but it was mine.” She even won prom queen after plastering her high school campus with one-of-a-kind paintings, many of which were worn by her friends. “That’s when I was like, ‘Ok, I think I have to go to art school,” she says. 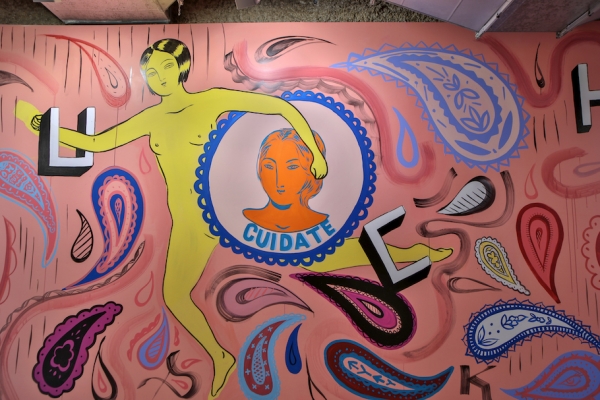 But that was easier said than done. Enriquez’s high school guidance counselor told her that art school was for rich kids, and her hard-working, blue-collar parents—who had immigrated to California from Mexico—had trouble comprehending how making art could provide a sustainable living. “So I just had to do it really, really well, so they could understand it,” Enriquez says. That started with her acceptance to Otis, where she began crafting the iconic visual language that continues to make her work so striking. Her colors evoke warmth and familiarity, but with just enough dark tones to give her palette some edge. She often includes words, which she pulls from her stream of consciousness, or even from conversations that are happening around her. Women’s faces are another hallmark. “I really like art nouveau vibes, and Greek sculptures,” she says. “The more I painted faces, the more I was simplifying them, not representing anyone specifically, almost like a symbol for people. I would see faces like that in Egyptian art, or ancient Asian paintings, and I was like, “Why can’t my work be as significant as something that was made in 5,000 B.C.?” So I use this similar approach.”

Enriquez first used paisleys, a recurring motif, in an experimental painting class. “I’d experienced really heavy moments in my life that I didn’t ever talk about, and I wanted to find something that was at the same speed as those moments… paisleys move like them.” Paisley is also a pattern that bridges cultures and classes—she saw it on textiles growing up (“not coming from a crazy privileged household”), and on the upholstered furniture of the fancy houses she helped her mom clean on her weekends home from school. Paisley overrules gender, too. “I really liked how they aren’t feminine or masculine. Then I started to relate to feminism, and I’m, like, “Oh yeah, maybe I’m subconsciously trying to say something. Maybe I’m trying to say, ‘Hey, can we just all be equals?’” 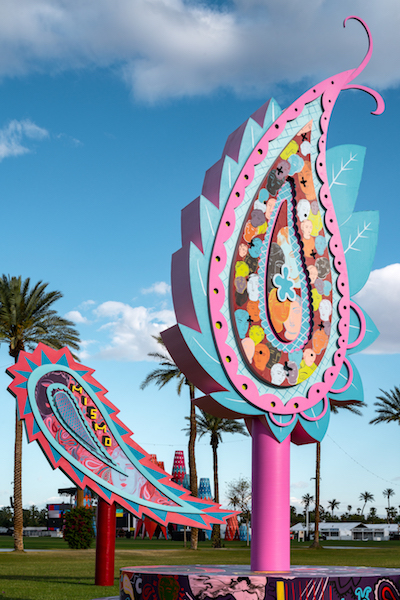 Large-scale, three-dimensional wooden paisleys were the focal point of her colorful installation at last summer’s Coachella, which was immortalized by hordes of festival-going Instagrammers and the New York Times alike. It was an installation that leveled up her career. “Before [someone would ask], ‘Oh, what do you do?’ I’d be, like, ‘Well, I paint and draw and stuff, I don’t really know,” Enriquez says. “Now it’s like, yeah, this is it. This makes sense because it’s big enough for me to take it seriously, and physically see what it is I’m really trying to say. It’s definitely helped me understand my own practice more. Now I can comfortably say, ‘Yeah, I’m an artist.’”