How do you develop a theory of living in the world if you can never escape the confines of your own mind? How can you develop a relationship to the world if your philosophy of the world places humans at the center, and everything else in a separate category? These were just the beginnings of some of the questions touched on in Graham Harman’s discussion with Andrew Culp that kicked off the inaugural summer Los Angeles residency for the Saas-Fee Summer Institute of Art.

In a two-hour lecture, Harman covered topics spanning literalism vs. metaphor, his theory of object oriented ontology, and the importance of the ability of creativity and the arts to touch on reality in our “post-truth” world. Culp provided counterpoints and helped to facilitate a rich discussion on the above topics.

Graham Harman is Distinguished Professor of Philosophy at the Southern California Institute of Architecture (on leave from the American University in Cairo). He is the author of 17 books, 15 already published and two in press. He has published over 250 articles in 19 languages, and has given over 300 lectures on six continents. He has previously spoken at Otis College as a Critic in Residence. In 2015, he was listed by ArtReview as the #75 most powerful influence in the international art world. He currently resides with his wife, Necla, in Dubuque, Iowa.

“You can’t paraphrase a poem”: metaphor as an approach to reality

“Metaphor is extremely important — you can’t paraphrase the universe,” Harman said, in a discussion about the importance of creativity in the world. If knowledge, as Harman posits, is a paraphrase of the observable (and inobservable essential) qualities of an object used by scientists to build theories and hypotheses, then metaphor is the tool of artists and creative to produce a thing that isn’t knowledge but nevertheless touches upon reality. “You can make any art ridiculous by paraphrasing,” Harman said. It’s only through the use of the indirect, achieved in poetry or paintings or other artistic output that touches on reality, rather than truth — which Harman stipulates is unknowable, since no one can transcend his or her own consciousness.

Culp provided a different perspective to Harman, helping facilitate discussion of the role of truth in the world, and in art. It’s a question of particular relevance in this “post-truth” world in which terms like “alt-facts” and “fake news” are bandied about daily. What is the role of truth? Where does it come from? How does it help us? These were questions Culp posed in response to Harman’s lecture. “[As humans] I don’t think we come in contact with truth, I think we come in contact with reality,” Harman replied.

Andrew Culp teaches Media History and Theory in the MA Program in Aesthetics and Politics and the School of Critical Studies at CalArts. His first book, Dark Deleuze (University of Minnesota Press, 2016), has been translated into numerous languages including Spanish, Japanese, and German. His essays on media, film, politics, and philosophy have appeared in Radical Philosophy, parallax, angelaki, and boundary 2 online. He also serves on the Governing Board of the Cultural Studies Association. 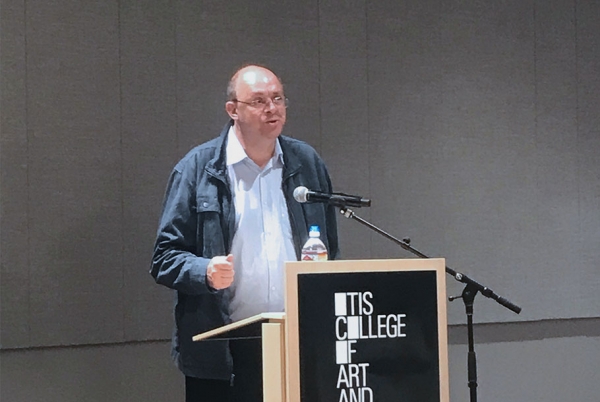 The Saas-Fee Summer Institute of Art (SFSIA) is a nomadic, intensive summer academy with shifting programs in contemporary critical theory academy that originated in Saas Fee, Switzerland in 2015 and moved to Berlin in 2016. SFSIA stresses an interdisciplinary approach to understanding the relationship between art and politics. This year, for the first time, the Saas-Fee Summer Institute of Art is hosted in Los Angeles by Otis College of Art and Design with participation of the MA Aesthetics and Politics in the School of Critical Studies at CalArts, in addition to the residency at the Berlin academy. Saas-Fee Institute of Art | L.A. will take place from May 21 – June 3 at Otis College of Art and Design.

Join Otis College this summer for thought-provoking lectures and residencies

Summer Residencies and Programs at Otis College offer artists and designers the opportunity to explore and create work in the unique and culturally diverse arts community of Los Angeles. Programs engage participants in challenging work alongside peers and colleagues who share the same creative goals and passion. Summer 2018 programs include traditional residencies in art, design, and writing; youth and adult intensive classes and camps; theory and practice-based courses; curatorial tracks; and professional development retreats. For more information on upcoming retreats, and lectures open to the public, please visit: https://www.otis.edu/summer-residency.

Halley Sutton is a graduate of the Otis College of Art and Design MFA Writing program.