After six years in the Air Force, the Communication Arts major is keeping her options open: “There are so many more different kinds of art and design jobs than I even knew,” she says.
Anna Raya

As a “Yellow Ribbon school,” Otis College has matriculated a number of veteran students who were enrolled and funded through the G.I. Bill and the U.S. Department of Veterans Affairs’s Yellow Ribbon Program. This year alone there are 15 veteran students at Otis, and seven veteran alumnx on Otis’s staff and faculty. Dr. Carol Branch, Assistant Dean of Student Affairs, works closely with veteran students as a way to honor her father, who served in the Navy during World War II. She also oversees the Student Veteran Committee, which coordinates academic and social programs to help veteran students with the transition from the military to a thriving college and then professional career in art and design. “It has been a labor of love working with Otis student veterans. They are invaluable to the campus community, giving of their time and energies,” she says. “Our veterans bring a mature outlook on world events to campus discussions, a diverse perspective to the classroom,  and leadership to the college.”

On this Veterans Day, we honor Otis’s veteran students in part by spotlighting Suzy Perreault (’23 Communication Arts, Graphic Design), who served six years in the Air Force. Having grown up in Los Angeles, Perreault knew of Otis College, but never imagined she’d be able to follow the creative pursuits she first discovered in high school photography classes. The change from the orderly, regimented world of the military to college hasn’t always been easy for Perreault, but as she says in the interview below, “Knowing that Otis has a veterans group and that I’m not the only veteran on campus has been a pretty big deal in making me feel like I’m not alone in this.” Read more about Perreault, her experience in the military, and her goals for life after graduation below. 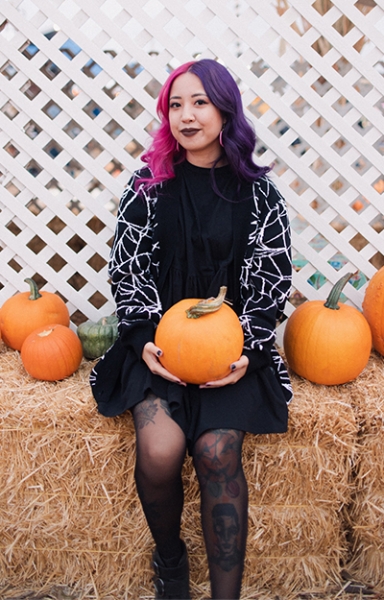 When you were a kid, what did you want to be when you grew up?

I always wanted to be an artist or do something artistic as a career. I’ve visited and revisited the idea of pursuing art many times in the past and finally this is the closest I’ve ever been to actually doing it.

Which military branch did you enlist in, and what did you do throughout your career there?

I served in the Air Force as a language analyst supporting Operation Enduring Freedom. That’s all I’ll say about that, purely for security reasons, though I wish I could tell you all about it. I enlisted because I couldn’t afford to go to college, and because I thought I might make a career out of the military. But that of course didn’t happen. My life now is nothing like I imagined it would be when I was younger. Life is funny that way.

At what point did you become interested in a career in art and design?

Taking photography classes in high school is what really got me interested in art. I wanted to be a combat photographer in the Air Force, but they were in critical need of Pashto linguists and I scored highly on the linguistic test, so that’s what I did. That’s why they call it the “service,” after all, because you’re at the service of your country.

How did you find out about Otis and its veterans program?

I had known about Otis for a long time since I grew up in Los Angeles. But learning that Otis was a participant in the Yellow Ribbon Program made it a no brainer for me to apply here.

What was the transition from the military to life as an art and design student like?

I started Otis in Foundation year, although I came in with a handful of college credits, which made it easy for me to take extra classes towards a minor in Photography. Coming to art school from six years in the military seems like it would be easy, but it was really hard for me. College seemed too free and laid back because I was used to everything being strict, regimented, and there not being much room, if any, for error. I still struggle with that sometimes, but it’s getting better.

Has Otis helped you feel a sense of belonging as a veteran student in any way?

Knowing that Otis has a veterans group and that I’m not the only veteran on campus has been a pretty big deal in making me feel like I’m not alone in this. Most of my friends in the service have stayed in the service because it’s much easier to stick with what you know than to start all over and go back to school, especially at my age.

Have you connected with other veteran students at Otis?

Aside from a couple of in-person meetings when I first got here, distance learning has made it difficult to get together with the other veteran students, which is a shame. Nonetheless, I’ve made some valuable connections here, and I tend to gravitate towards other students that seem just as serious about being here as I am.

What do you hope to do once you graduate from Otis?

I think I’d like to be a photographer, as that’s what my first real artistic passion was ever since I started learning about it in high school. However, it’s still a toss-up at this point because not only am I majoring in graphic design, but since being here, I’ve learned that there are so many more different kinds of art and design jobs than I even knew. I don’t want to put all my eggs into one basket just yet.

All photos courtesy of Suzy Perreault