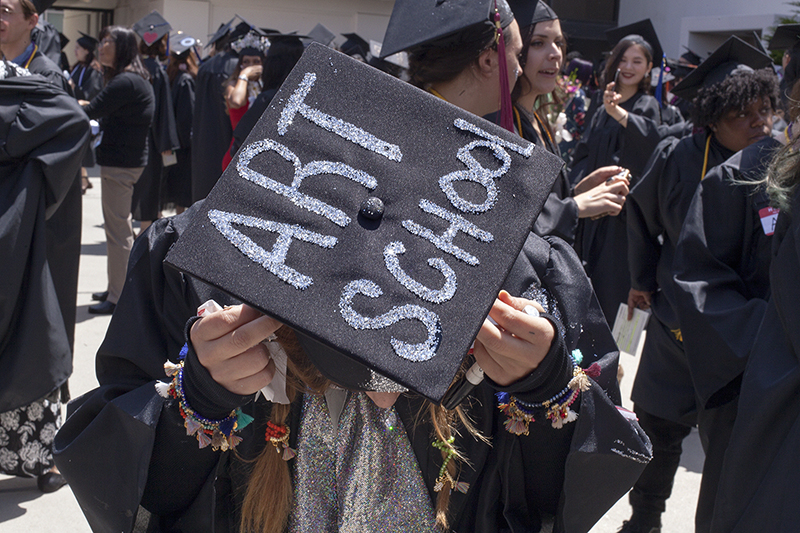 The 2019 Otis College Commencement Ceremony will be available via livestream at https://www.otis.edu/student-activities/commencement-2019 beginning at noon on May 12, 2019.

MacArthur “Genius” award-winning choreographer, performer, and author Elizabeth Streb will deliver the commencement address at the Otis College of Art and Design’s 2019 Commencement Ceremony on Sunday, May 12 at The Marsee Auditorium at El Camino College, when students from seven undergraduate and three graduate programs will receive their diplomas. Streb, along with alumnus artist Gajin Fujita, will receive an honorary degree.

Streb is known for her risk-taking choreography, and the incorporation of elements of mathematics, physics, and text, video, and and projections during performances. Together, with Fujita, they embody some of the strongest elements of Otis College’s creativity-centric programs, which encourages students to explore the boundaries of their mediums to create something new.

Streb has dove through glass, allowed a ton of dirt to fall on her head, walked down (the outside of) London’s City Hall, and set herself on fire, among other feats of extreme action. Her popular book, STREB: How to Become an Extreme Action Hero, was made into a hit documentary, Born to Fly directed by Catherine Gund (Aubin Pictures), which premiered at SXSW and received an extended run at The Film Forum in New York City in 2014. Streb founded the STREB EXTREME ACTION COMPANY in 1979. In 2003, she established SLAM, the STREB Lab for Action Mechanics, in Williamsburg, Brooklyn.

Streb received the John D. and Catherine T. MacArthur Foundation ‘Genius’ Award in 1997. She holds a Master of Arts in Humanities and Social Thought from New York University, a Bachelor of Science in Modern Dance from SUNY Brockport, and honorary doctorates from both SUNY Brockport and Rhode Island College. Streb has received numerous other awards and fellowships including the Guggenheim Fellowship in 1987; a Brandeis Creative Arts Award in 1991; two New York Dance and Performance Awards (Bessie Awards), in 1988 and 1999 for her “sustained investigation of movement;” a Doris Duke Artist Award in 2013; and over 30 years of on-going support from the National Endowment for the Arts (NEA).

Fujita’s works exemplify the cultural melding and class contradictions that are an essential part of the fabric of Los Angeles. The son of Japanese parents and raised in Boyle Heights, as a teenager, Fujita became fascinated with graffiti, joining the tagging crews KGB (Kidz Gone Bad) and KIIS (Kill to Succeed). Through graffiti, Fujita followed his own path towards fine art and received his BFA from Otis College of Art and Design and his MFA from the University of Nevada, Las Vegas, where he found mentorship under art critic Dave Hickey. Lauded by Christopher Knight of the Los Angeles Times as “the most important 21st century iteration of graffiti’s influence on art,” Fujita’s paintings incorporate graffiti language, traditional iconography drawn from Edo-period woodblock prints, and symbols of West Coast culture.

His work has been included in museum exhibitions worldwide including in exhibitions in Australia, Vienna, at the USC Pacific Asia Museum, the Kemper Museum of Contemporary Art, the Los Angeles County Museum of Art, and more. Fujita’s mural-scaled painting, Invincible Kings of This Mad Mad World (2018), will be exhibited in the New York leg of Beyond the Streets, an exhibition that traces graffiti’s historical significance and continued resonance in contemporary culture. Fujita’s 2008 major painting titled The Saints, which was commissioned by Prospect.1 New Orleans, is currently on view in Tsuruya Kōkei: Modern Kabuki Prints Revised & Revisited at the USC Pacific Asia Museum, Pasadena through July 14, 2019.

A version of this article was originally published on April 26, 2019.