Elizabeth Jeane “Izzy” Savage, an Architecture/Landscape/Interiors major, has been named Valedictorian of the Class of 2015. This award is bestowed annually on the member of the senior class whose work presents the pinnacle of academic excellence. This graduate wears a special medallion at the Commencement ceremony. Izzy was chosen for her consistently stellar academic performance throughout her Otis career and the exceptional quality of her work, which has focused on designing environments that promote vibrant social and cultural interactions. 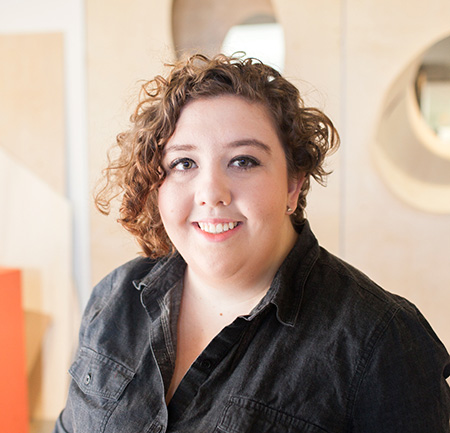 Izzy grew up in Santa Barbara, where as a child she helped her father build a playhouse and remodel the family home. Once in A/L/I she quickly distinguished herself both with her ability to form close bonds with peers and colleagues, and with her capacity to stay highly focused, engaged and ambitious. Izzy won the A/L/I program’s Studio 1, 2, and 4 Excellence in Design Awards, and exhibited two of her projects in the program. She has also completed two successful internships at local firms: John Friedman-Alice Kim Architects and Bricolage Design.
Last year, Izzy won the prestigious Angelo Donghia Foundation Senior Scholarship. Her project Illuminated Tapestry documented her proposed renovation of the Santa Fe Building in downtown Los Angeles into live/work apartments meant to stimulate a socially interactive and vibrant culture, uniting the building’s inhabitants with the general public. Among her future goals is a desire to teach  ̶  to help future students become inspired in their craft just as her professors have inspired her.  A dedicated student, generous colleague, and remarkable talent, Izzy truly embodies the aspirations of the College. Samples of her work may be seen at izzysavage.com

Students whose cumulative grade point average is 3.5 or higher earn a place on the Dean's List.