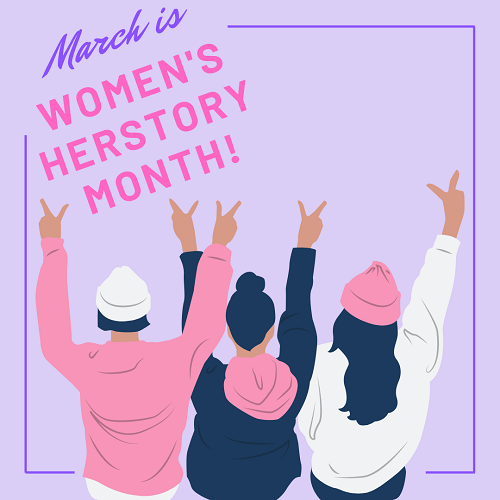 Join us for a celebration of Women's* Herstory Month, beginning March 1st as we recognize the phenomenal contributions womyn have made nationally and inernationally. Several departments are hosting talks and discussions featuring amazing educators, artists, and designers.

Womyn’s Herstory month is a time for us to celebrate the many contributions of women that have often been overlooked. This is a time for us to learn more about the impact many women have had within the U.S. and beyond, through their activism, advocacy, and community building. We are excited to share our Womyn’s Herstory Month calendar of events listed below, featuring phenomenal programs that we encourage you to attend.

In honor of International Women’s Day, we are spreading the word on this year’s theme, #BreaktheBias. You can learn more about how to get involved and raise awareness about gender equity and gender bias, challenging ourselves to unlearn gendered norms that have created barriers and limitations for women across the globe. Read more about how to practice your own activism and advocacy in honor of International Women’s Day.

*In an earlier email and webpage, we spelled the word  "Women" as Womyn in an effort to be inclusive and honor the feminist evolution of the term; however, there is a history of the use of the term Womyn to be an anti-transgender term that has been used to only refer to women assigned at birth. Our intention is to be inclusive and affirming, and for this reason we have reverted back to the term Women. You can read more about the use of the terms Womyn vs. Womxn here.

Special thanks to all of our co-sponsors: Diversity, Equity, and Inclusion Office, Environmental Design Department, Fine Arts Department,  and Liberal Arts and Sciences Department.