Otis College of Art and Design students, along with Los Angeles community members, will have the chance to champion women’s history during the month of March by highlighting the work of women (cis and trans) artists on Wikipedia. The Otis College Millard Sheets Library is organizing a Wikipedia Edit-A-Thon in conjunction with the campaign Art+Feminism in honor of Women’s History Month! The event will take place in Library Classroom #100G on Thursday, March 15, 2018, from 4pm to 7pm.

The Art+Feminism Wikipedia Edit-A-Thon is a response to the well-known gender gap on Wikipedia, and part of an international campaign to improve content on cis and trans women and the arts on Wikipedia. Events have taken place at institutions such as The Museum of Modern Art, New York; Tate, London; Yale University, New Haven; McGill University, Montreal; Archives Nationales, Paris; and many more.

During the event, participants will be asked to update or create Wikipedia pages for cis and trans women artists, many of whom have taught at or graduated from Otis College. Some of the artists on the list for the Wikipedia Edit-A-Thon include:

·       Marisa Matarazzo, current faculty member for the Grad Writing program, and author of a collection of short stories, Drenched.

·       Soo Kim, a faculty member at Otis College who uses cutting and layering techniques in rendering photographs to introduce areas of disruption in what we tend to take for granted.

·       Sarah Shun-lien Bynum, former Otis faculty member and author Madeleine is Sleeping, which was a finalist for the National Book Award and winner of the Janet Heidinger Kafka Prize.

·       Rebecca Jo Morales, a graduate of Otis College, who works as a field biology instructor and paper conservator.

·       Hideko Takahashi, a graduate of Otis College, who currently works as a children’s book illustrator.

More than 50 percent of visual artists working today are women, but women artists on average make 81 cents to every dollar that male artists make. In the United States, women make up half of the graduates from MFA programs, yet only 30 percent of artists featured in commercial galleries are women. Finally, only five women made the list of the top 100 artists by cumulative auction value between 2011 – 2016. Otis College’s Art+Feminism Wikipedia Edit-A-Thon seeks to shine a light on all the valuable work being done by women artists nationwide that is not necessarily being recognized on a national scale.

“This is a great opportunity to continue our ongoing commitment to celebrating diversity, as well as to introduce current Otis College students to the outstanding work being done by Otis College alums,” said Natalie Arps-Bumbera, adjunct faculty professor of Liberal Arts and Sciences at Otis College and a graduate of the Otis College graduate writing program. As one of the most diverse institutions in higher education, Otis College is committed to creating an artistic landscape that represents what we already know to be true: that a diverse perspective in art and creativity sows a more fertile ground for new and interesting projects to flourish, no matter the artist.

The event is open to members of the public, who are encouraged to attend and in doing so, also visit some of the exhibits on display at Otis College. The participation of Otis College artists, art students, and surrounding Los Angeles community in the Wikipedia Edit-A-Thon will create some much needed positive change in the digital landscape of art and design.

The event will also provide students with an opportunity to apply skills crucial to their success at Otis College including digital literacy and critical thinking. Moreover, editing Wikipedia empowers students to learn information literacy from the inside-out by providing them with first-hand experience in knowledge creation. “What better way for students to get a sense of how knowledge is created than to create it themselves,” said Sue Maberry, senior director of the Library and Learning Centers at Otis College, and one of the organizers of the event.

Register for the Art+Feminism Wikipedia Edit-A-Thon, find more information about the event, and share on Facebook! If you'd like to support this event, consider following the edit-a-thon on social media. Participants and moderators will be using the hashtags: #otiscollege; #artandfeminism; #AF5; and #noweditingaf. 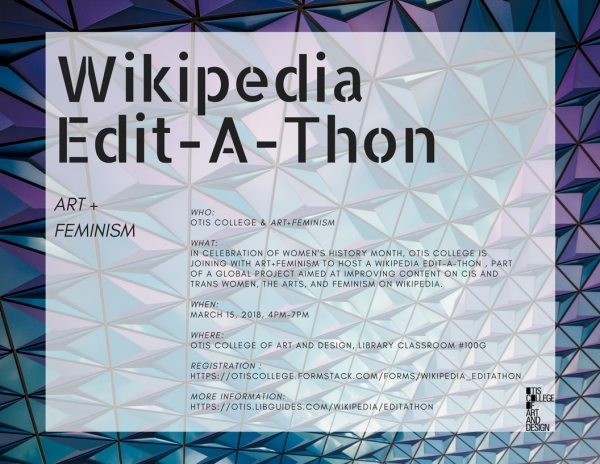