Otis College is pleased to announce the 36th Annual Scholarship Benefit and Fashion Show with Special Guest Jason Wu, this year taking place on the Elaine and Bram Goldsmith Campus on May 5, 2018. Featuring student work that is the result of a rigorous, year-long mentorship program with leading industry talent, the Fashion Show will feature over 125 designs from this year’s junior and senior fashion students. Each design is grouped into a specific creative direction as identified by the industry mentors who work with Otis students, this year focusing on the overall theme of Celestial Bodies. Following the fashion show will also be the chance to have a Meet-and- Greet and photo opportunity with Special Guest Jason Wu. 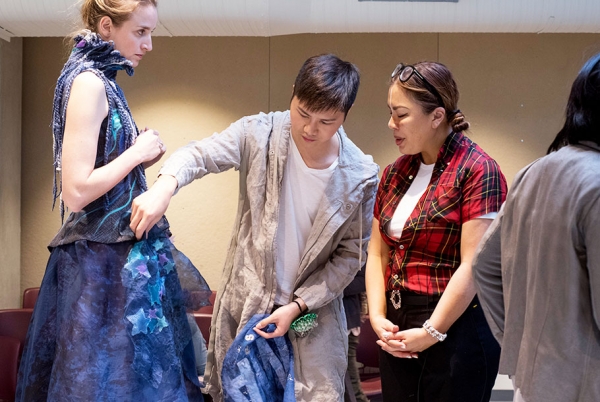 Of particular note this year is the close collaboration that students have enjoyed with Universal as represented by Marisol Bradford, who challenged students with creating garments inspired by the Jurassic World franchise. As part of this collaboration, students have had access to physical and visual materials from the studio to consider and structure their designs, addressing the theme of recycling old materials for new, adaptive uses.

In addition, the involvement of costume designers Jose Fernandez and Louise Mingenbach represents a close collaboration between Otis and entertainment industry talent. Fernandez, the owner of Ironhead Studios, is one of the leading costume designers for numerous Hollywood productions, including many of the Marvel Studios films. Mingenbach, a close collaborator with Fernandez, is responsible for costumes featured in the X-Men series as well as feature films Hancock and the upcoming Godzilla: King of the Monsters. Both designers have challenged seniors with creating an evening wear collection based on the signs of the Zodiac.

Rod Beattie, of Bleu, questions what the future of swimwear will look like, and asked students to find out by creating pieces that were extraordinary, sexy, modern, and sophisticated.

Marisol Bradford, Vice President Production and Design, Universal Brand Development, worked on a special collaboration with students, offering them an inside look at the upcoming 2018 feature film Jurassic World: Fallen Kingdom, and challenged students to create designs that were inspired by the Jurassic World franchise. Students were directed to use the DNA of dinosaurs as inspiration to create a sportswear collection that utilized texture and pattern to create pieces that reference recycling and rejuvenation.

Claudia Cividino, CEO of Bally Americas, tasked students to create a collection of refined luxury separates for men and women, inspired by the Earth, using shape, proportion and fabric mixes that also paid homage to Bally’s heritage of craftsmanship.

Jose Fernandez of Ironhead Studios, and costume designer Louise Mingenbach, are responsible for the finale assignment for senior students to end the show with an elegant evening wear collection inspired by each of the sun signs of the zodiac

Johnson Hartig, founder of label Libertine, challenged students to take things beyond Earth, with a street-style sportswear and dress collection influenced by aliens and their spacecraft.

Davora Lindner for Prairie Underground, a sustainable sportswear collection inspired by a “Lunar Eclipse”, grounded in various weights and finishes of black and white, or navy and white.