“He is a new breed of ceramics student we have at Otis. It is no longer just about having your hands in mud,” says ceramics program coordinator Joan Takayama-Ogawa.
Diane Krieger

The books attest to the intellectual ballast of this Otis College senior majoring in Sculpture/New Genres and minoring in Contemporary Clay. (The books are primary sources for his senior thesis, which examines the link between postmodern materialism and actual raw materials.)

The fabrication tools and electronics, meanwhile, hint at Benson’s somewhat circuitous path to Otis. Before he was a ceramist, the 30-year-old Santa Ana, CA native was a blacksmith and a professional musician. Last year, the American Ceramics Society: Design Chapter of Southern California awarded him its Jeanne Ward Foundation Scholarship, which earns Benson a spot at the organization’s two-day ceramic festival at the Los Angeles Arboretum this spring. He’s also participated in group shows in Berlin and New York.

Benson reflects the eclectic dynamism of today’s Otis College ceramics students. “He’s a contemporary renaissance man,” says program coordinator Joan Takayama-Ogawa. “And Zack is just the tip of the iceberg. He is one example of many, many successful students here.”

Benson’s artistic training began in his father’s blacksmithing shop in Anaheim. An old-school artisan who prided himself on producing hand-made ornamental ironwork, Gary Benson, who passed away last year, made chandeliers, tables, and banisters for high-end customers like Magic Johnson and Oprah Winfrey.

Blacksmithing by day, Zack Benson also toured nationally as a drummer, guitarist, and songwriter with alternative rock and punk bands like the Cosmonauts. He was studying anthropology at Santa Ana Community College when the desire to create better concert flyers prompted him to enroll in art classes, which then led to painting and filmmaking, and eventually sculpture and clay. “I work in a lot of media,” says the multi-faceted artist, who transferred to Otis College in 2018. He says he feels equally at home with the rendering tools he deploys in virtual space as with the hand tools he uses in mold-making and woodworking. 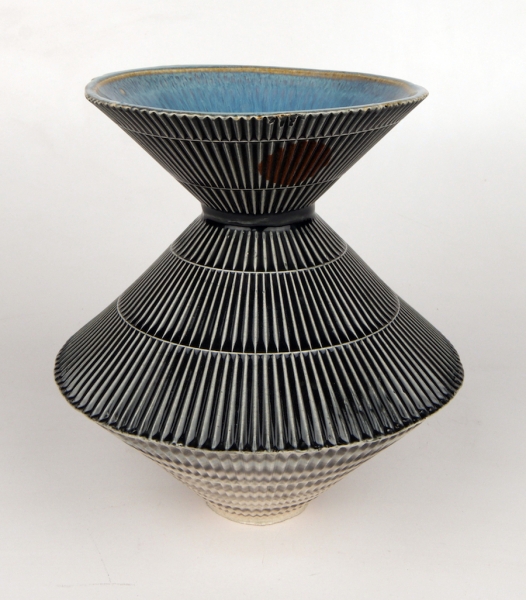 Benson doesn’t blacksmith anymore, but those years at his father’s forge continue to inform his ceramic practice. “There’s this idea of utility [with blacksmithing],” he says. “It makes sense to me.” He delights in transforming everyday things—say, an oxygen acetylene cylinder cap, or an old industrial lampshade from his dad’s metal shop—into unique aesthetic objects. Benson’s lampshade pot—inverted, cast and poured in porcelain—reminds him of a Brancusi tessellation. “I fell in love with this form,” he says, cradling his enlarged clay study of the gas safety cap, a $10 item at Home Depot. “I thought it looked like a Noguchi sculpture.” 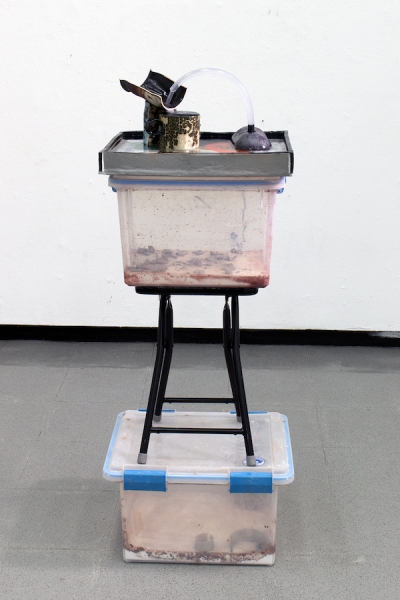 Sometimes Benson infuses beloved everyday objects with humor. A kitschy porcelain cat, cast from one found in his grandmother’s home, is a whimsical recurring theme in his portfolio. At times, his clay-play drips into other media. In an unconventional self-portrait, actually a meditation on the blood circulatory system, he fashioned a water fountain out of two “damp boxes” (plastic bins used to keep clay moist) separated by a stool.

Benson is the paradigm of what Takayama-Ogawa calls “a new breed of ceramics student we have at Otis, blending high technology with traditional methods. It is no longer just about having your hands in mud,” she says.

In the wider clay community, technological change has been slow in coming—possibly, Benson surmises, “because ceramics is one of our oldest technologies. And people tend to get stuck in the past.” But not under Takayama-Ogawa’s wing. His next ceramic project will require CAD software to laser-etch surface details. “I haven’t heard of any other school doing that,” he says.

Though forward-looking, Takayama-Ogawa fully embraces her role as a steward of Otis tradition. The program she rebooted in 2009 has a storied past, one she lived as a protégée of the late Ralph Bacerra. “Some really important movements come out of here,” she says, “and I feel the responsibility of inheriting the Otis legacy.”

Under founding chair and pioneering abstract expressionist ceramist Peter Voulkos, Otis drew worldwide attention as the birthplace of the craft-to-art California Clay Movement. Decades of prominence under succeeding leaders Helen Watson and Bacerra ended when the college shuttered its ceramics program amid the move to Westchester in 1997, where space was and remains at a premium.

Takayama-Ogawa is proud to “bring ceramics back to Otis, only in a different way. I’m using 3D printing and more technology in clay,” says the respected pioneer in this still-emerging form. As the ceramics program’s only full-time faculty member, Takayama-Ogawa oversees three other instructors and is recruiting more as she prepares to roll-out a new clay workshop series.

While ceramics does not now exist as a standalone major at Otis, a half-dozen courses are embedded in the Fine Arts and Product Design majors and open to all Otis students as electives. Any given semester, these courses enroll about 70 students—a cross-section of Otis undergraduates, MFA students, and adult learners taking courses through the college’s Extension program. For the hard-core, a Contemporary Clay minor is available. While the minor is small—with only five currently registered students, including Benson—Takayama-Ogawa translates that intimacy into a major strength. “We’re a boutique ceramics program,” she says, “and a feeder to outstanding MFA programs around the country.”

Takayama-Ogawa employs Benson as her teaching assistant at Otis. He is her fifth mentee in 10 years to win the ACS’s Jeanne Ward Foundation prize. She recently nominated him for the 2020 Wingate Fellowship and isguiding him through the rigorous application process. Should he win, he’ll be her third mentee to do so. The national award—and its generous $15,000 prize—would establish Benson as a rising leader in the next generation of ceramic artists, just as it did for previous Takayama-Ogawa mentees and Wingate Fellows, Christopher Fong (BFA Product Design, ’13) and Emi Ichikawa (BFA Product Design, ’15). 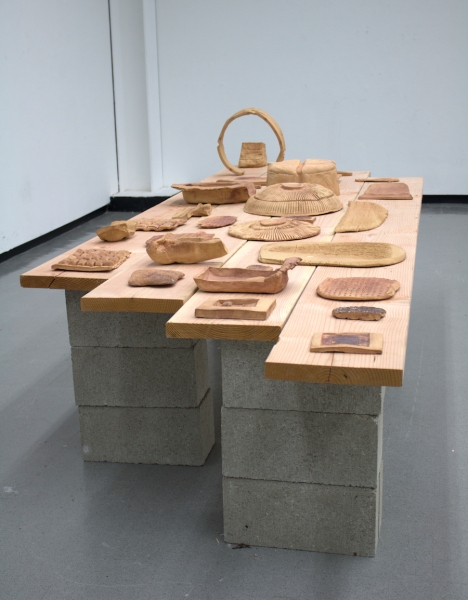 Last spring, Benson took first prize in Otis College’s junior ceramics show with an installation indexing utilitarian objects found in the ceramics studio. Casting himself in the role of postmodern anthropologist, he took clay impressions of a light switch, a floor fan, a fire alarm, a broom head, a dustpan, a stool leg, and so on. “I was thinking about the legacy of Voulkos at Otis—where are we now, where will we be in the future,” he says. “I was thinking about ceramic history.”

To find out more about Extension classes in Ceramics, click here. Joan Takayama-Ogawa will be in conversation with artist Michael Sherrill on Friday, February 21, 2020 at Otis College. The event is free and open to the public. For more information and to RSVP, click here.

All photos courtesy of Zach Benson.