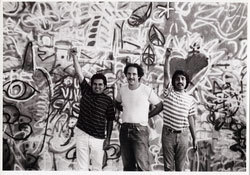 Carlos Almaraz ('74, MFA Fine Arts), born in Mexico City in 1941, grew up in Chicago and Los Angeles. Considered one of the preeminent members of L.A.’s Chicano School during the 1970s and ‘80s, Almaraz helped bring Chicano street art into mainstream art circles. ...

As a member of the Los Four collective, together with Frank Romero, Roberto de la Rocha and Gilbert Lujan, and his wife Elsa Flores Almaraz, he collaborated on many public murals in L.A. He was also a prolific painter and printmaker whose work captured the vitality and life of East Los Angeles neighborhoods such as Echo Park with bright violets, hot pinks and bloodlike reds and expressionistic paint handling. From his apartment window, he painted the view in various incarnations, from serenely bucolic to hot, feverish and dangerous. Despite his untimely death in 1989, Almaraz continues to influence younger generations through exhibitions and collections. 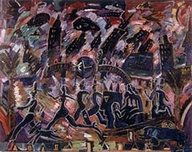 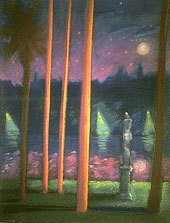