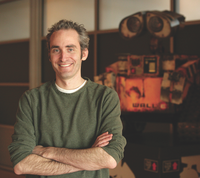 Derek Thompson (’94) first learned to tell stories in his major, Illustration. Many years later, as storyboardist for Pixar’s WALL-E, he and his team turned out more than 157,00 drawings. His early career included stints as a freelancer at Electronic Arts, Dark Horse Comics and Maverick Studios before he joined Industrial Light and Magic, and then Pixar in 2005. He finds the collective studio experience exciting, stating “The storyboard artist has to wear a lot of hats, thinking like a director, actor, editor, cinematographer, production designer, art director, and more. Then you have to be able to draw your ideas to communicate them.” ...

Since the age of five, Thompson has been obsessed with drawing dinosaurs and monsters. In a recent workshop on character and creature development he led with more than 150 Otis students, the topic was the psychology of fear. He reviewed the students’ sketches of aliens, bugs, and dark closets, and explored with them ways to create pathos and emotional responses using characters and narrative.