For more than 20 years Diane Gamboa ('84) has been producing, exhibiting, and curating visual art in Southern California. She is a recipient of a California Community Foundation Individual Artist Grant, and her recent solo exhibitions include "Bruja-Ha" at Tropico de Nopal Gallery and "Chica Chic" at Patricia Correia Gallery in Santa Monica. ...

In the early '80s, she photographically documented the East Los Angeles punk rock scene. Throughout most of the '80s, she was associated with ASCO, a conceptual multi-media performance art group. Gamboa organized numerous site-specific "Hit and Run" paper fashion shows - created as easily disposable streetwear. The shows became quite popular and some outfits ended up in museums.

During the '90s, she found herself using the tension and stress involved in the urban environment to create new works, leading her to develop a Pin Up series of 366 ink drawings on vellum as an in-depth study of male-female relationships. These works led to her "Endangered Species" series, which recreates some of the Pin Up drawings in a three-dimensional form.

Many of the figures in the Pin Up drawings are covered in tattoos, which is an ongoing fascination for Gamboa.

She has also been involved for more than twenty-five years in art education, ranging from after-school programs to college and university settings. 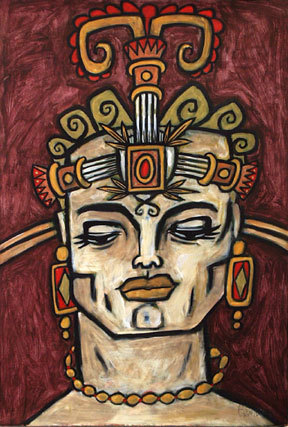