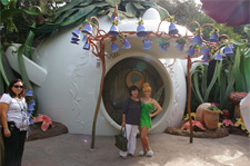 In 2005, Ellen Hee-Jung Jin Over (‘96, Communication Arts) received an Emmy in the Individual Achievement category for her work on the animated show Jakers! Adventures of Piggley Winks. ...

The heart of her body of work as an art director largely stems from Mike Young Productions (TV animation company), where she worked alongside a creative, intelligent staff comprised of more than 100 animators, artists, writers, and executives on numerous projects. Mike Young Productions is one of the largest independent animation studios in the world; his animators run the gamut from the more traditional 2D to cutting-edge, 3D / CGI.

Over the years, her specific work includes background painting on Tarzan II, Bionicle, Clifford the Big Red Dog and art direction for He-man the Masters of the Universe, and the multi-Emmy winning Jakers! Adventures of Piggley Winks. She also had the pleasure of working overseas as a digital BG trainer and supervisor in New Zealand, India, and China.

She has worked on the Emmy-nominated TV show Bratz, based upon the mega-hit fashion doll manufactured by MGA Entertainment. The toy line first appeared on retailers’ shelves in 2001 and has since become a global phenomenon in the kids’ merchandising market, often ranking as the #1 fashion-themed doll.