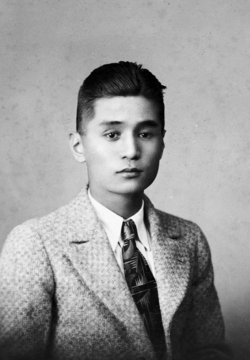 Hideo Date was born in Osaka, Japan, and emigrated to California in 1923. After graduating from high school, he enrolled at Otis but left after a year to pursue the study of traditional ‘nihonga’ brush painting in Japan. This style melded the strong use of line in Japanese painting with Western techniques of perspective and modeling.

Date returned to L.A. where, during the late 1920s and 1930s he says that he and his fellow artists “were influenced by Orient across the Pacific just as N.Y. was influenced by Europe across the Atlantic. He was part of the so-called "Independents," a group of L.A.-based artists who rejected modernism and described their work as “Linear-composition.” ...

Date and his colleagues fell under the influence Stanford MacDonald-Wright, who oversaw the Los Angeles Art Students League and was one of the originators of Synchronism, the “orchestration” of colors in paintings based on “major” and “minor” color scales —as well as the avant-garde art scene. Macdonald-Wright’s works impressed Date, who admitted: “I was flabbergasted, such colors I had never seen before.”

Date spent the 1930s creating art and exhibiting through groups such as the College Art Association, the Foundation of Western Art, the Los Angeles Oriental Artists Group, and the Los Angeles Art Association. Because he held onto nearly all of his work, he had to make his living from odd jobs, once working on a mural at Mary Pickford’s mansion. He also depended on the generosity of friends, the occasional commission, and private teaching.

Art exhibitor Hammond Sadler once described Date’s work as being “primarily interested in linear movement and color. Combining these elements in a manner never attempted by the older Japanese painters, he has scorned the strictly traditional for ‘Datean.’ Particular note of his work in watercolor must be made. The finish, developed by him, is unsurpassed in its jewel-like surface.”

The outbreak of World War II sent Date to Wyoming’s Heart Mountain concentration camp, where he taught art privately to other Japanese-American inmates. After the war, he went to New York and traveled extensively, including trips to Italy and France. 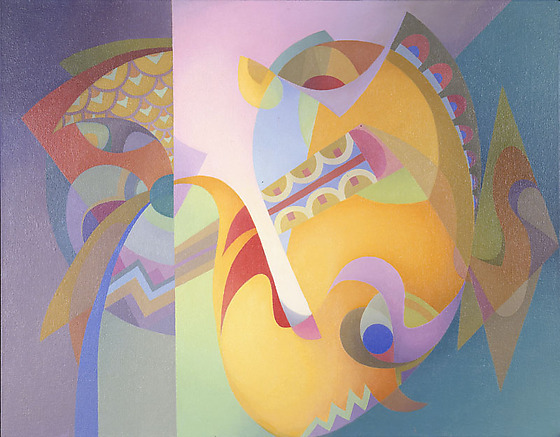 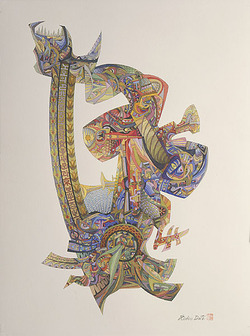