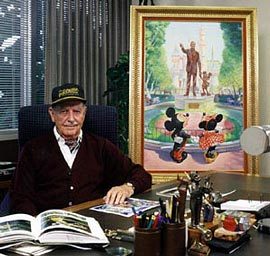 John Hench ('28) had a distinguished career as a Disney artist for more than a half century. His work included animation and filmmaking. Known as a lifer, he received the prestigious Disney Legend Award. He began as a sketch artist, and when Walt Disney recognized his special talents, he went on to do background painting and special effects for such classics as Fantasia, Dumbo, Cinderella and Peter Pan. The special effects he created for for the hydraulic giant squid in 20,000 Leagues Under the Sea won him an Academy Award in 1954. Hench was also known as the "official portrait artist" to Mickey Mouse. ...

In the latter part of his career, Hench worked as an Imagineer on the development of Walt Disney World, Tokyo Disneyland, EPCOT and Disneyland Paris, and contributed to other Disney attractions. One of his most recognizable designs is the Olympic Torch for the 1960 Squaw Valley Winter Olympics.