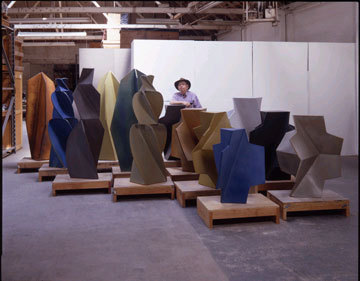 John Mason ('57), born in Madrid Nebraska in 1927, began exhibiting his powerful ceramic work at L.A.’s legendary Ferus Gallery in the late 1960s. He was one of the leaders of a revolution that transformed clay into a fine art medium. Mason is closely allied with Peter Voulkos, and the pioneering Otis Clay group. During the 1950s and 1960s, both master ceramicists pushed the boundaries of functional ceramics to create massive, energetic sculpture that broke the field wide open. ...

As a sculptor, Mason has always demonstrated an intuitive understanding of the plasticity of form. He works with relatively simple three-dimensional forms to exploit his interest in spatial perception, mathematical progression, and modular repetition. His fascination with torque and rhythm results in forms that twist, curve, spin and wind in space. He builds huge, rough pots, walls, monumental rectangles, x-shapes and crosses that communicate vitality as well as grace. 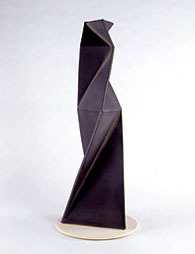 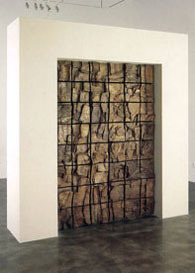