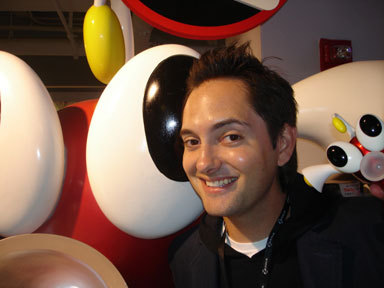 Kris Paulson ('03) and a four-person team of young designers at Big Monster Toys in Chicago stormed the toy design world during the 2005 holiday season with their wildly popular animatronic MP3 player named 'iZ'. Time magazine listed the iZ as one of 2005's top inventions. The alien eyes of iZ echo with the music's rhythms, and its horn pulses in rainbow colors. Users can create their own rhythms and tracks by twisting and turning the alien's ears or pressing its belly to change the beat. ...

From Big Monster, Kris moved back to Hasbro, where he had interned during his study at Otis. Recently he has designed the room tech clock and lamp (at left). The alarm clock looks like a mix between an iPod and a Goomba: it stomps its fists on the table, plays back the radio or pumps out tunes from a connected MP3 player. It communicates with the lamp through a wireless link so when the alarm goes off, the lamp comes on and lights up the room. 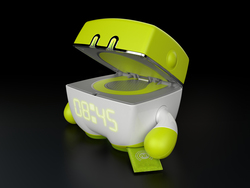 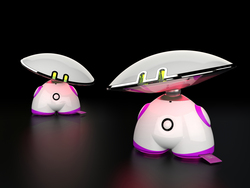