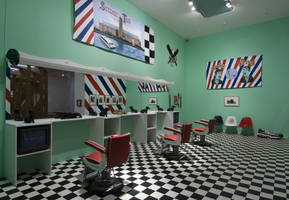 Mario Ybarra, Jr. (’99, Fine Arts) describes his art as simply an effort to "translate the experience growing up in my neighborhood, the stuff that was around my grandma's house, and around in my mom's house." He grew up in Wilmington, a city with a large Latino population, surrounded by the growth of hip-hop, graffiti and drug culture. His work and community activism have been fueled by the difficulties he has witnessed. He is a lecturer in Otis' Fine Arts Dept. His work has been included in exhibitions at the Institute of Contemporary Arts, London, and the California Biennial at the Orange County Museum of Art.. ...

Rita Gonzalez, a consulting curator for the 2008 Whitney Biennial that featured his work, said of Ybarra that he is part of a new generation of Chicano artists who are shaped by the music, MTV and local subcultures. "It's not like being Chicano is not part of his consciousness,” notes Gonzalez, “it's just that he's telling the stories in different ways, not through painting the Virgin of Guadalupe."

Ybarra conducts workshops for kids around the country with other artists in the "Slanguage" artists' collective. He and his artist wife, Karla Diaz, also organize shows for New Chinatown Barbershop in L.A. Ybarra has also curated a survey of graffiti art at the Inshallah Gallery, L.A. and an exhibition of ball-pen drawings by inmates at Pelican Bay State Prison. 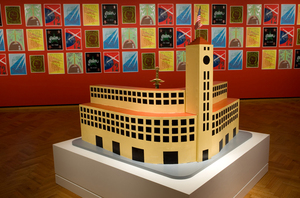 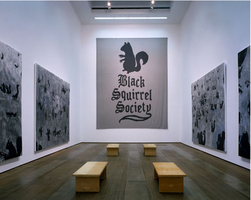