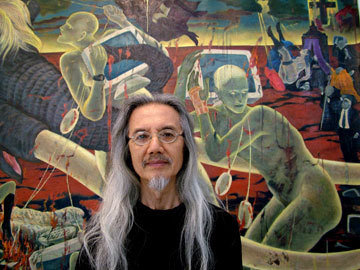 Masami Teraoka ('64, MFA Fine Arts '68) was born in Onomichi, Japan in 1936. In 1961, attracted by its individualism and freedom, he moved to California. His work has been exhibited world-wide and is represented in such museums as the Metropolitan Museum of Art, Hirshhorn Museum, and the Tate Modern, London. ...

"In my career I have painted about issues from gay marriage, American style confessions on TV talk shows, recent priests' confessions, politics, international affairs, censorship, invasion of privacy, gender, sexual preference, religious discrimination, the Impeachment Trial, Viagra, and AIDS to air and water pollution, toxic shock syndrome, American fast food and culture invading the world, international tourism and terrorism, and culture clash and beyond to current series on today's mass media, cloning and internet culture (often as seen through the eyes of an up-to-date Adam and Eve)." 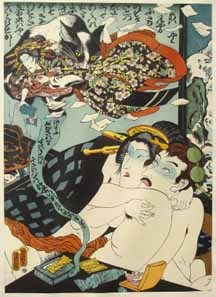 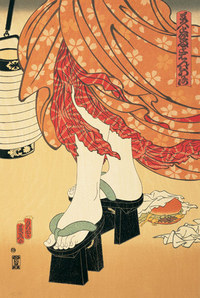