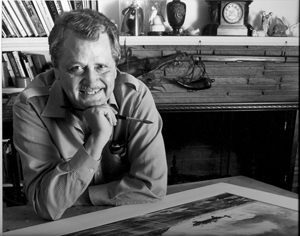 In 2007, William B. Major’s (‘52, Fine Arts) works appeared beside those of Otis colleague Tyrus Wong ('32) (and Lillian Michelson) as part of an exhibition, “The Art of the Motion Picture Illustrator,” at the Academy of Motion Picture Arts and Sciences.AMPAS notes: “The impressive skills of these men define an era when the film industry prized art school training and an ability to paint and draw quickly at the highest professional levels. These accomplished fine artists sketched and painted innumerable scenes for each film, drew hundreds of pages of storyboards, and illustrated key sets; they enabled production designers to convey their ideas to directors, facilitated set construction, and helped directors and cinematographers alike visualize their most important shots." ...

A formative early experience for Major was working for Paramount on Cecil B. DeMille’s The Ten Commandments (1956). He spent most of his career at Paramount and Universal, with a brief stint at Disney. Other films he left his indelible mark upon included Tom Sawyer, Huckleberry Finn, and Dick Tracy. 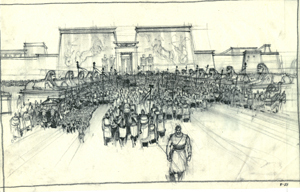