In this first in our series of interviews with recent Otis graduates from the Class of 2022, we spend time with Ireen Chau (’22 BFA Digital Media, Animation), an Academic Excellence Award recipient who originally is from San Leandro, California. Chau has already accomplished one of her life’s goals by publishing her first book last year, a fantasy novel called The Herbwitch’s Apprentice—with an illustrated version just hitting Amazon—well on the way to fulfilling her dream of being a children’s book illustrator. Read below for more on Chau’s time at Otis College, how she got through the pandemic and virtual learning (hint: she overcame the challenges and got straight A’s that year), and who her mentors were. 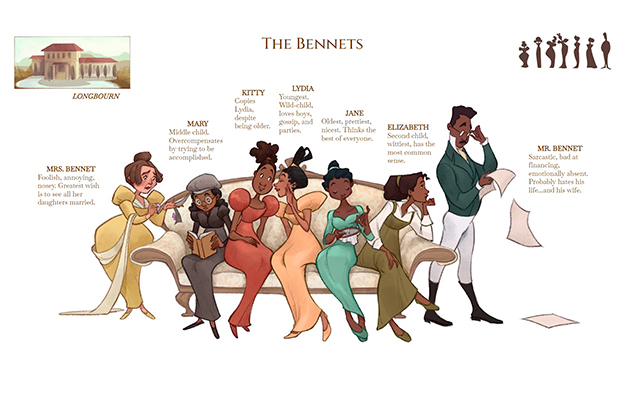 What type of work do you create?

I’m a character designer and illustrator. I’m primarily a digital artist and I do most of my work in Procreate on my iPad. My style is inspired by western animation, and I especially enjoy drawing historical or historically-inspired characters and aesthetics. I aim to tell stories with my work, whether it be through character designs for animation or illustrations for books.

What brought you to Otis College?

In high school, I didn’t think going to art school was an option. My parents enrolled me in a college prep institution geared toward getting kids to “good” colleges with “real majors.” Pasted on the stuffy beige walls were names of successful students and the Ivy League universities they went to: Yale, Stanford, Harvard, Cornell, Princeton—you name it. I wondered if my name would ever end up there. During my meeting with the head of the program, he asked me what I liked to do. “I like to draw,” I said. He stood up, took me around the building, and pointed to a few professional paintings that were displayed.

“Can you draw like this?” he asked. I, being 13, said no. “Then you should keep it as a hobby, because when you grow up you’re going to have to eat.”

That conversation made it clear to me that any art-related path—at least the type of art I liked to do—was illegitimate and impossible. The program made me pick a major when I enrolled. I’ve always been somewhat of a contrarian, so I chose graphic design, thinking it was my one chance at getting a “legitimate” art career. As a result, my academic counselor advised me to go to a graphic design summer program so it would look good to the colleges I applied to. Otis’s Summer of Art program came up in my research. I went, and though I stared longingly at the character design class, I enjoyed the courses I was taking very much.

College application season came with a vengeance. I applied to at least 20-something schools, none of which I was particularly excited about. Then came an email from Otis, letting me know that the application fee was waived for Summer of Art students. I applied. Not only that, I applied as an Animation major. Wild.

So here I am, four years later. I doubt my name and college ever made it on that stuffy beige wall, but I could care less.

What is your proudest achievement while you were a student?

My proudest achievement while I was a student was fulfilling my childhood dreams and becoming an author. I wrote and published my first novel in 2020-2021, then wrote my second soon after. I came out with the illustrated edition of my first in May 2022. I think the pandemic and having so many of my classes centered around storytelling created the ideal atmosphere to sit down and write.

Describe some of the bigger challenges you’ve had to overcome during your time at Otis?

When COVID hit during my junior year, I felt my education was thrown out of whack. Plans were ruined, everyone was scrambling. I had no idea what the future held. I was in a privileged position, being able to go back home and live with my parents, but home wasn’t the best environment for classes. I remember being super embarrassed talking during Zoom while my dad was behind me at his desk doing his thing. And not to mention the life drawing classes! My screen brightness was ALL the way down so I didn’t accidentally scandalize my parents. I felt like I was one step behind and missing out on parts of my education during that year, especially since a lot of the classes were so computer/tech based. My poor laptop was hanging on by a thread trying to work in Unreal or render Maya scenes. I don’t think I even knew what compositing was until we were done learning Nuke. It was ridiculous. Hilariously enough, I got straight A’s all of junior year. I guess I work well under pressure, but I prefer not to.

Who are some of your mentors at Otis, and how have they impacted your goals and experience here?

A class I thoroughly enjoyed during my time at Otis was Life Drawing in Foundation. Not only did it help me grow as an artist, but my professor, Bill Eckert, was definitely a mentor figure during my first and second year of college. I was not a stand-out student in high school, non-academically speaking. Teachers barely remembered my name in the classroom, or confused me for other East Asian girls, which is another topic in and of itself. Bill, on the other hand, is very good with names. That seems like a silly thing to say, but it truly meant a lot to be remembered. He had no shortage of encouragement for me, and though I still had my high school shyness about me, he asked me to be his [teacher’s assistant] the following year. I don’t think I would have gotten that experience helping other students if he hadn’t asked. For that, I am grateful.

Another professor I would like to thank is Ursula Burton. She gave me great advice during my senior project classes, both professional and project-based. Ursula exudes an energy that makes students feel seen and heard. If you’ve ever read or watched Matilda, she is a real-life Miss Honey. I’ve had the luck to have both her and Bill my last semester. They instilled in me a confidence that wasn’t there before. They’re both such uplifting professors, and in my opinion, that’s the best kind.

What are your career goals and plans for the future?

I would love to become a children’s book illustrator in the long run, so I plan to find an agent in the near future. As much as I love character design, I don’t think I’m quite ready for feature animation. That being said, dreams and plans change and I am open to that. I will keep working on my skills in the meantime!

Sky’s the limit: What would be your dream project?

That would be illustrating a middle-grade novel for an author I admire, Shannon Hale or Jessica Day George. I feel like illustrated novels for tweens and teens aren’t really a thing in the traditional publishing market, but it would be a dream if they were. I would be so into that.

What is your current mantra?

“Fake it ’til you make it.” I don’t think the imposter syndrome will ever go away, but I’ve gotten much better at presenting myself and my work professionally thanks to my time at Otis.

What song or band got you through your time at Otis and why?

Senior year I was listening to a song called “Don’t Lose Sight” by Lawrence on repeat. They’re a soul-pop group and I love the subject matter of their songs. In this case, “Don’t Lose Sight” is about feeling burnt out in an industry, something I was afraid was going to happen to me. The song is upbeat and tells you to not lose sight of why you’re doing this in the first place. It’s so catchy, I highly recommend it!

What artist or designer would you want to have dinner with and why?

Anoosha Syed. She’s an award-winning children’s book illustrator who originally wanted to go into animation. She posted her entire career story on her Twitter and YouTube channel, and it’s so inspiring. She says that it’s okay if you don’t achieve your dreams, because it might lead you to a new dream that’s better for you.

I love it when established artists talk about their struggles getting started. A career path isn’t linear, no matter what college prep programs or colleges themselves imply. I’ve been coming to terms with that in the past few months, so I would love to talk about that with her!

Photo and images courtesy of Ireen Chau. Embedded image is a character study of Jane Austen’s Pride and Prejudice reimagined as an animated film with colorblind casting.