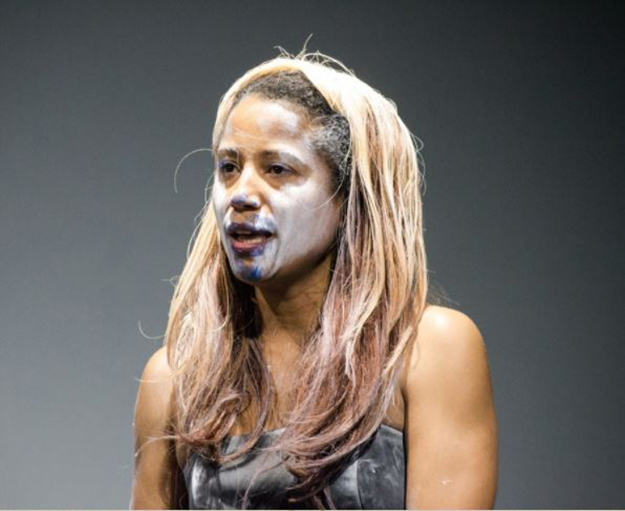 Dell Marie Hamilton is an interdisciplinary artist, writer, and independent curator whose artist talks, performances, and collaborative projects have been presented to a wide variety of audiences in New York at Five Myles Gallery, Panoply Performance Lab, and MOCADA, as well as in the New England area at the Hood Museum, the Isabella Stewart Gardner Museum, MIT, Boston University, the Museum of Fine Arts/Boston, the ICA/Boston, and the Rhode Island School of Design Art Museum. She has also frequently performed with Afro-Cuban artist Maria Magdalena Campos-Pons at venues such as the Guggenheim Museum (New York), the National Portrait Gallery (Washington, D.C.), and the Peabody Essex Museum (Massachusetts). Most recently, Dell became the first visual artist to present a performance artwork at the Clark Art Institute in Williamstown and participated in the 13th Havana Biennial as part of Campos-Pons’s curatorial project, Intermittent Rivers, which was ranked by Hyperallergic.com as one of 2019’s top international exhibitions. Working across a variety of mediums including performance, video, painting, and photography, she uses the body to investigate the social and geopolitical constructions of memory, gender, history, and citizenship. With roots in Belize, Honduras, and the Caribbean, she frequently draws upon the personal experiences of her family as well as the folkloric traditions and histories of the region. In 2019, Dell also presented her first solo show, All Languages Welcomed HERE, which was recently reviewed by NKA: Journal of Contemporary African Art, and her curatorial project, Nine Moments for Now, was ranked by Hyperallergic.com as one of 2018’s top 20 exhibitions in the U.S. To explore her work, follow her on Twitter and Instagram: @dellmhamilton.