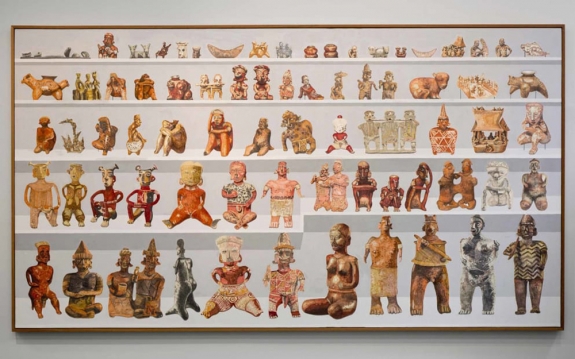 Gala Porras-Kim is an interdisciplinary artist living in Los Angeles who was born in Bogotá, Colombia. She has received a Bachelor's degree, and a Master's of Art degree in Latin American Studies, both from the University of California, Los Angeles, as well as an MFA from the California Institute of the Arts. Her work is made through the process of learning about the social and political contexts that influence how such intangible things as sounds, language, and history have been represented through methodologies in the fields of linguistics, history, and conservation. Her work has been exhibited at the Los Angeles County Museum of Art (2017), and has been featured in solo shows at the Headlands Center for the Arts (2017); Commonwealth and Council, Los Angeles (2010, 2012, 2013, 2015, 2017); and LABOR, Mexico City (2017). Her work has been exhibited at the Whitney Museum of American Art, New York (2017); FRAC Pays de la Loire, France (2016); 44th Salon Nacional de Artistas, Pereira Museum, Colombia (2016); the Los Angeles Public Art Biennial (2016); the Made in LA Biennial, Hammer Museum, Los Angeles (2016); and Ex Teresa, Mexico City (2014). Porras-Kim received a Rema Hort Mann Foundation Award (2017), Joan Mitchell Foundation Award (2016), Creative Capital Grant (2015), Louis Comfort Tiffany Foundation Award (2015), and California Community Foundation Fellowship (2013).