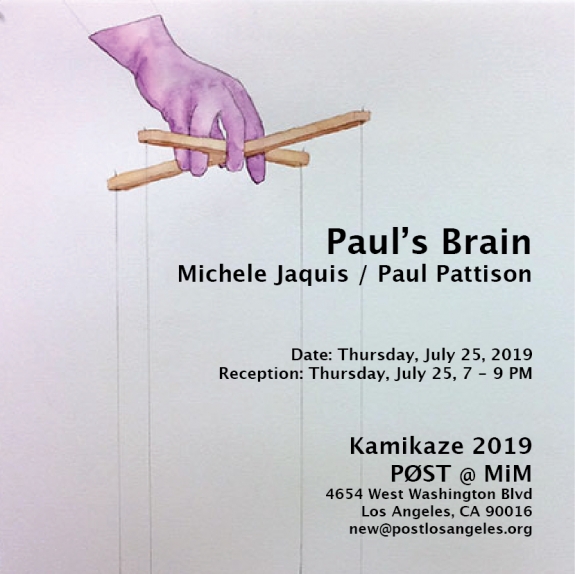 Michele Jaquis, Otis Director of Interdisciplinary Studies, and Paul Pattison will have a two person exhibition as part of PØST's Kamikaze series.

Michele Jaquis and Paul Pattison met in 1996 while they were students at Burren College of Art in Ireland. They stayed in touch after Michele returned to the United States and Paul often visited whichever city she was living in. They began collaborating in 2007 by recording a conversation about Paul’s experiences with epilepsy and the memory loss, depression, and addiction that came with it. Their intention was to develop a two-person exhibition of his relief prints with her videos and sculptures. For various reasons this project was put on hold and several years later Paul asked Michele if she’d like to make a documentary about his epilepsy, completely forgetting that they had started that project already. Paul died in 2015, at which point Michele resolved herself to complete the work in his honor, using the recorded conversation as a starting point from which the rest evolved. See this work for one night only, as part of PØST's Kamikaze Exhibition series.

This is the tenth year anniversary of the Kamikaze exhibits. PØST is now nomadic. The exhibits will be hosted at MiM gallery. In the month of July, PØST will present thirty-one different exhibits. The 2019 July Kamikaze exhibits continue in the same tradition as the other Kamikaze exhibits that have been presented at PØST since September of 2009. Difficult times invite difficult gestures. By design, these exhibits remain close to art and distant from the other stuff. In the future, a book will be produced for each Kamikaze month.